Download streaming videos from Paramount Plus, including shows and movies, to your local HDD as MP4 videos, in 720p or 1080p resolution, with 5.1-channel audios and subtitles of your choice.

How to Download CBS Shows for Offline Play [Free & Fast]

Summary: Are you accustomed to streaming CBS shows or watching CBS TV shows with your family on a large screen? What if you can download CBS All Access TV shows? This post offers you the optimal solution to access CBS new shows for offline play.

Do you enjoy watching CBS TV shows via cable TV or streaming CBS shows online? After knocking off from the workplace, most people tend to open TV waiting for the CBS shows tonight. That would be a family routine. Just imagine if you could download CBS All Access TV shows or movies, what would you do? Download new CBS shows to watch them on mobile devices whenever possible. You can repeat playing your favorite shows on CBS. In this post, you will know how to download CBS shows for offline viewing.

PART 1: CBS: What You Need to Know

To access the shows on CBS, it's necessary to figure out the following questions.

Why is CBS so popular?

CBS, short for Columbia Broadcasting System, is an American commercial broadcast television and radio network owned by ViacomCBS through its CBS Entertainment Group division. It is characterized by fans as entertaining, great for local news, original, informative, and reliable. CBS shows are captivated by high-quality cameras that shoot natively in 1080p, while Fox’s cameras shoot in only 720p.

What channels does CBS own?

How many CBS channels are there? CBS holds over 200 local CBS TV stations throughout the country. All of the channels fall into different categories. 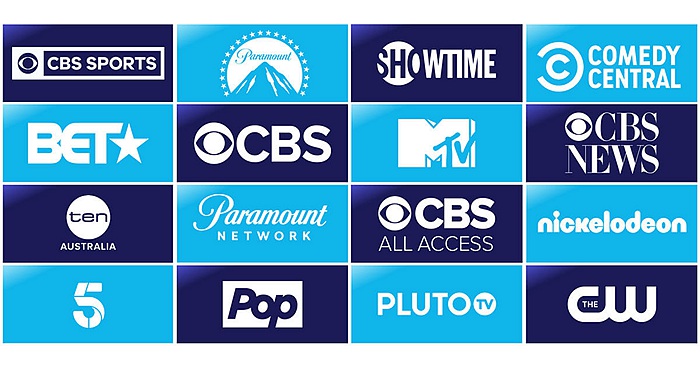 Is CBS a free channel? CBS is available for free with a quality TV antenna via Over-the-Air (OTA) TV, which means you can watch CBS channels without streaming or Cable TV contract.

In the past few years, the media landscape has changed dramatically with the rise of streaming services. CBS was the first major US TV network to start its own streaming service in 2015, called CBS All Access. It is a live and on-demand TV streaming service where you can find all of your favorite CBS TV shows and movies. Years later, the service boasts over 4 million subscribers and an increasing catalog of licensed TV shows and movies, plus its originals like Star Trek: Discovery, Star Trek: Picard, The Good Fight, and The Twilight Zone in the US. Besides, the service holds live sports streams and local news coverage, which attracts most fans.

As the CBS CEO Leslie Moonves puts it, “CBS All Access is another key step in the company’s long-standing strategy for monetizing our local and national content in the ways that viewers want it.’’ CBS All Access is not free. It offers two subscription plans: Limited Commercial ($5.99/month) and Commercial Free ($9.99/month). To save cost a bit by an annual plan, you can turn to the limited-commercial plan ($59.99/year) and the commercial-free version ($99.99/year). This service has some pros and cons.

Truth is that CBS All Access works in a web browser on desktops and there's a standalone CBS app on Windows 10. The app is compatible with Android and iOS, in addition to Roku, Apple TV, Amazon Fire TV devices, Xbox One, and PlayStation 4 consoles. The app works similarly to other streaming service apps. Just hit the Download icon next to any episode. However, there are some limits when it comes to downloading the shows on CBS All Access. 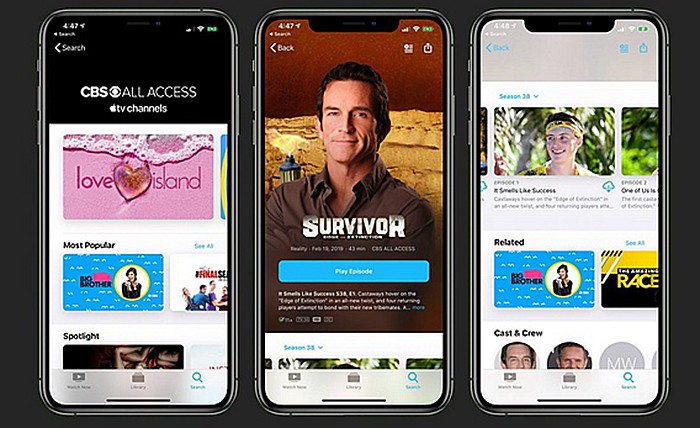 First, not all of its network CBS shows support offline downloads at the time of release, even if most of the networks' original shows are eligible. If the CBS news shows have license restrictions, you cannot download the new CBS shows for offline play.
Second, subscribers can download up to 25 videos at any time and keep the same videos on up to 5 devices.
Then, CBS All Access will delete videos 30 days after you have downloaded them or 48 hours after you start playback.
Finally, though the CBS mobile app launches quickly, it doesn't prompt you to log in when it runs. You have to sign in or sign up for a new account by swiping from the left to open the hidden menu. Similar to the top navigation bar from the web interface, this menu includes options for Shows, Live TV, Movies, Schedule, Shop, and Settings. Go to the settings, you can adjust content downloading options and change video streaming quality as needed.

Considering these limits of offline downloads, you need to blaze a new trial if you anticipate downloading CBS shows for offline playback forever and whenever. Move on to the next part for a detailed solution.

Note that this DRM video downloader is designed to remove DRM protections from videos on streaming service platforms, thus enabling you to get DRM-free downloads for offline play whenever possible. No need to worry about the playback limits after downloading CBS shows. Before subscribing to the full-featured version, you can enjoy this downloader on a free trial basis. Three titles can be downloaded for free. Act now to get your wanted shows on CBS.

After knowing the flagship features of CBS All Access, now let’s get down to figuring out how to download shows on CBS All Access free and easily. 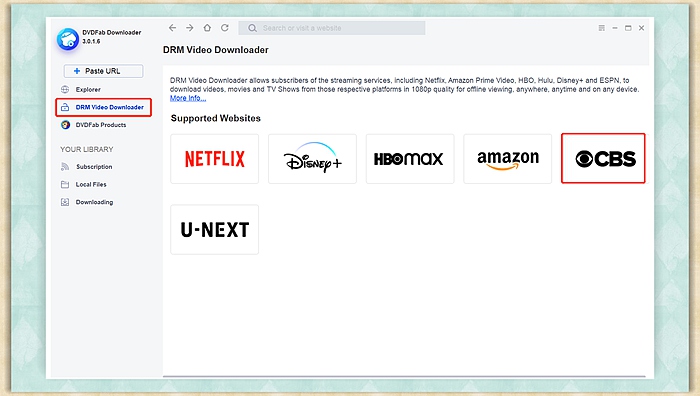 After signing in to your CBS account, click the Movies or TV Shows from the top navigation menu. Find your wanted movie or TV show, click the Play button. 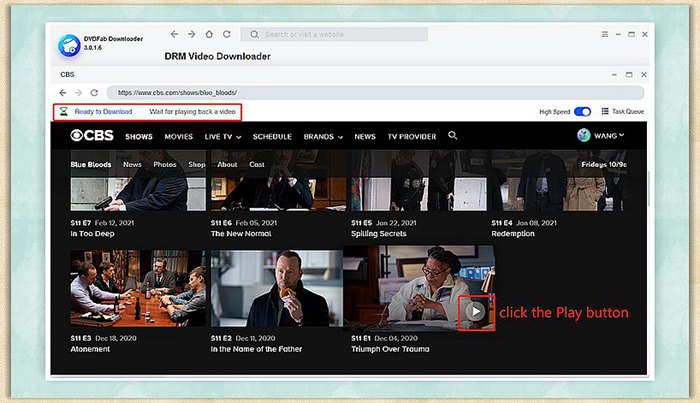 Once you click the Play button, there will pop up a Download option or Add to the download list on the playback interface. Click the Download button, there will be a Downloading (downward-facing icon) in the upper left corner. That means your CBS shows or movies are being downloaded in the background. 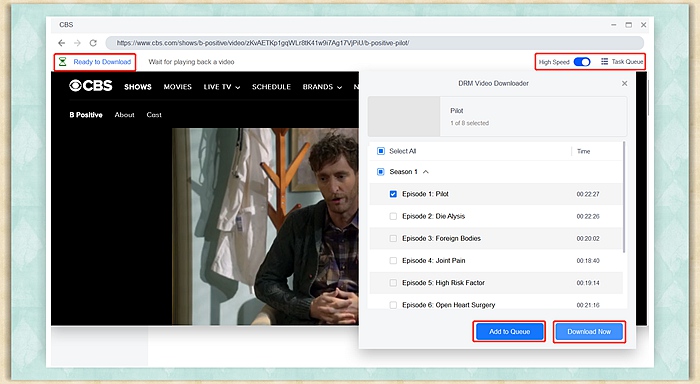 These are the simple steps as to how to download shows on CBS All Access. Of course, if you want to download CBS TV shows on your mobile, just install the CBS app on your Android or iOS mobile. Log in to your account and select your wanted CBS shows to start the download.

It is an indisputable fact that Apple TV+, Netflix, Amazon Prime, and Hulu offers 4K streaming content, and some of them like Apple TV+ and Disney+, support HDR, Dolby Atmos, and Dolby Vision standards, the maximum streaming resolution of CBS All Access is limited to 1080p and it merely supports 5,1 surround sound for certain movies. If you want to watch the downloaded CBS shows on the standard Blu-ray home player, remember to burn the downloaded 1080p videos into Blu-ray movies via the professional Bluray Creator. Otherwise, go straight to watch your downloaded streaming video on the best 4K media player, DVDFab Player 6.

After downloading the shows on CBS, it’s imperative to enhance the video quality from 1080p to 4K for a better viewing experience on your advanced 4K media player. To upscale video quality, here comes the best video enhancer for your option. Make the best of its free version.

In this post, you have understood CBS, CBS All Access, and the best way to download CBS All Access TV shows for offline viewing. Aside from the CBS app enabling CBS shows to be downloaded for offline play, never forget to try out the DVDFab DRM Video Downloader. It will bring you an unexpected experience. Want Netflix download for free play offline? This downloader will help you out as well.

DVDFab Paramount Plus Downloader enables you to download your favorite TV shows and movies from Paramount Plus to your local hard drives saved as premium MP4 videos either in 720p or 1080p resolution depending on your choice. It also features a batch mode allowing you to download up to 5 videos concurrently at 2x faster with hardware acceleration.