Will UHD Blu-rays Play on a Common Blu-ray Player?

If you’re the type of person that likes watching movies in the highest possible quality you’re probably no longer satisfied with regular Blu-ray discs. This format may have been the best a few years ago but that’s no longer the case anymore thanks to Ultra High Definition, better known as UHD. The main difference between UHD and Full HD, which is what regular Blu-rays use, is the resolution. While Full HD videos use the 1080p resolution, UHD goes much higher and that results in a better video quality. However, the larger resolution also means that UHD videos take up quite a bit more space when compared to Full HD videos.

Will UHD play on a Blu-ray player?

So now the logical question is will UHD play on Blu-ray players designed for 1080p? Unfortunately, the answer is no. A regular Blu-ray player is able to read discs as large as 50 GB but UHD videos can easily reach 70 GB in size. The size itself is just part of the problem because UHD videos also require a specific codec that regular Blu-ray players are not able to support. In that case, how will UHD play on a Blu-ray player? Under normal circumstances, all you would need is a specialized UHD Blu-ray player, which is a device specifically designed to handle this format. Of course, the downside of this is that you would have to buy a new piece of equipment that is quite costly so this option is not exactly ideal.

The other option would be to simply convert your 4K UHD Blu-rays to a format that is supported by your regular player, which in this case is 1080p. A UHD to Blu-ray converter is a much cheaper option than spending hundreds of dollars on a new player. You also have to go out and buy the new player or wait until it gets shipped to you so you won’t be able to start using it immediately. On the other hand, you can simply download and install a UDH to Blu-ray converter and use it whenever you want.

DVDFab UHD to Blu-ray Converter is the Logical Choice

If this second option sounds much better we recommend using DVDFab UHD to Blu-ray Converter. This software was created specifically to allow for easy downscaling from UHD to 1080p while also preserving as much of the original quality as possible in the process. Since videos are converted to a lower resolution, the quality will naturally not be exactly the same but the difference is barely noticeable both in terms of video and audio. The software also gives users the option of choosing between BD50 1080p and BD25 1080p during the conversion process in order to make it easier to then burn the output files on blank discs. So how will UHD play on Blu-ray using this software? Well, let’s take a quick look at how the UHD to Blu-ray converter works.

1. UHD to Blu-ray conversion only works on DVDFab 64-bit so make sure you download the correct version. Once you’ve downloaded and installed the software, look for the Copy module in the menu bar. It’s the first one on the left. Then insert the 4K UHD Blu-ray disc to your optical drive. DVDFab will load it automatically. 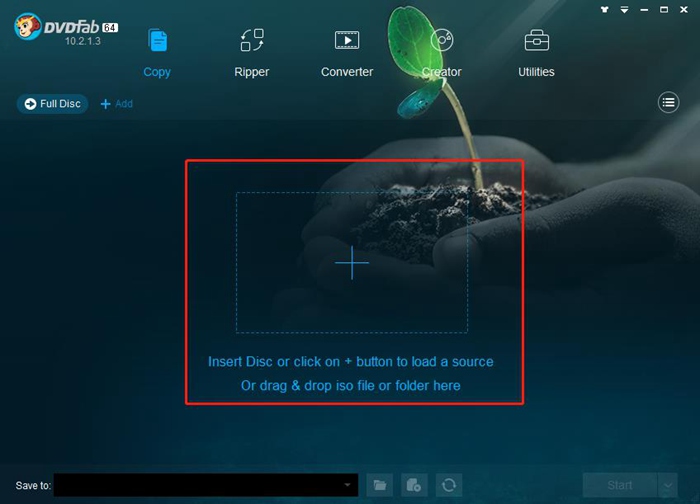 2. Now proceed by going to the Copy Mode Switcher located in the upper left corner. There are a number of options available here but the one we’re interested in right now is called UHD to Blu-ray. Select this option and move on to the next step. 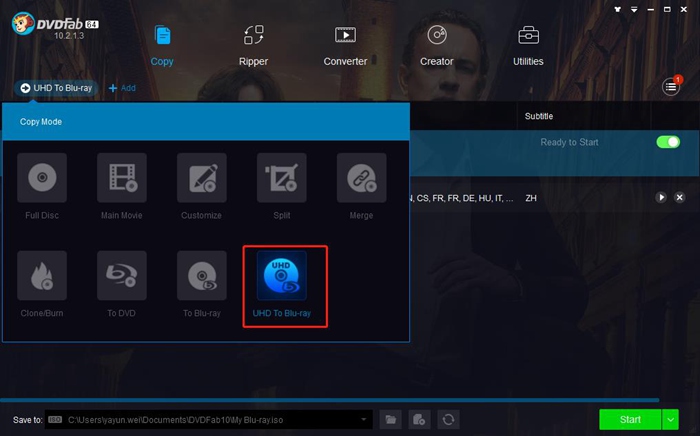 3. Before you being the conversion process itself it might be a good idea to look at some of the available options and see if you want to make some changes. For example, you can use the Choose Other Titles button to pick specific titles or chapters that you want to convert or use the Settings button to rename the output and make a few other changes. The Settings menu also allows you to pick between BD50 and BD25 so pick the option that suits you best. You’ll also find a Custom Menu button here that contains a few more useful options including editing tools that allow you to customize various other aspects of the output file. 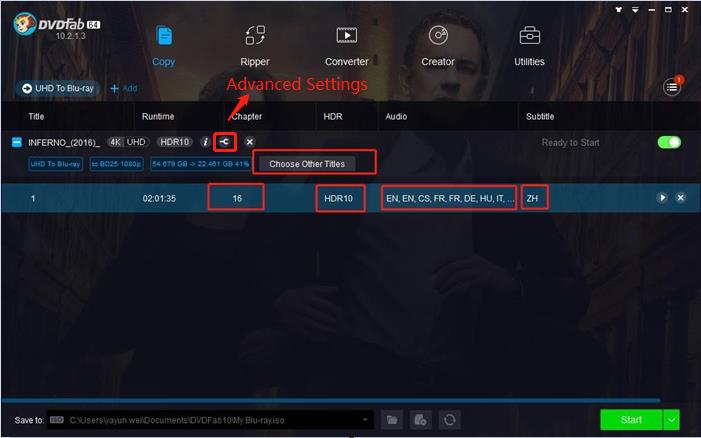 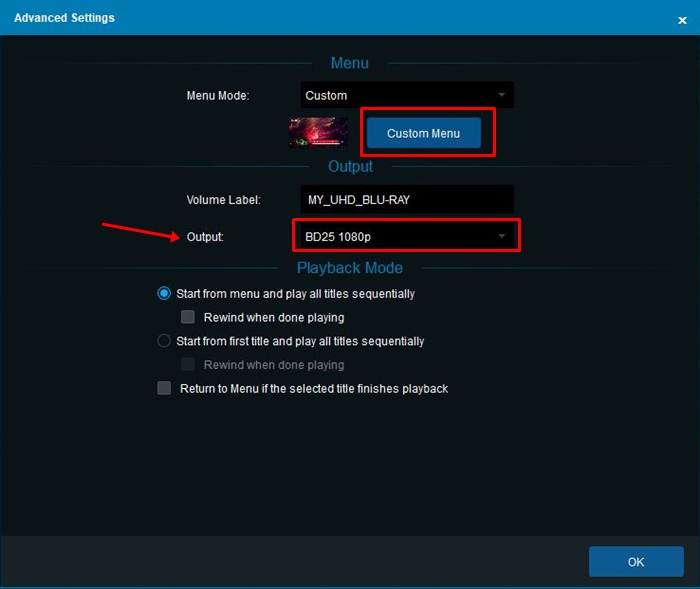 4. After making all the necessary changes it’s time to decide whether you want to burn the converted Blu-ray to a blank disk or saved it as an ISO file on your computer. Once you’ve made your choice simply hit the Start button and wait a few minutes for the UHD to Blu-ray converter to finish processing the movie. 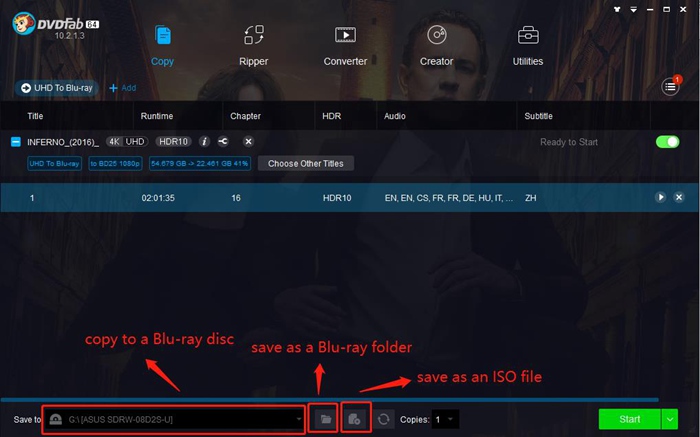 Hopefully, now you have a better answer to the question will UHD play on a Blu-ray player? If you try playing a UHD file on a regular Blu-ray player it won’t work but you won’t have any issues running it if you use a converter. We recommend using DVDFab UHD to Blu-ray Converter for this process because it’s fast, simple to use, and comes equipped with a lot of useful tools and features. But if you’re not sure if this is the right tool for you make sure to check out the free trial and see for yourself what the software has to offer. 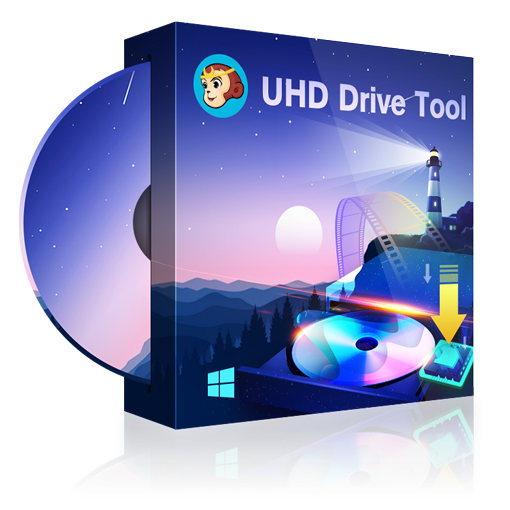