Summary: This article aims to give you a clear clue of top 5 best 3D Blu ray player that can be used to play your favourite 3D Blu ray movies. Meanwhile, you are suggested to grasp how to play 3D Blu ray movies with peak quality on the household Blu ray 3D player free and easily.

Are you looking for a professional 3D Blu ray player that enable you to enjoy the latest best 3D Blu ray movies whenever possible? When coming across your favourite 3D Blu-ray movies but unable to use your existing video player program to play them, that will be the most embarassing and annoying thing. No worry!  There is a whole range of 3D Blu-ray player software that can get this done for you. Not only will you be able to watch high quality movies in this category, but also enjoy other features that these 3d bluray player programs might offer.

Here we will discuss top 5 best 3D Blu-ray player software that will enhance your movie viewing experience,among which DVDFab Media Player comes out on top.

This all-inclusive media player offers multiple unique features that make it stand out above the rest. It not only can be categorized as best 4k blu ray player but allows for playback with both PC mode and TV mode (the mode is targeted for large screen). Its playback capacity is versatile along with support for 4K Ultra HD Blu-rays, Blu-rays, DVDs and various video (H.265 and H.264) formats. The menu playback on 4K UHD Blu-rays/Blu-rays/DVDs is one of its salient features. This particular 3D DVD player and Blu ray 3D player software makes it cut out a niche for the top ranks due to its advanced visual-audio output features such as Dolby TrueHD, DTS-HD Master, Dolby Atmos, DTS:X as well as others. The best 3D Blu ray player is also known for its compatibility features as well as the stability and smoothness of playback. 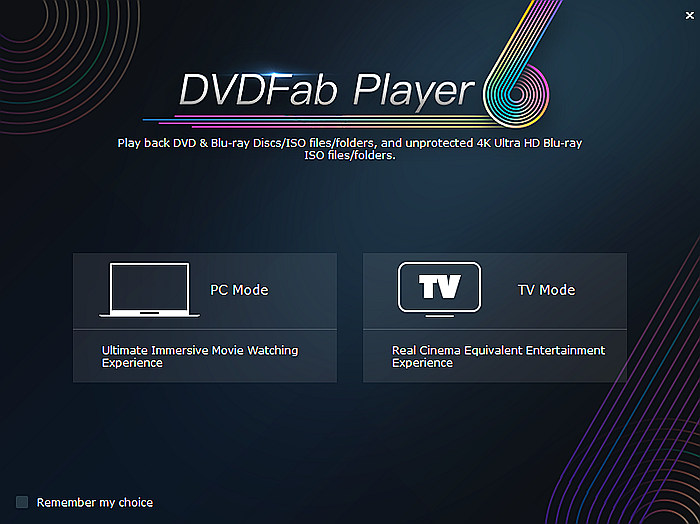 Seen from above, this best 3D Blu ray player software can not only play your best 3D Blu-ray movies, 4k 3D Blu ray movies, but also playback DVDs and all sorts of videos including 4K and HEVC.

This is one of the most anticipated player software that Windows 10 users can opt for. Indeed, it would show up among the top results in 3D Blu-ray player software Windows searches. This particular software offers several features. For instance, there is a built in codec pack that is feature-rich. It can not only support 3D Blu-ray movie formats that include M2TS and MTS, its versatile codec pack can add the program to be a universal media player.

The performance of this 3D Blu-ray player software is great with Mac Sierra as well as on Windows 10. There are “add on” features that one would get with this software such as AirPlay streaming and download of online videos. Users will find this software a lightweight application to download on their system. To make things more interesting, this software offers handy lists of 3D movies from popular websites. If you have home theater system available it would be great to have this Blu ray 3D player software downloaded, especially if you have 3D glasses ready. Anyway, this free 3D Blu ray player has no ample advanced features compared to other options.

This 3D Blu-ray player software for PC is SNS compatible. It is favored player software among many users since it offers Blu-ray 3D movies to be watched or streamed without any problem. You could watch from online websites or from licensed physical copies. PowerDVD has support for an extensive range of file formats such as MKV, MP4, MOV and AVI and also can play 4K videos.

There are certain features that impress you is its live support, which enables real-time share with others as to what you are watching. It is made possible by PowerDVD SNS plug-ins that can run 3D Blu-ray movies which are not on optical discs.

This free 3D Blu-ray player software is categorized in the swift 3D category. There are several beneficial features to enjoy with this program, especially the fact that it does not take up much CPU power. In this aspect, it takes up only about 4% of CPU in running mode that translates to a sleek performance, similar to 5K player.

Free 3D Blu-ray player as it is, this program performs with ads. For a freeware that supports 3D Blu-rays and DVDs, this player software is a good choice as with other 3D DVD player and 3D Blu ray player.

This particular 3D Blu-ray player comes at a price that might look steep, above $100 but there is a unique feature that offers Blu-ray DVD encryption, which helps to bridge the gap between a software application and a physical player for 3D Blu-ray discs. This Blu ray 3D player program is designed to run any disc that is irrespective of region code. Those who would like to know its features before they buy it can do so for a trial period of 21 days.

Among the above-mentioned best Blu ray 3D player, you’re advised to choose DVDFab media player since it is an all-purpose playback tool for 3D Blu ray player, 3D DVD player, 4K Ultra HD Blu ray, H.265, H.264 and other media files. Once you try out or subscribe to it, you will enjoy all your media files once and for all. Now let’s look at how to play 3D Blu ray movies with this best 3D Blu ray player within 3 simple clicks.

Free download and install this best 3d bluray player software from DVDFab site. Before your final subscription, feel at ease to enjoy this best 3D Blu ray player for free within 30 days. Then load your 3d bluray movie source when it runs. 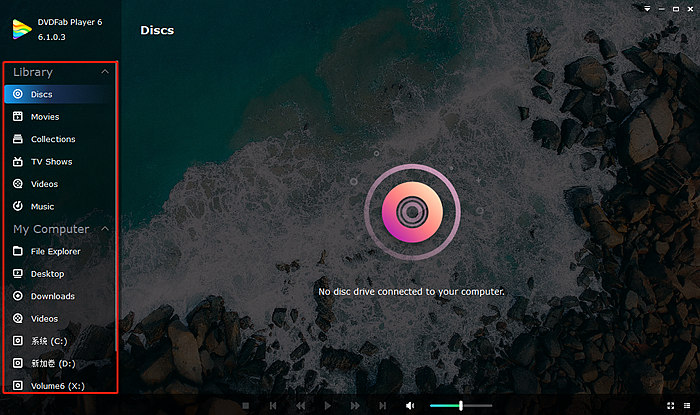 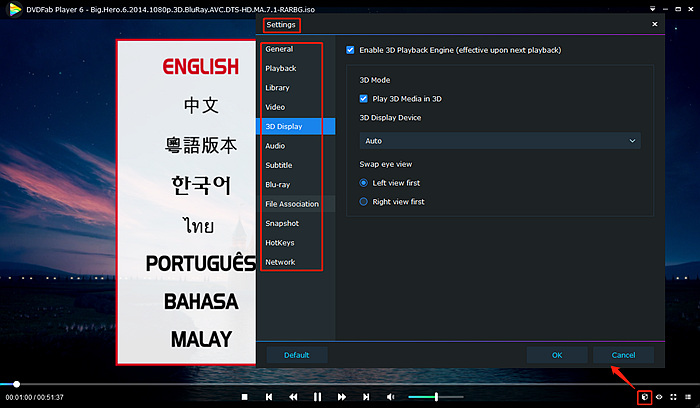 General: select your wanted UI language, launch mode (TV or PC), window size, log path, or auto-check for new version.
Playback: choose playback mode for DVD, Blu-ray or 4K UHD Blu-ray, and set language for menu, audio, and subtitle.
Library: choose your library, update or rebuild library as well.
Video: activate hardware acceleration, HDR mode, and color range
3D Display: enable 3D playback engine and mode
Audio: choose audio passthrough, adjust volume
Subtitle: set size, position, style, and color
Blu-ray: choose your region code A, B or C
Snapshot: capture your wanted snapshot during playback and save as JPG, PNG, BMP for other purpose
Hot-keys: various and flexible hot-keys available to fast control playback
Besides, you can create your own playlist, sort them by type or name. The whole playback will be at your disposal via diverse buttons. Go and explore them on your own.

Once done, hit the Start button to play your desired 3D Blu-ray movie. By the way, if your computer or TV enables 3D configuration, what you to do next is prepare a pair of 3D glasses to enjoy your movie.

When you are investing in a Blu-ray 3D player you need to know how it works and what makes it special. 3D media when written on Blu-ray disc is a format that is superior to HD DVD since it is a blue laser technology that produces faster read and write speed. When you buy the best 3D Blu-ray player it not only plays M2TS and MTS videos, but also other file formats among its features. Also the stereo high profile is something that you can expect in such player software.

By the way, if you aim to upscale video while ripping Blu-ray to videos that can be played on various devices, DVDFab Enlarger AI will help you achieve this aim. It will work seamlessly with Blu-ray Ripper module to rip Blu-ray to 4K videos with better image quality.