Summary: Here is the list of top 10 best free screen recorders. With them, you can record your device (computers and smartphones) screen freely and easily.

Being a smartphone user, one should be aware of all the perks and tweaks of smartphone. You should know each and every “how-to” in your smartphone. One of the how-to’s that most of the people are not aware of is screen recording. It may sound just a joke to you, but it is actually true! Do you know how to record your smartphone’s screen? Confused if you really know it or not? Well, let’s keep the confusion aside and move on to actually show you some of the best free screen recorders. You may ask as to why should I record my smartphone’s screen? There are endless reasons to tell you why you should. To list a few for you, have a look at below reasons:

Now let’s have a look at some of the best free screen recorder so as to record your iPhone screen effortlessly and with ease.

To record your iPhone screen with ease and simplicity, you must have a pro beside you who can help you out on this thing. DVDFab Screen Recorder & Editor for iOS is the best free screen recording software that will just give you what you need.

It is a great software that integrates the iOS screen recording along with editing software under one roof. The tool will seamlessly record whatever is going on the iPhone screen and that too with sound. Cherry on the cake is, you are allowed to make advanced edits with the help of the software’s amazing features. Simply follow below steps to record your iPhone screen with this great tool. 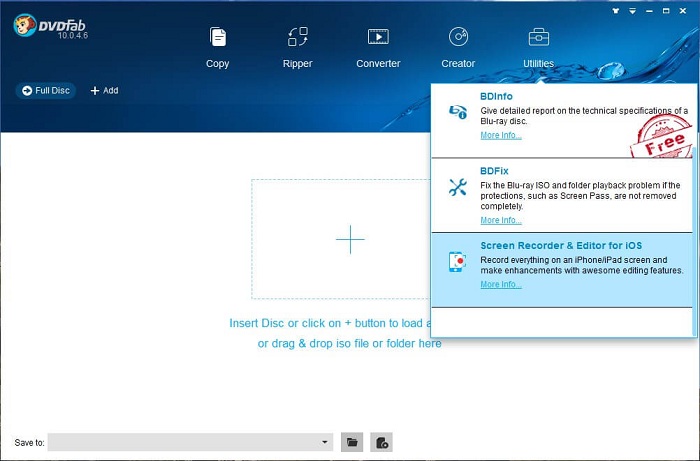 Step 2: Now, you require to follow the instructions displayed on your screen in order to connect your device with the tool via AirPlay Mirroring.

Step 3: The default option is Video-only stream for recording the screen of your iPhone. Also, you can opt to record device’s screen along with audio by toggling the switch. When you finish with the setting work, to start the recording, tap on the red circle. 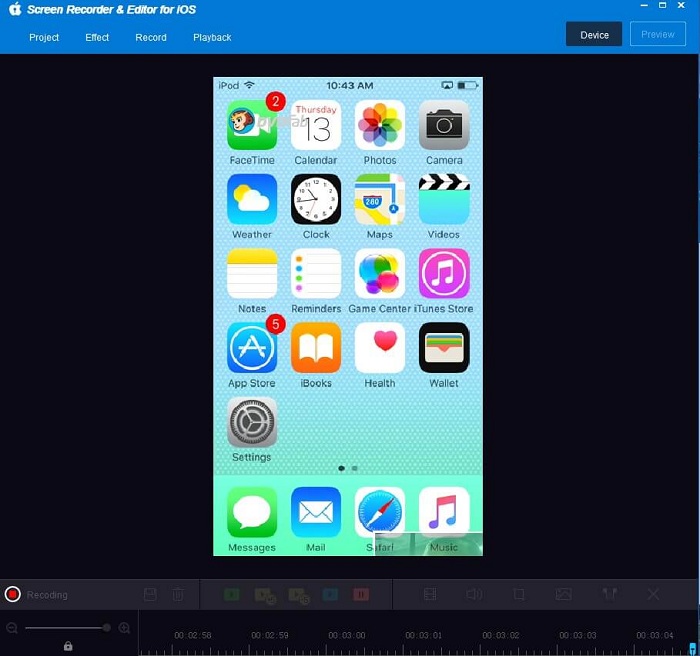 Step 4: Once you are done with the recording process, end the screen recording. Preview button is also present so as to preview the recording; you will find this button at the top right side of the window.

Step 5: You also have options to edit the video recorded. With these editing options, you can remove unwanted clips, crop the needless part from the display, as well as add text along with image watermark to your recorded video. 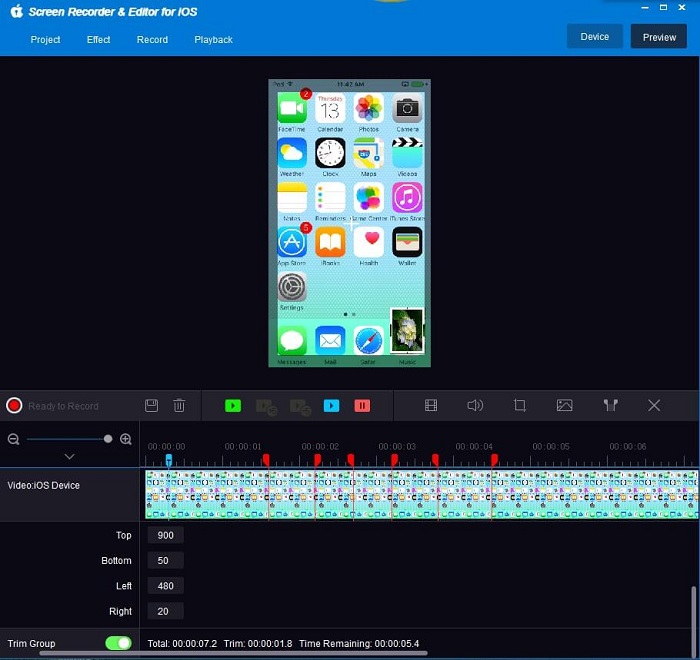 Step 6: When you recording is finished, simply save your video with the Save button present just at the side of Record button. With this, you can export the recorded video in MP4 format.

There are few other free screen recorders present which will record your device’s screen easily.

iRec is among the easiest and well-organized tools used for screen recording of high resolution. The amazing features make the tool stand out in the crowd such as easy-to-use, navigation platform that is very well designed, and provides high-quality video recording. Most of them prefer this tool to record their games or to create tutorials.

Capto is a simple-to-use tool that will aid its users to record their phone’s screen and also provide advanced image along with video editing features. It also bundles smart file manager with speedy sharing options. Other features of Capto are video and image editor as well as dual-type audio editor, screen and web capturing features. 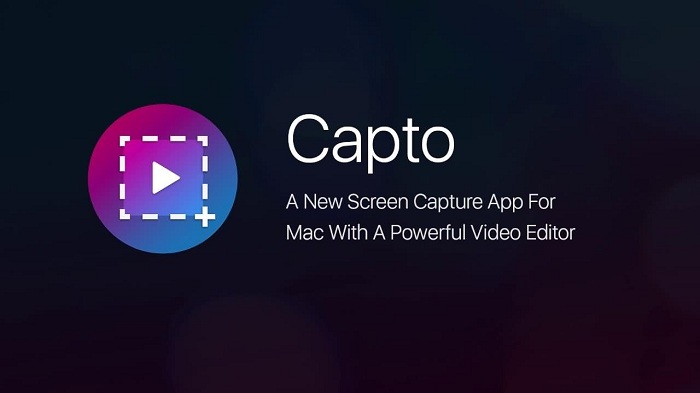 ScreenFlow enables its iOS users to record any particular part of screen very easily. Furthermore, it can also record signals from microphone, video camera, multi-channel audio devices and computer’s audio simultaneously. Other features of the tool include editing any particular part of images and video with transitions, texts, and animations; sharing any type of file with no difficulty; and to create any advanced tutorials videos.

AirServer is considered as an enhanced screen recording tool for PC, Xbox One, and Mac. One can also receive Google Cast, Miracast Streams, and Airplay similar to that of the Apple TV. The enhanced editing features of tool help it stand out I the crowd. Additional features include recording videos on iPhone/iPad along with additional voiceover; enhanced post recording features that enable users to play with brightness, contrast, saturation, hue, flipping of screen, sharpness, and so on options; easily creating game play demos. The tool is also considered as free screen recorder for Windows 10. 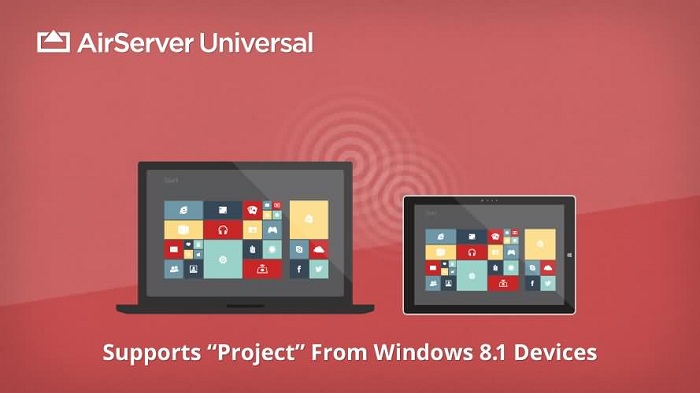 Reflector is a wireless recording and streaming tool that can be used to connect with any other external devices. The recording feature of the tool is compatible with all devices. It has another feature to present and organize various devices with diverse specifications. Additional features include real-time recording, efficient and easy management of all connected devices, media streaming, simple to record screens along with audio, and enhanced security. 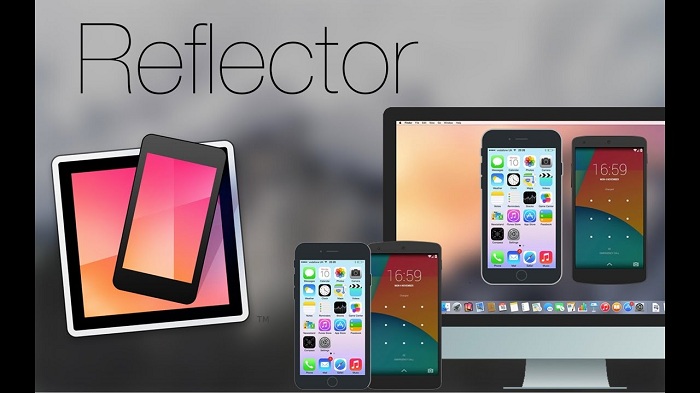 X-Mirage is among the professional tools for Mac and Windows devices. It allows its users to wirelessly stream content and further it also allows to easily record iPhone/iPad/iPod screen. Other features include well-organized recording, can connect with various iOS devices at just single platform, one-click recording feature for more easy and great experience, very swift processing, as well as enhanced editing features. 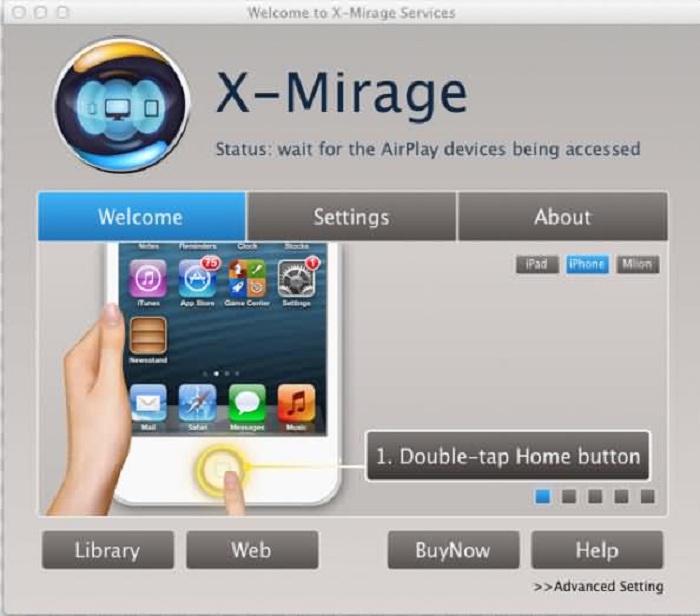 QuickTime Player is also one other option in our free screen recorder list. You just need a Mac with OS X Yosemite/later, device with iOS 8/later, and a lightning cable to use QuickTime Player for recording your device’s screen. You can also edit clips via copy, cut, and paste features; merge various video and audio tracks with this tool. The is has capability to handle different formats of picture, digital video, sound, interactivity, and panoramic images, and so on. QuickTime X works best with Mac OS X Snow Leopard and later versions. 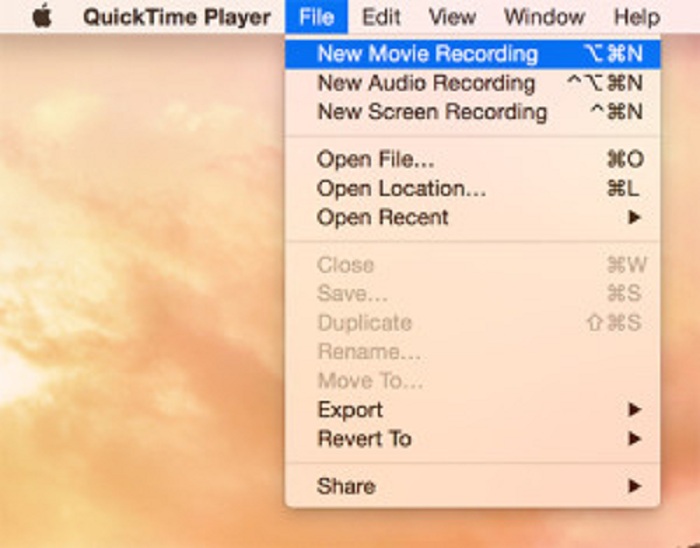 Developed by Shou.tv creative minds, Airshou is best suited for iOS 9. One thing that makes Airshou stand out is the software utilizing hardly any processing power and yet can provide very high-quality recorded videos as output. People opt for this software majorly for recording the games as well as applications; however, on negative point is if it is connected while recording to a microphone, the audio recorded have very much of noise and is not of so good quality. The free screen recording software works fine with portable devices which result in a full screen recording with amazing recording output videos. 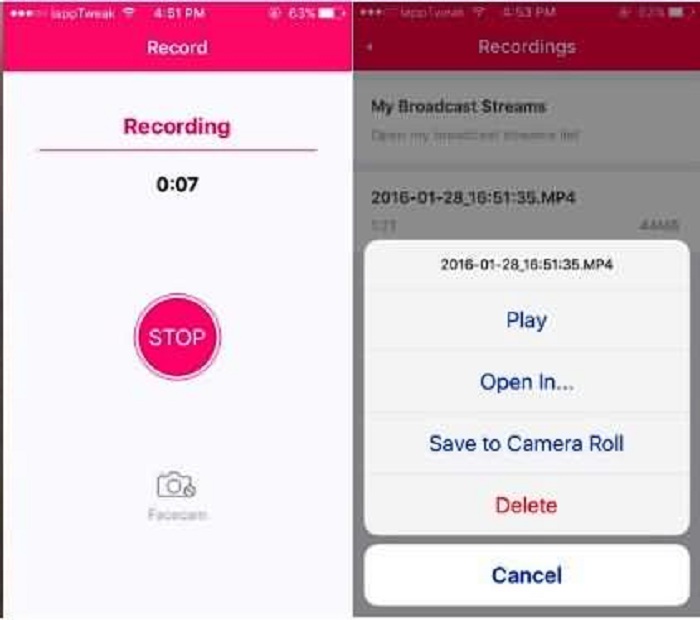 Another free screen recorder on our list is Vidyo. The free screen recording software helps its users to record screen as well as provides active audio controlling features that include the device’s internal voice and the microphone audio simultaneously. A great quality resolution is offered, that is, 1080P along with 60fps. In addition, various great mixing features are also available so as to perform advanced recording tasks for better output. However, the software users just cannot listen to voice from the speaker while the audio sound is recorded. 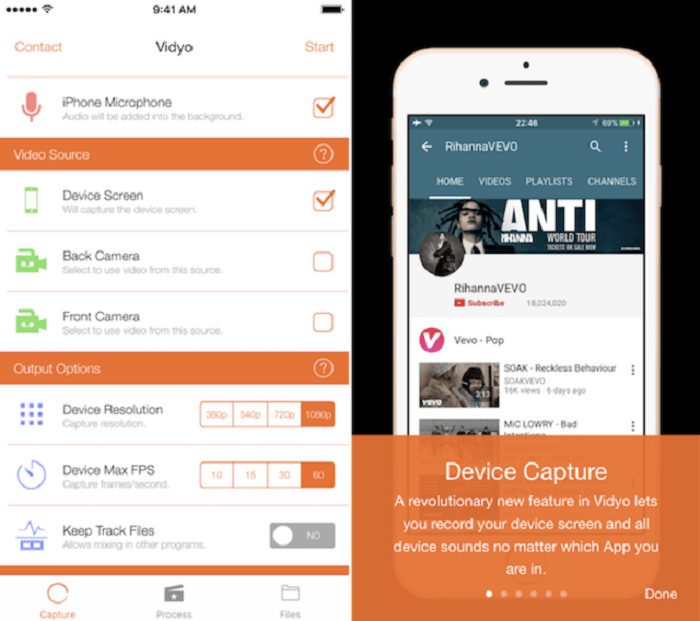 Last, but not the least, another free screen recorder concluding our list is BB Recorder. The free screen recording software helps it users to simply mirror the screen while recording. Also, the software has easy-to-use interface and allows streaming with very ease. It can be used for recording camera, live recording of screen as well as capturing screen for basic purposes. It also has a very simple installation process. One can record the device for a non-stop 2.5 hours. And this come bundled up with HD quality output. For social media purpose, that is for sharing videos on social media, share buttons that are pre-installed are also provided to the users. An easy-to-understand user interface is great such that even a newbie can do all the recording without any additional help with this free screen recorder. 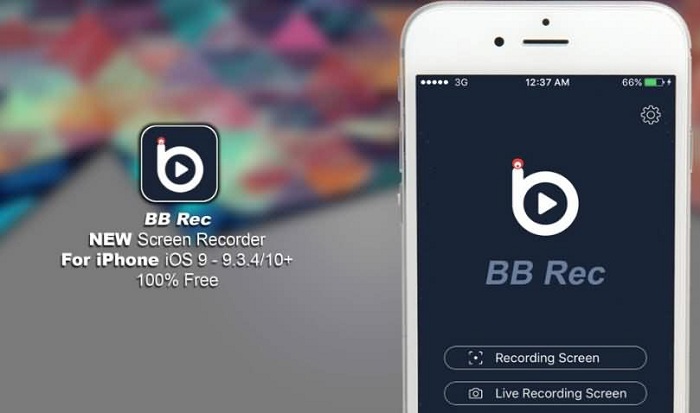