Are looking to burn MP4/MKV to UHD Blu-ray to create your own 4K Ultra HD Blu-rays then this article is surely being written for you. By following this article you’ll be able to create a single 4K UHD Blu-ray disc with lots of videos of different formats. Video formats like MP4, MKV, AVI are most popular today and many of us like to download videos in these formats because of their cross-compatibility across different devices. So, you might have build a video collection overtime by downloading videos in these formats and now if you want them to work on your 4K UHD player then we are here to help you. If you want to burn/convert videos (MP4, MKV, AVI, etc.) to 4K Ultra HD Blu-ray then you have to use DVDFab UHD Creator. Let’s start this article with an introduction to DVDFab UHD Creator.

An UHD ISO or a folder is an exact soft-copy of a 4K UHD Blu-ray disc. When you save the entire 4K UHD Blu-ray disc contents as it is in an image file then it is known as an disc ISO image file. This ISO file has everything same as that of the original disc. You can store this ISO file on your computer and can burn to a blank disc anytime. Just like an ISO, an UHD folder is an exact copy of the UHD Blu-ray disc. For making UHD ISOs and folder you’ll need special software like DVDFab 11 which can also remove Blu-ray protections before making an ISO or a folder. Please find the download link to DVDFab 11 below.

Here is the detailed step-by-step tutorial to burn or convert videos of any format to 4K Ultra HD Blu-ray discs, ISO, or folders.

Click the ‘Creator Mode Selector’ button and click ‘UHD Creator’ to select. Now click the ‘+Add From Local’ button and load your video files. You can load multiple videos, movies of different formats. They will be merged by default. After loading the videos the main program window will look like this below. 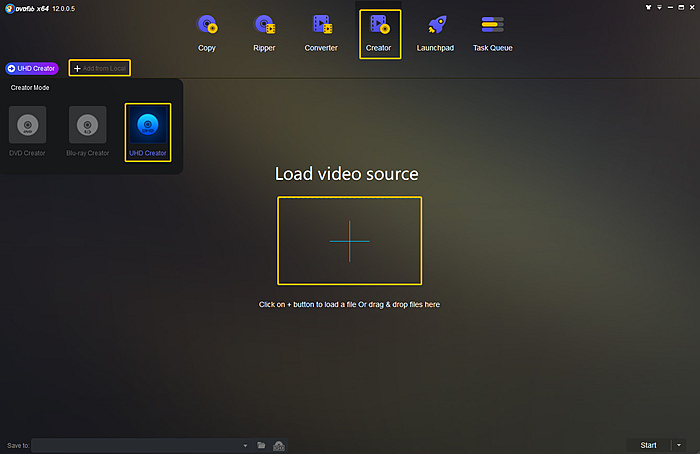 Click ‘Advanced Settings’ and from here select the ‘Output’ either as ‘BD25’, ‘BD50’, ‘BD66’, or ‘BD100’. Under ‘Processing Mode’ choose either ‘Passthrough’ or ‘Conversion’. Passthrough mode is only available for MKV, M2TS HDR or Dolby Vision enabled video files. For other video formats use the ‘Conversion’ mode. Under ‘Video Quality’ choose the right option like ‘Same as Source’, ‘Fit to Disc’. While choosing the video quality you can also see the output video size just next to it. Click ‘OK’ to go back. 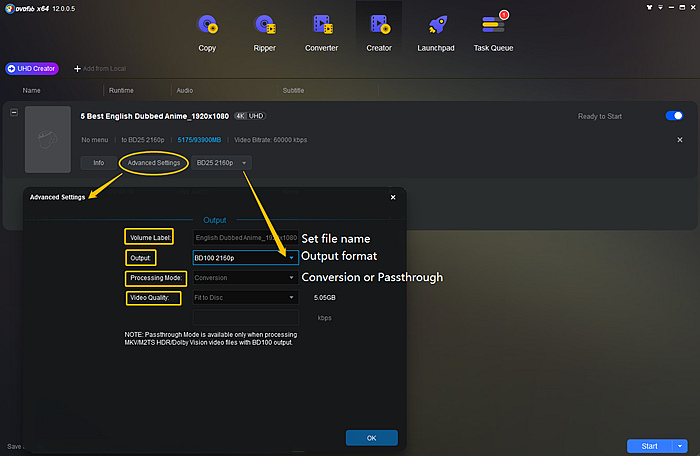 If you do have a video which supports multiple audio languages then you can choose to select a few or keep them all. You can also select subtitles and can even add subtitles from external subtitles files (.SRT, .SMI, .ASS, .SSA). See the image below. 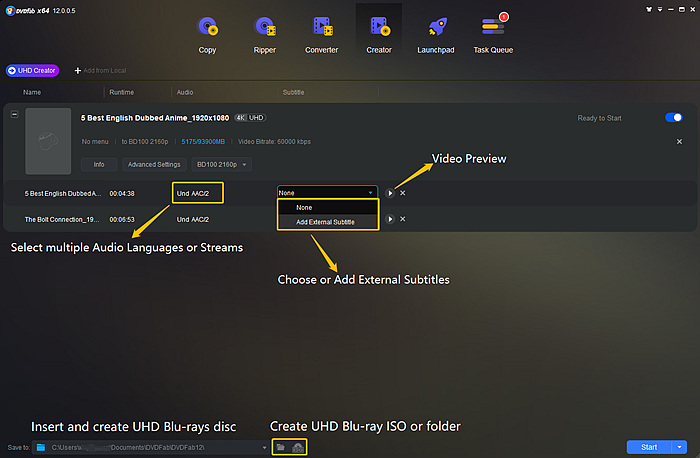 Now you are just ready to start burning your videos to 4K UHD format. For doing this you have three options. First option is to burn a blank Blu-ray disc, second option is to create an UHD ISO image, and third option is to convert and save your videos as an UHD folder. Each of these options is discussed below. 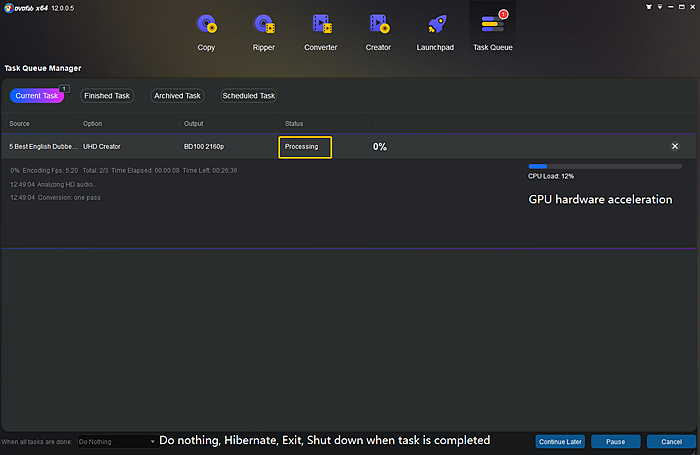 To burn a physical Blu-ray disc first get the right type of a blank Blu-ray disc. Head over to the ‘Advanced Settings’ and check which ‘Output’ you have selected. If suppose you have selected ‘BD50 2160p’ there then you’ll need a blank BD50 disc for burning. We suggest you using the output disc type wisely. Most of your projects will definitely come under BD25 only having 25GB storage capacity. So, only choose BD50 or higher Blu-ray type when your videos outsize the BD25 storage capacity.

Now after getting the right type of the Blu-ray disc, click the ‘Save to’ location field in DVDFab 11 and select your Blu-ray burner optical drive. Hit the ‘Start’ button and insert the blank Blu-ray disc when prompted. Wait until DVDFab finishes burning the Blu-ray disc for you.

Option #2: Convert and Save The Videos As An UHD ISO

If you don’t have a Blu-ray burner optical drive ROM then you can easily convert and save your videos as an UHD ISO file. This ISO image can be burned to a physical Blu-ray disc any time. It can also be played directly on various media players and can be stored on your computer’s hard drive. Click the ‘ISO’ button and select the output location then click the ‘Start’ button to start creating the UHD ISO.

Option #3: Convert and Save The Videos As A UHD Folder

It has the same properties as that of an UHD ISO. It also serves as the soft-copy of a UHD Blu-ray. Will have the same quality as that of a UHD Blu-ray disc or ISO. Simply click the ‘Folder’ icon as shown in the image above and select the output save location then hit the ‘Start’ button for creating the UHD folder.

When the conversion process completes you can enjoy your UHD Blu-ray disc, ISO, or folder. UHD ISOs and folders can be played on most compatible devices, these devices can be a PC, UHDTVs etc. Not all devices support playing ISO or folder files directly. Once done, you can watch your converted UHD Blu-ray with the best 4K media player, DVDFab Player.

DVDFab UHD Creator is the world’s most powerful 4K UHD authoring tool. Having all the necessary features lets this software hold the number one spot. You should choose DVDFab UHD Creator because of the following reasons.

• Supports all kinds of video formats. You can merge multiple videos from different formats to create a single 4K UHD Blu-ray.

We hope these reasons are enough to convince any user who is serious about getting a reliable 4K UHD Blu-ray authoring tool. If you still have some doubts then you should use the software yourself. By the way, you can improive video quality with 4K video upscaler software before burning UHD Blu-rays. In this way, you will get 4K UHD Blu-rays of peak quality and better viewing experience.

Any software which claims to be the best among others can’t be considered the best one unless it clearly does what it claims. In this article you just have found such a software, a powerful 4K UHD authoring tool that does exactly what it claims. You can go through the entire article and test each and every feature or statement against this wonderful software. We bet all the features and statements that we made will be totally up to a user’s satisfaction level. If you are choosing DVDFab UHD Creator then we can assure you that you are making the right choice.

This is the only versatile UHD Creator software that is highly user-friendly, user-customizable, reliable, fast, powerful, and trustworthy. No other 4K UHD Creator can understand a user’s needs better than DVDFab UHD Creator and you can confirm this by going through this article again. So, you just spent enough time in reading and it’s time for some action now. Go ahead, download, install DVDFab UHD Creator, convert your favorite videos in to a 4K UHD Blu-ray and enjoy the full theater-like experience on your 4K UHD Player at your home with true digital surround sound and HDR quality.