As we know, 4K UHD is an ultra-high definition resolution format which is four times the resolution of Full HD. Videos shot in 4K UHD format have plenty of advanced features that are sometimes comparable to the normal human vision. If you are watching a 4K UHD video, then it simply means that you’ll be enjoying it in the best ever quality with life-like visuals.

But 4K videos can’t be easily played on a Mac or a Windows computer. Because their built-in players don’t have 4K support. Even if you use some free 4K players, then you’ll find that they lack performance or don’t work smoothly. Thus, the only option is to find a compatible 4K UHD player that you can use to play your favorite 4K UHD Blu-rays and videos on PC and TV. Here in this article we introduce DVDFab Player 6 which is the world’s best 4K UHD media player.

Before diving deep in this article, you should download and install DVDFab Player 6. Because this will have several benefits as while reading the article you can always test the features, functions, and options of this 4K UHD player as we tell you. Installation will prevent all types of doubts and confusion related to software usage. After all, DVDFab Player 6 is available for both Mac and Windows operating systems. You can find the download links below.

Part 2: How to Play 4K UHD Blu-rays And UHD Videos On PC and TV

DVDFab Player 6, as the world’s first and the best 4K UHD player available, not only works on PCs, but works on 4K HDTVs with HDMI connection. However, not being a hardware player, it still has powerful support for HDR enabled UHD videos. In a nutshell, DVDFab Player 6 works in two modes: ‘PC Mode’ and ‘TV Mode’. Playing 4K UHD requires a powerful computer hardware because the high definition detail needs to be properly decoded, and HDR data requires proper processing, which can merely be done by a powerful computer rig. Hence, we suggest you prepare at least Nvidia GeForce GTX series cards if you want to enjoy the best and smooth 4K entertainment.

This mode is suitable for watching 4K UHD Blu-rays and UHD movies on PC (Mac or Windows) with recommended hardware. You should have a 4K monitor for enjoying UHD videos with HDR and full 4K resolution. Note that DVDFab Player 6 also supports 4K UHD Blu-ray, not only in disc format, but in ISO image files and folders. Here, Blu-ray ISOs and folders can be regarded as the soft copies of the original 4K UHD Blu-ray discs. 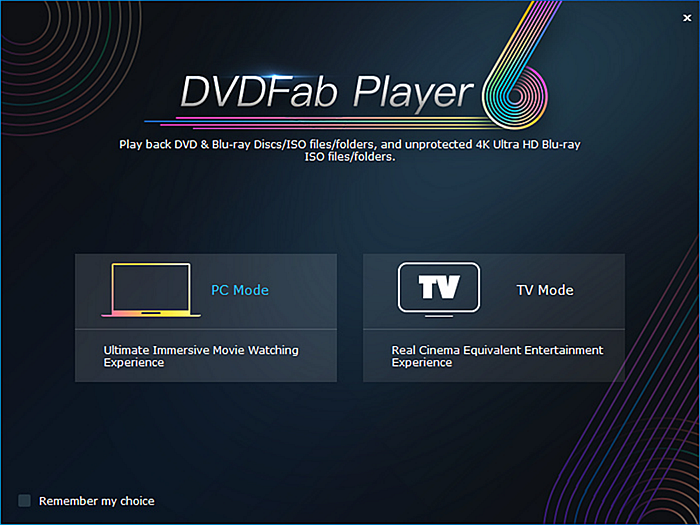 On the left sides appears the navigation panel, where ‘Library’ and ‘My Computer’ are offered to load your 4K UHD Blu-ray disc, ISOs or folders. For disc, just press the ‘Discs’ button to load disc content on condition that your PC is equipped with the feature to identify 4K disc. For ISOs and folders, just hit ‘File Explorer’ to locate the 4K UHD videos. If your PC contains 4k Movies, just load the movies to the local media library for later playback. Once your PC files synchronize with the 4K IHD player, you can see movies, videos or TV Shows on the right display window. 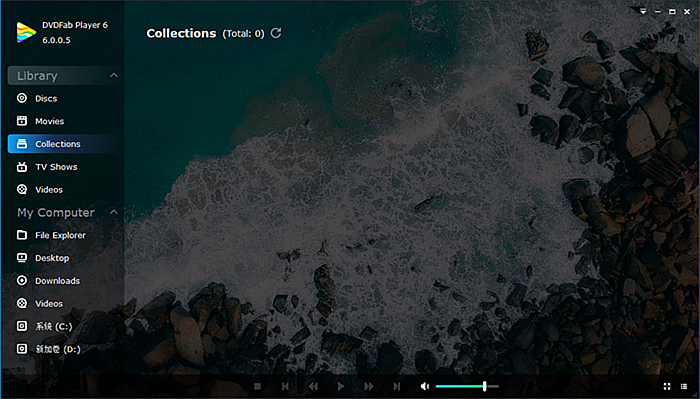 Before video playback, you have access to customizing the video in terms of video, audio, subtitles and playback, or finish this task while you are enjoying it. Tab the reverse triangle icon in the upper right corner of the main interface, choose ‘Settings’ to personalize related features. Alternatively, simply press ‘F5’ to achieve the same aim. You can set video subtitles as hoped. Note that if the video to be played contains external subtitles with SRT format (full name SubRip text, widely used and broadly compatible subtitle text file format), DVDFab Player 6 allows you to customize the size, position, style (bold or italic) and color of the external subtitles when necessary. 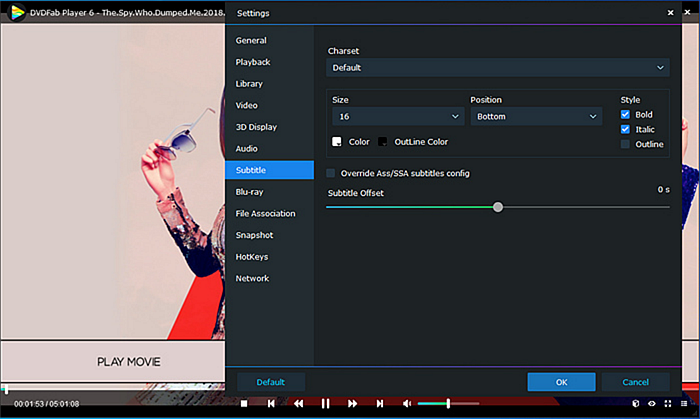 What worth mentioning is that this new 4K UHD player is furnished with hot keys for PC mode and TV mode, paving way for smooth and quality playback. Just see ‘Hot Keys’ in the settings panel.

TV Mode is applicable to watching 4K UHD Blu-ray discs or UHD movies if you have a 4K HDTV. This mode is specially designed for large screen HDR-enabled 4K UHD TVs, in which case DVDFab Player 6 works pretty similar to a media center. Special Instruction: You’ll need to connect your 4K UHD TV to PC via HDMI cable and configure the best display settings for TV screen on your PC. Besides, the settings for graphics cards shall be ensured respectively when it comes to building connections between TV and PC. Otherwise, a window will pop up ‘Your computer hardware  configuration does not support hardware decoding for 4K UHD Blu-rays’ when you load 4K media contents. 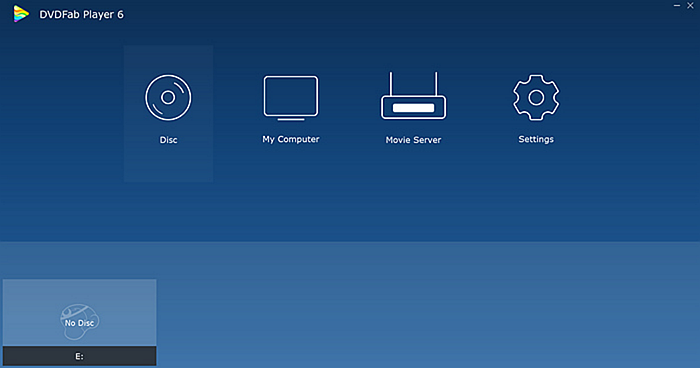 Launch the 4K UHD player and click ‘TV Mode’ on the first screen, which will open the player as a full screen media center that appears on TV screen too. On the main interface you will have the options like ‘Disc’, ‘My Computer’, ‘Movie Server’ and ‘Settings’. Tab the ‘Disc’ and load your UHD Blu-ray disc or click ‘My Computer’ to load UHD ISOs/folders, movies or videos from HDD, PC desktop or optical drive. In this way, you can play 4K UHD videos with high quality.

This is a media center styled UHD player, that’s why you won’t see even basic player controls on the TV screen. To compensate this, you have to master the usage of hotkeys which can be found in ‘PC Mode>Settings>Hotkeys’. However, this ‘TV Mode’ player does provide some on-screen controls that can be accessed by right-clicking in the left most part of the screen. Check if you need to customize these settings or not. Remember if you are using Player 6 on Windows, you can also use the remote controls for Windows Media Center to control the playback of this UHD media player. This media player highlights its menu mode for playback when deals with DVDs, Blu-rays, especially 4K UHD Blu-rays. 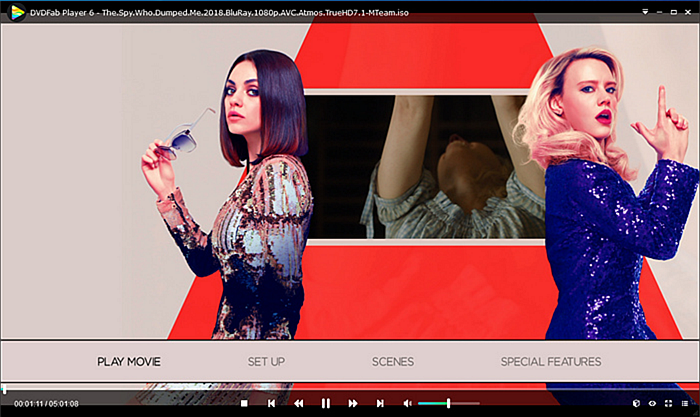 a. Organize and manage local media library with poster walls

e. Play all kinds of video formats including 4K UHD, HEVC and other media files

f. All-round 3D playback on all forms of 3D contents with stunning quality

Kindly reminder: DVDFab Player 6 allows for 30-day free trial for each user, after which period you can use it with free version where you can play all video contents except for 4K UHD media files. Considering this, if you long to experience all features of this 4K video player, feel free to subscribe to the paid version from the official site.

From the article it is clear that 4K UHD is quite an expensive devotion to ultra high definition entertainment. You’ll need 4K screens, powerful video cards, CPUs, monitor and Hi-Fi audio system to watch 4K UHD Blu-rays and UHD videos with the best possible experience. But such powerful hardware are just mere pieces of materials without DVDFab Player 6, since this it has got the power to bind all these hardware equipment in creating the best 4K UHD recreation experience for you. You’ll be astonished by its HDR function, 7.1 digital surround sound, performance and fluidity. Nevertheless, if you want to enjoy all this features, you need to pick some dollars out of your pocket. A reasonable price is waiting for you!