With batch conversion, multi-core CPUs, and NVIDIA CUDA supported on most DVDFab products (including Blu-ray Copy), the converting speed is already extremely fast. However, DVDFab still keeps moving on to develop and apply the homebrew "Lightning-Recoding" in Blu-ray Copy for even better user experience.

With Lightning-Recoding, users can copy H264 video in "Full Disc" or "Main Movie" mode of Blu-ray Copy with compression much faster than before.

The professional DVDFab test team has done loads of testing work on Avatar and other popular Blu-ray movies to learn the performance of Lightning-Recoding. And it proves to be stable and perform well.

The diagram below shows straightforwardly the performance between copying Avatar with and without DVDFab Lightning-Recoding to give you a general idea.

The Converting Speed of Avatar with and without Lightning-Recoding 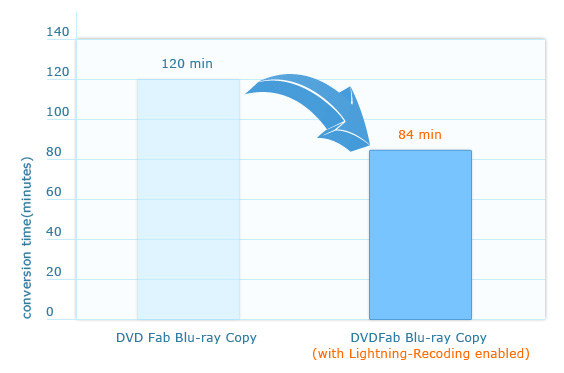 The following tables are the detailed information on comparison from a couple of Blu-ray movies in the same environment.

*Lightning-Recoding is applied in Blu-ray Copy, under "Full Disc" or "Main Movie" mode, and it will be used by more DVDFab products later;
*The source must be H264 video;
*It will be automatically and only activated when compression needed;
*Users who can't get advantage of NVIDIA CUDA technology can obtain a much faster speed from Lightning-Recoding; of course anyone who uses CUDA can also get improvement on performance from it. *About Lightning-Recoding, we've applied for patent, and now it's in patent pending status.