Best Ways to Convert MP4 to AVI Format with Ease

Summary: This article offers extended knowledge about MP4 and AVI and show you how to convert MP4 to AVI with desktop and online video converters.

The AVI format has attracted many of the MP4 users in no time and still is not ready to get back. Reason: it is just the ideal format for playing videos as well as movies on your PC, laptops, and also to publish online. Since majority of the users prefer MP4 format, sometimes we are in need of AVI format as well to watch a particular video and hence we have to convert MP4 to AVI format for the same reason. However, it’s not a child’s play to get the video in another format with same aspects. And today, we are going to discuss how to convert MP4 to AVI format. Before that, let’s have a look at what exactly are these MP4 and AVI formats and why and how are they different from each other.

Part 1. What are MP4 and AVI Formats?

AVI stands for Audio Video Interleave. Microsoft introduced this multimedia container format as a piece of its technology, Video for Windows. AVI files are capable of containing both video and audio data in one file container that further enables simultaneous “audio along with video” playback. Similar to the DVD video format, features that are hardly used including several streaming of video as well as audio are also supported by AVI files. The AVI format is mainly related with “Audio Video Interleave File”. Current files can be compressed with any one or other codecs such as DivX and XviD. Moreover, it can also be used with DVDFab Player 5, VLC Player, as well as The KMPlayer. Usually, AVI is less compressed as compared to other well-known formats such as MPEG and MOV. This means that any AVI file will be bigger than the similar file in one of these compressed formats.

MP4, also known as MPEG-4 Part 14, is developed by MPEG and is a container format that uses MPEG-4 compression. The MP4 container enables its users to store mixture of audiovisual data, still image, along with subtitles in just one single file. MP4 video format files generally can be saved with extensions .mp4, while some others include .m4p, .m4a, .3pg, as well as .m4v extensions. Some facts of MP4 are:

Both MP4 and AVI formats are media containers. They are able to store various types of video codecs. Therefore, while comparing MP4 and AVI, one should for sure compare the video audio codecs of these two formats, and just not the media container. Despite the fact that both MP4 and AVI formats are broadly used formats, we would like to highlight the fact that MP4 surely gives better quality that too in a same size; it is also more compatible comparatively. MP4 format file is compatible on various media players and more devices as compared to AVI. In addition, MP4 can easily get stream on Internet whereas AVI cannot. Consequently, MP4 can always be a good option to go with, if you had to choose one.

Now that we are done with an abstract definitions, comparison, and necessary information about both the formats, let us have a look at different ways to convert MP4 to AVI format.

The Video Converter software from DVDFab 12 is one of the most simplest and easiest ways to convert any video to whichever trendy format or device you wish. Cherry on the cake is you get a free 30-day trial, in which you can convert as many videos you wish without losing a single penny of yours. It is video converter tool that will covert any-format video to the format you want in no time and with ease. It is also used as a MP4 to AVI converter.

Follow below steps to check out how this MP4 to AVI converter can convert MP4 to AVI for you:

Step 1: Open DVDFab 12, navigate to the Converter tab and load the video you wish to convert. 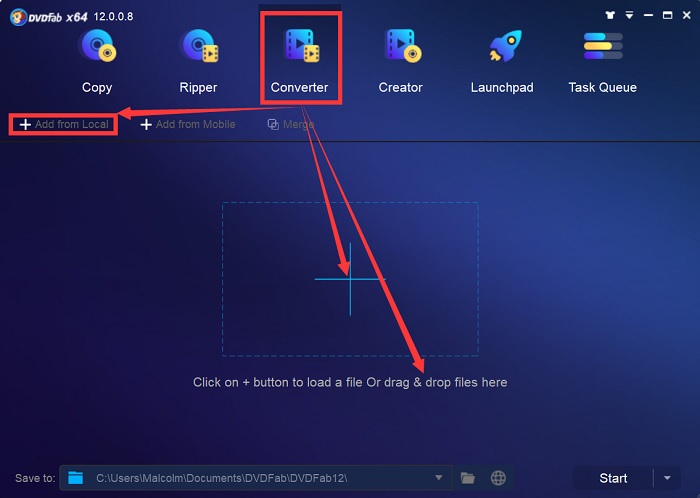 Step 2: Next, in the main interface, you will need to go to the Profile Library via the choose other profile option available at the dropdown menu of the profile selectoin box, and when you are there, navigate to Format >Video > General/Filter and select a video format, like the AVI in this case. If you want to convert a video directly to a specific device, click on Device to select a device. 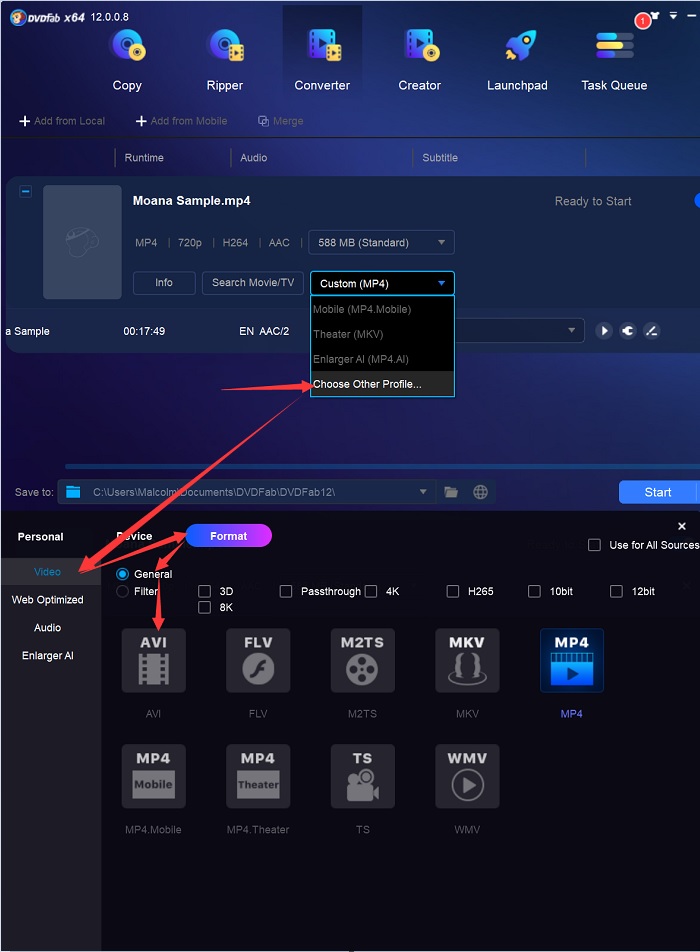 Step 3: You can also customize your video, for example, you can select the audio tracks and subtitles as per your wish, you can modify the video name, you can append external subtitles, as well as you customize your settings too. Further with Video Edit option, you can crop the video, trim the video, insert watermarks, insert subtitles, and can also modify the picture aspects such as contrast, brightness along with saturation. 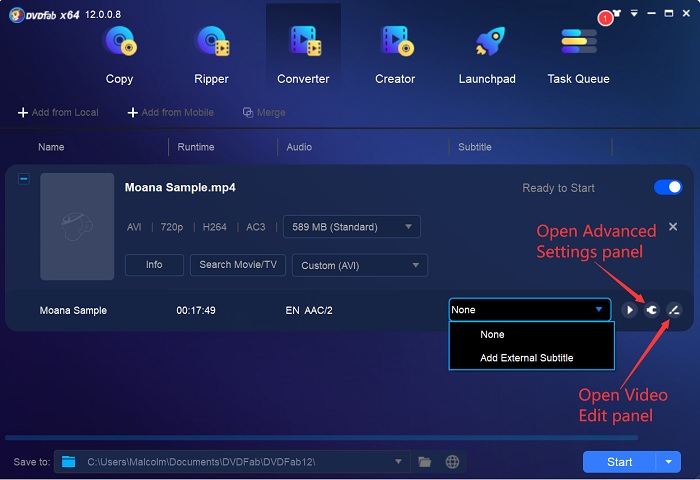 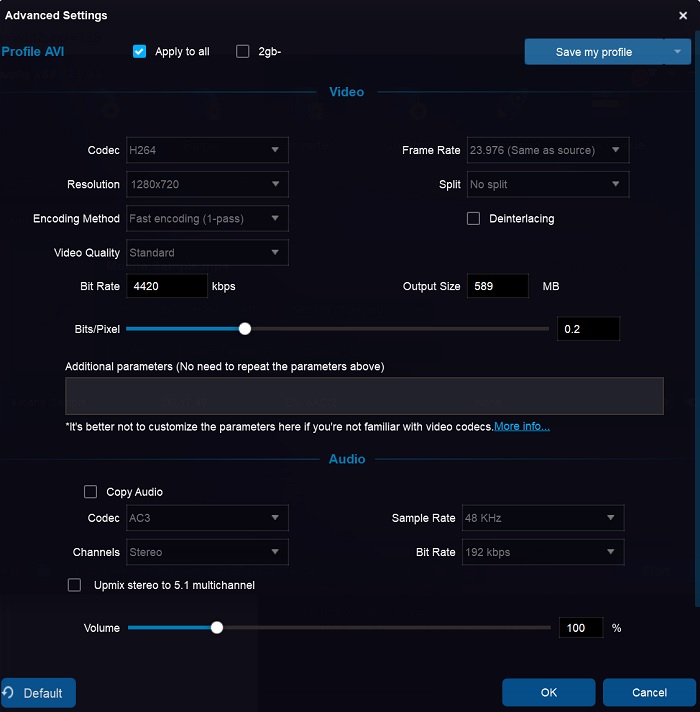 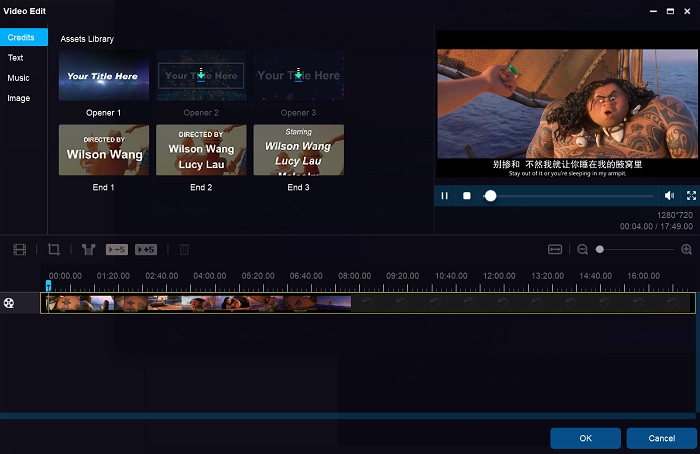 Step 4: Now simply tap on folder icon present at the bottom in order to choose a location to save your converted video. Further click on “Start” button so as to initiate the MP4 to AVI conversion process. Once the conversion is done, you see a message saying “Process completed successfully.” 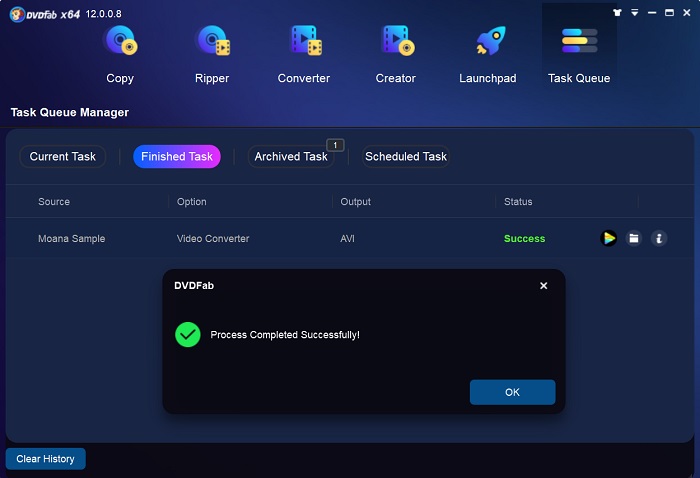 Congratulations! You have successfully converted your MP4 to AVI format with this great MP4 to AVI converter.

Step 2: Select the MP4 file you wish to convert to AVI format by clicking on Choose Files... tab in Step 1 box.

Step 3: Choose AVI as the format you wish to convert the MP4 file.

Step 4: Now enter your email address where you wish to receive the converted AVI file by Zamzar.

Step 5: Now simply tap on Convert tab in order to convert MP4 to AVI format. Once the conversion is done, your converted file will be mailed to you on the provided mail address.

Congratulations! You have done your task perfectly.