Remove the DRM encryption from the videos, songs and audiobooks purchased from Apple for unrestricted playback on non-Apple devices.

M4V vs MP4: What’s the Difference between M4V and MP4

Summary: What is an M4V file? What is MP4? Many people ask what is M4V vs MP4? This post details the difference between M4V and MP4 and how to convert M4V to MP4 from DRM-protected files from Apple Music and iTunes. Read on for more information.

• Work well in collaboration with iTunes

M4V vs MP4, do you know the truth difference? What is an M4V file? If you’re an Apple user you’re likely very familiar with files that have the M4V and MP4 extensions but have you ever wondered about the difference between the two types? Many users don’t really have to worry about that because the two are very similar and run equally well on standard media players. However, there are situations when it is important to know the difference between these extensions, which is why today we’re doing a M4V vs MP4 comparison to help you better understand the two formats.

What is an M4V file? Is M4V better than MP4? M4V is a specialized contained developed by Apple to work alongside its own products and services. Similar to other multimedia formats, M4V files can contain not only video data but also audio, subtitles, and more. All M4V files feature a form of digital rights management (DRM) known as FairPlay, which prevents them from being played on non-Apple devices（or devices without iTunes). This form of DRM can be circumvented quite easily, however, but more on that later.

What is MP4? An MP4 file is very similar to an M4V file in the sense that it’s also a multimedia container that can store multiple types of data. MP4 is an abbreviation of MPEG-4 Part 14 and is one of the most popular formats around. Unlike an M4V file, an MP4 file doesn’t feature any sort of DRM and therefore can be played on pretty much any device or media player you can think of, not just those developed by Apple.

From a technical standpoint, the M4V vs MP4 comparison mostly boils down to the codecs used. While MP4 files can hold either MPEG-4, HEVC or H.264, an M4V file always uses the H.264 codec. There’s next to no difference in quality regardless of this aspect but there can be a difference in size as files encoded with the H.264 codec tend to be a bit larger.

The main difference between MP4 and M4V most users will notice is related to the compatibility aspect. As mentioned before, MP4 files work on pretty much any type of device, including Windows PCs, Macs, iPhones, Android devices, gaming consoles, and more. Similarly, the vast majority of media players recognize MP4 files and have no issues playing them. M4V files, on the other hand, are quite a bit more limited. These files only work on Apple devices and are opened in iTunes by default, though QuickTime Player supports them as well.

If we’re talking strictly about which extension is the most popular and widely used, there’s really no comparison between the two.  MP4 has been around for a very long time and is the format of choice for a lot of users across all platforms while M4V is limited exclusively to Apple devices. That’s not to say the M4V file type is not popular in its own right but it definitely can’t hold a candle to MP4.

Part 2: How to Convert M4V to MP4 from DRM Protected iTunes Files

When speaking of converting M4V to MP4, you might think of other video converters, both desktop and online apps. In this part, we will focus on the most popular M4V to MP4 converter featured by removing DRM protection from iTunes and Apple Music files.

How do I convert M4V to MP4? Now that we took a closer look at the M4V vs MP4 comparison I think it’s pretty obvious why some users might prefer one format over the other. MP4 gives you a lot more freedom over your files and is compatible with a lot more devices and media players. But you don’t have to worry about any compatibility issues if you’re using a tool like DVDFab DRM Removal for Apple. This is the best software to convert iTunes M4V files to MP4s that you can then enjoy on any device. The tool is very fast and permanently removes Apple’s FairPlay DRM so all it takes is just one conversion and then you’re free to use your files exactly as you see fit after that. DVDFab Removal for Apple is available on both Mac and Windows. Here’s how it works:

Note: To remove DRM encryptions, users must allow DVDFab to access the iTunes Library XML. For that purpose, go to iTunes > Edit > Preferences > Advanced, and then check the box before Share iTunes Library XML with other applications.

1. Open the main DVDFab 12 client and navigate to the section labeled Utilities. There, you will find a number of very useful tools, including the one we’re going to use in this example, DRM Removal for Apple. 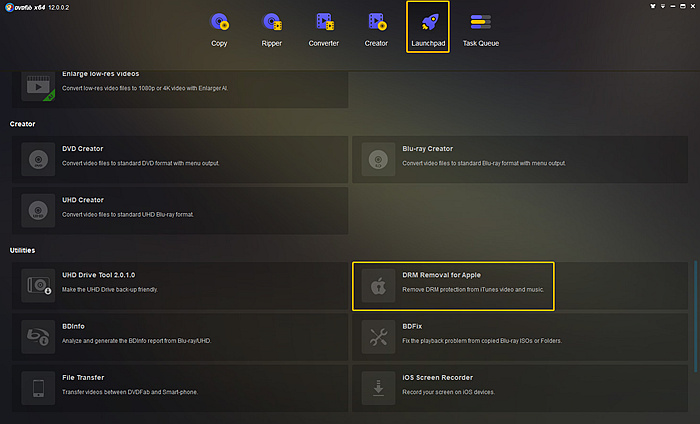 2. Once you open the tool you will be greeted by a new window where you can choose to remove Apple’s FairPlay DRM from video files or audio files. An M4V file is usually associated with videos but you can also use this tool to remove DRM from music files if needed. For now, though, you’ll want to select the For Video option and then proceed to the next step. 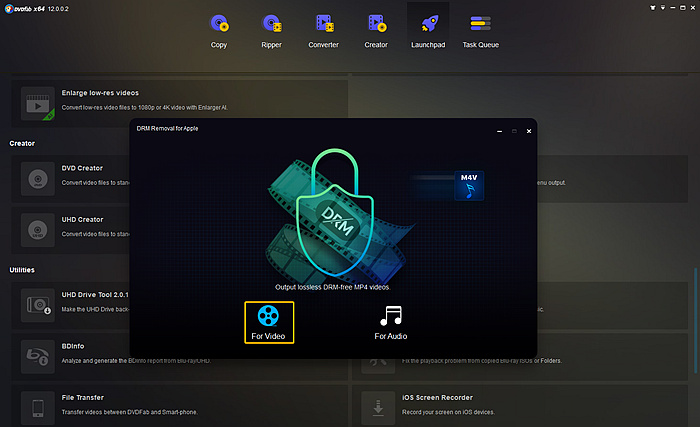 3. You can now add the M4V file or files that you want to remove the DRM from. You can add the M4V files from iTunes directly. The tool supports batch conversion so don’t hesitate to add multiple files at once if needed. 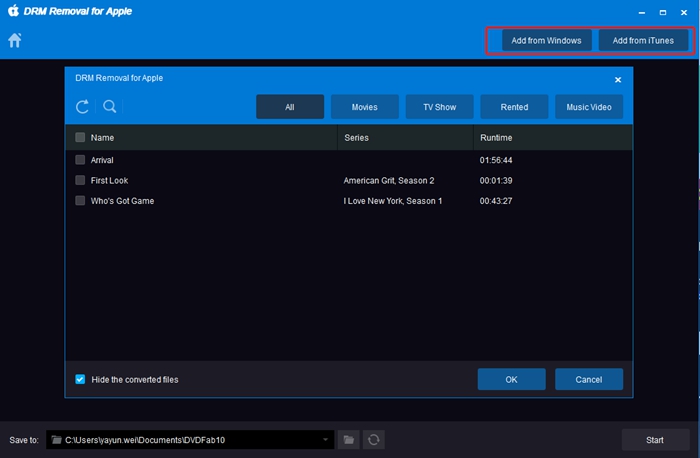 4. Once you have added all the M4V files you want to convert make sure to use the bottom dropdown menu to select a different destination folder for the output MP4, just in case you don’t like the default one. The last step is to simply click the Start button and then wait a bit until the software finishes removing the DRM and converting your files. The tool is very fast but the total wait time will vary depending on your hardware and the number/size of files you want to convert.

The above steps are on how to convert M4V to MP4 from DRM-protected iTunes files. When it comes to M4V vs MP4 and free M4V to MP4 conversion, DVDFab DRM Removal for Apple will be your top priority.

By the way, do you want to remove DRM from Netflix movies or TV shows? Do you look for a professional streaming video downloader that enables you to download streaming videos from Netflix, Amazon Prime Video, HBO, Disney Plus, and Hulu? DVDFab DRM Video Downloader comes in handy to help you avoid any streaming and download limit. For instance, you can download Netflix movies, Amazon episodes, Disney movies, and HBO series in 1080p, and 5.1 audio tracks at a 2X faster speed. Above all, you can enjoy FREE DOWNLOAD to get 3 videos for free from any streaming platforms you like. No need to worry about how to download DRM from Amazon video. During the downloading process, all DRM protection will be removed automatically.

Hopefully, this article helped shed some light on the old M4V vs MP4 debate. The main difference between MP4 and M4V you need to remember is that M4V files were developed specifically for Apple products while MP4s work on pretty much anything. M4V files tend to be a bit more limited in their use due to the way they were designed but you can bypass those limitations by using DVDFab DRM Removal for Apple to convert them to MP4 files and play them on any device you like. One more word, there might be times when you want to convert MP4 to MOV for high quality playback. DVDFab Video Converter Pro will be your good choice.

Read here, you could distinguish M4V and MP4 clearly and know how to remove the DRM of M4V files. Then would you like to play M4V files?  Click the link to know the best M4V players.

Table of Contents
•Part 1: M4V vs MP4: Main Difference between M4V and MP4
•Part 2: How to Convert M4V to MP4 from DRM Protected iTunes Files
•Conclusion