Convert video/audio files from one format to another, or from video to audio format, for playback on compatible devices.

Summary: Split MKV file right now. If you have a movie in the MKV format you may want to extract your favorite portion from it for later viewing with an MKV splitter. Here are top 7 MKV splitters for you to try out.

• Convert videos from one format to another like MKV to MP4

MKV files are becoming increasingly popular these days. Once upon a time, it was an unknown format, not playable in certain media players and not as popular as MP4 (MKV vs MP4).

But these days most modern media players support MKV and even HDTVs are offering direct MKV playback without the need for conversion.

If you have an MKV movie and want to extract your favorite portion from it for later viewing, split MKV with such 7 MKV splitters I've prepared for you.

Basically, this MKV splitter converts one popular video or audio format to another mainstream format.

And it has a built-in video editor enabling you to split MKV files as much as posssible.

So how do you get started to split MKV file with DVDFab Video Converter?

Before we get started, let it be known that DVDFab is available for a free trial of 30 days to allow you to see for yourself how well it works for your needs.

Once you've downloaded and installed this MKV spliter Mac/Windows, head to the "Converter" menu.

Once there, ensure that the output format is MKV.  It's important to note that you're not converting the file, but split MKV. If you do have a need to convert MKV to MP4, click the "Profile Switcher"(step 2 in the image) and choose "MP4".

Once you’ve imported MKV file into DVDFab Video Converter, set an output directory using the three options provided at the bottom, including "Mobile Device", "Folder" and "YouTube, Vimeo, Facebook".Then after you split MKV file, it willbe easy to find your MKV video.

There are three icons on the main interface of this MKV splitter. Let's check their functions one by one.

• First is the "video play icon". Clicking on this allows you to preview your imported MKV clip to make sure you’ve the right video imported.

• Next, you can choose the "Advanced Settings" icon. Clicking on this allows you to set the codec, resolution, video quality, bit rate, frame rate and even the audio sample rate, among others.

• Finally, it's the video editor icon. Clicking on it allows you to perform basic, but useful editing tasks, as shown in the screenshot below.

Adjust video properties: Click the "Video Edit" option and you will be led to set the brightness of video, crop the video and trim the video, apart from adding text and image overlays, not to mention subtitles.

(5) How to split MKV files on Mac/Windows

• In  order to split MKV clip, hit the "Trim" button as shown in the screenshot below.

• A new window will pop up in this MKV splitter. This is where you you’ll set you start point and the end point to split your video as shown below.

• You can drag the two red handles to split MKV based on your need.

Alternatively if you know the time codes where you want the splitting to begin and end, you could use the counter panel at the bottom half of the interface.

• Just click on the spaces provided and enter your start and end time.

You'll notice that the start and end red handles would move to the positions you've set in the time code panel.

• If you’ want to split MKV files several togetherr, you have the option to merge the clips into one by checking the Merge trimmed clips at the bottom of the video editor window.

• Once you’re satisfied with your settings, you can hit OK.

You can then locate your "split MKV files" in the output folder that you’ve selected.

2. The One-click Solution to Split MKV on Windows

Another MKV splitter I want to introduce is DVDFab Toolkit which is also free for 30 days. But it is the most easy-to-use prtogram to edit MKV. Now let's learn how to split large MKV into multiple files with this free MKV spliter.

(1) Get DVDFab Toolkit launched in Windows

(3) Load one MKV file or import MKV files in batches 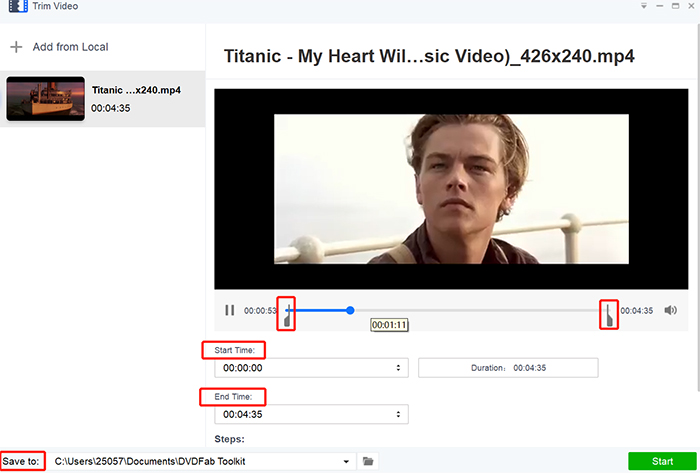 Here are some other MKV splitters available for free for you to try out.

One advantage of this MKV splitter is its ability to cut video in big file size. Useful if you've captured a whole movie with commercials.

It's a 6.3MB download which supports the input of popular file formats including MKV and works with older Windows version like Vista and XP.

After splitting MKV, you'll not have to worry about joining the cut parts as the joiner facility is provided as well.

Cutting with this MKV splitter is fast and the output video quality is lossless.

This program is not merely an MKV splitter but also a free video editor which allows you to perform the usual video editing tasks. Apart from splitting MKV, it also allows the addition of visual and audio effects. It has an easy-to-use interface.

Although offered for free, rest assured that it's ad free and your resultant video will not bear any watermark.

If you're looking for an easy-to-use MKV splitter, this program should fit the bill.

Although it's called AVI Trimmer, it handles the cutting and splitting of various file formats, including splitting MKV.

This MKV splitter is lightweight and simple to use. Video quality is maintained after splitting is done.

Another plus is there is no decoding or encoding done before video is trimmed and output.

Splitting MKV with this software is YouTube-ready.

Apart from MKV, the program supports formats like DIVX, XVID, WMV and even WEBM.

With the program you can not only make single cuts but also multiple ones.

Have an old Windows system from years back? Well, fret not the program supports Windows XP, Vista not to mention Windows 8 and Windows 10.

This program is widely used to split MKV without any quality loss. Support is offered for Windows XP to Windows 10.

Video splitting is undertaken in 3 steps. First step is to import your file and then set a time range to continue. Once that's done, you go ahead and save your video.

There's also a Mac version of this MKV splitter.

With this program you’re not only able to cut video but also audio.

It handles a host of video formats including "split MKV".

Here's how you use Media Cope as an MKV splitter.

Play the video. Then split MKV by choosing the points where you would like your video to be split - start and end points.

Before proceeding with the MKV splitting editor you may want to preview the clip you would soon be splitting.

If you're satisfied, hit the "Save button".