Summary: This article aims to give you a picture of top 8 best Blu ray Burners that can burn Blu-rays easily and quickly for home playback. Though there are numerous paid and free Blu-ray burning software on the market, it’s still worthwhile to take the best pick based by close comparison.

Bluray burner review. Do you know any best free Blu-ray burning software on the market? Though cloud storage and USB stick are prevalent these days, disc, especially Blu-ray disc, is still an excellent way for storing and sharing large data and high definition video or movie. There are so many paid and free Blu-ray burning software programs in the market for you to back up and create Blu-rays, so you may feel dizzy if you have to pick out the best Blu-ray burner software to use. Don’t worry, we have tested and found top 8 best Blu ray burning software used to burn Blu-ray easily and quickly on Windows and Mac. Now let’s take a look at these best Blu ray burners.

Full Disc: copy all the contents of Blu-ray disc, ISO file or folder in 1:1 ratio with lossless quality.
Main Movie: copy the main titles (usually with longest time duration) as ISO file or folder, or onto blank Blu-ray disc.
Clone/Burn: burn data and bootable Blu-ray disc onto a blank disc, or compress Blu-ray, say BD-50, to smaller disc size, BD-25.
Customize: customize your Blu-ray movie as the way you like, meaning you can choose the titles, chapters, audio tracks and subtitles you want, and customize your own menu.

Though so many advanced features are included, DVDFab Blu-ray Copy is easy to use. If you want to use the basic burning feature, you only need to insert the Blu-ray disc or drag & drop the Blu-ray folder/ISO file to the main interface, choose the burning mode and click the Start button. The Blu-ray burning software is a good choice both for novice and veteran users. Due to its support to the newest hardware acceleration technology, DVDFab Blu-ray surpasses many competitors in burning Blu-ray at flash speed. DVDFab Blu-ray Copy is available for both Windows and Mac systems, with 30-day free trial, virtually the best free Blu ray burning software.

How to Use DVDFab Blu ray Burning Software

As to how to use this best Blu-ray burner software, please refer to the following simple guideline. 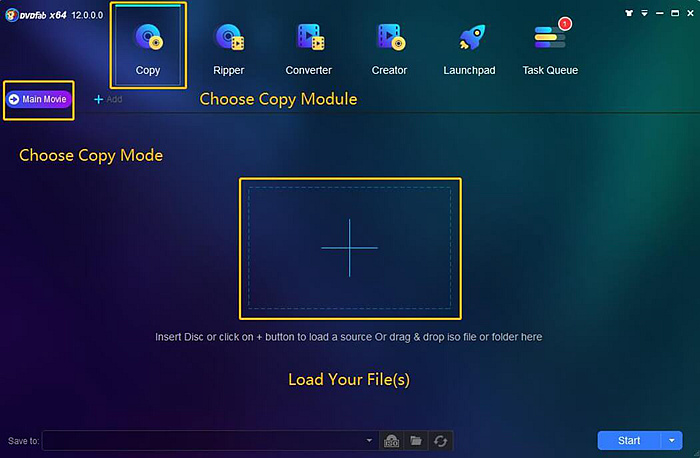 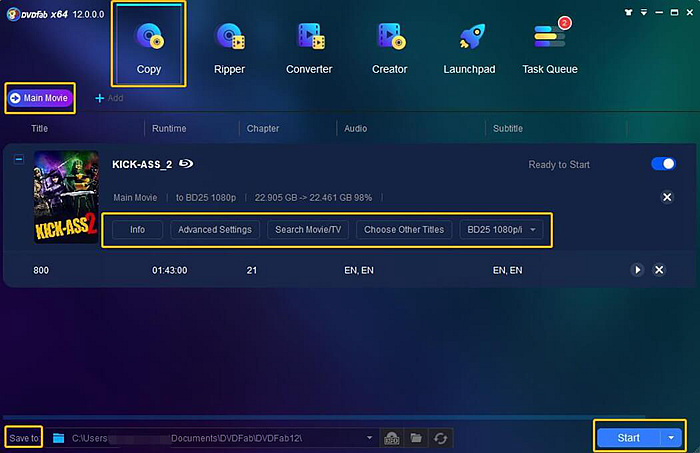 Click the Advanced Settings button to set parameters for the output Blu-ray. You can choose output size as per the Blu-ray file. Besides, tab the Choose Other Titles, you can customize output file as well. Just act according to your actual needs. 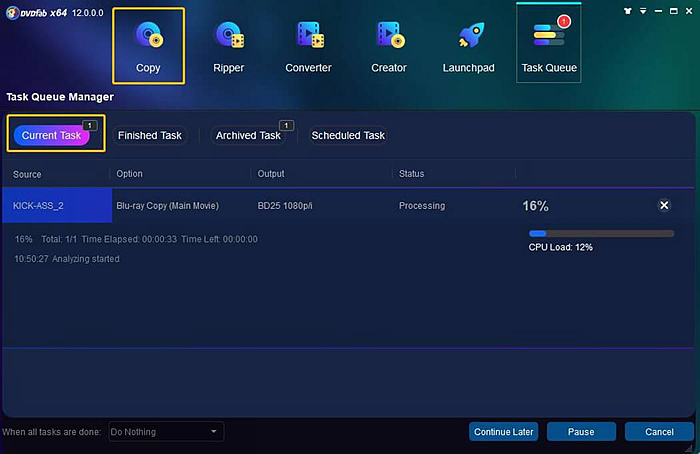 Once done, click the Start button to copy Blu-ray or burn Blu-ray to a blank disc. The whole copy or burning process will be shortened considerably since this Blu ray burning software free applies GPU Hardware acceleration technologies.

DVDFab Blu-ray Creator is another Blu-ray burning software that is used for burning various videos to blank Blu-ray disc/folder/ISO file. All kinds of video including videos downloaded from YouTube and recorded with camcorder are supported. DVDFab Blu-ray Creator is a flexible Blu-ray burner that allows you to burn and merge more than one video into one Blu-ray disc and gives you the right to arrange the playback order. This best free Blu-ray burning software, with 30-day full trial,  is also a versatile one, which enables you to customize your own Blu-ray playback menu with the built-in menu templates. You are able to set the frame, font, layout, etc. in the menu template.

All DVDFab programs are pretty easy to use, and so is DVDFab Blu-ray Creator. To start the burning process, you only need to load the video/videos you want to burn, choose the Blu-ray creator mode and click the “Start” button. 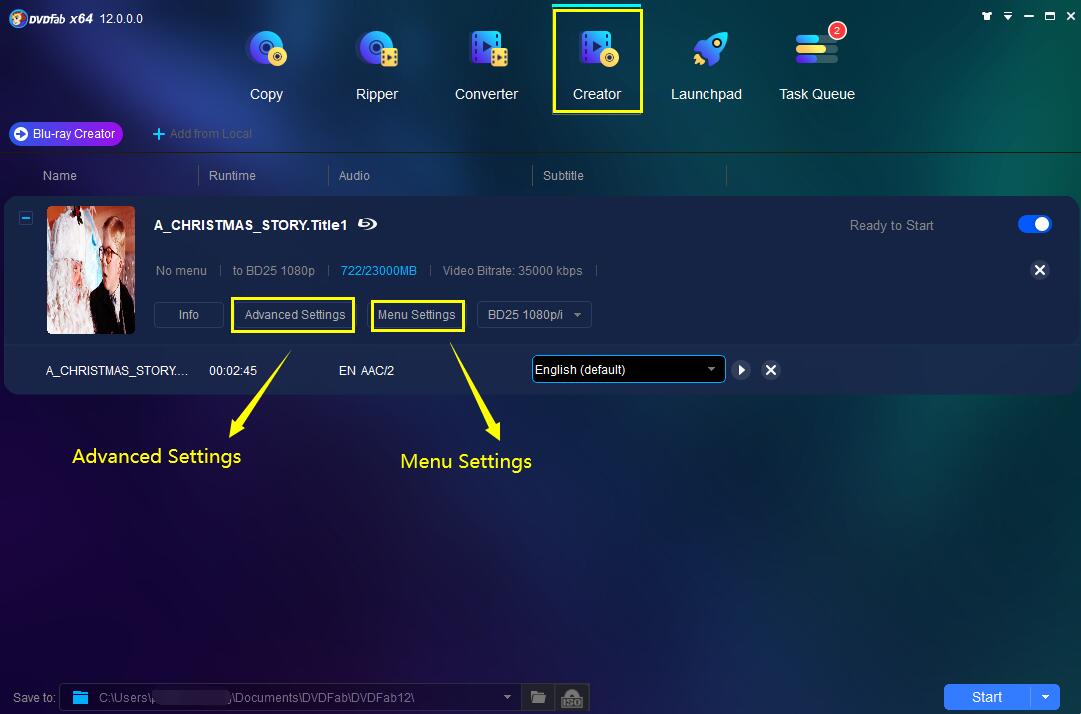 As the best Blu ray creator, DVDFab Blu-ray Creator also contains some advanced features for you to customize your own Blu-ray disc. You are able to choose the audio tracks and subtitles you want, or to add external subtitles. When adding an external subtitle track, a preview window will pop out for you to synchronize the subtitles with the video. At the bottom of the main interface, you can choose how many copies you want to burn. At the “Save to” part, you can choose to burn the video to blank disc, or Blu-ray folder/ISO file that can be stored on hard drives.

DVDFab Blu-ray Creator is a fast Blu-ray burning program which can burn video to Blu-ray with only a few minutes on Windows and Mac. Though fast in burning speed, it still can output Blu-ray with great video quality. As how to burn a Blu ray disc on Windows 10, you can try this best Blu ray burner as mentioned above. Totally a breeze beyond expectation.

Express Burn is another quick and easy-to-use Blu-ray burning software program. It can burn AVI, MPG, VOB and all DirectShow supported video formats to Blu-ray discs. Its advanced feature lies in that it allows you to create and manage chapters on Blu-ray disc. It is not as versatile as DVDFab in burning Blu-ray, but it contains the features of Audio CD recording, Video DVD authoring and Data CD/DVD/Blu-ray writing. So it’s ok to choose Express Burn if you still want to burn CD and DVD other than enjoying the basic Blu-ray burning feature. Express Burn only supports Windows system. Though it works as free Blu ray burning software, but the free version can only be used to burn normal CDs.

ImgBurn is 100% free Blu ray burning software and light weight CD/DVD/HD DVD/Blu-ray burning application. It can burn various files and image files to Blu-ray discs at ease. ImgBurn also can create playable Blu-ray discs from BDAV/BDMV folder, and that’s what makes it stand out from a lot of free Blu-ray burners. As a matter of fact, ImgBurn is a Blu-ray burner with many other advanced options. In addition to Blu-ray, it also can burn CD/DVD/HD DVD and create playable DVD. It also has the ability to create image file from files on computer or network and read a disc to an image file. ImgBurn is a powerful disc burning software but it only works on Windows system.

Leawo Blu-ray Creator is a relatively comprehensive Blu-ray burning software program that can burn and convert videos in various formats to playable Blu-ray and ISO image file. There are many menu templates in Leawo Blu-ray Creator, and you can DIY your menu according to your preferences. There is also an option for you to burn common 2D video to 3D Blu-ray. The built-in video editor in Leawo Blu ray creator allows you to trim, crop or add watermark to your video. The Blu-ray burning software is available for both Windows and Mac systems, but it is not totally free Blu ray burning software.

BurnAware is a full-fledged Blu-ray burning program with a clean and beautiful interface. The interface of BurnAware is straightforward and intuitive, and all its functions and features are clearly classified into four sections, namely Data, Multimedia, Disc Images, and Utilities. You can easily find the tool you want to use. With BurnAware, you can create and burn standard/bootable Data Blu-rays and make BDMV discs that can be played on a Blu-ray player. Its copy feature is also a highlighted part which enables you to copy disc to ISO image and copy Blu-ray disc to disc. CD and DVD are supported by this Windows disc burner. Want to know how to burn a Blu ray disc on Windows 10? Go to its product page.

Ashampoo is a handy Windows Blu-ray burning program. It can create Data Blu-ray discs and Blu-ray discs with autostart capability. It also has the ability to create Video Blu-ray from prepared folder and get disc images from Blu-ray discs. It includes an advanced function for you to create modified copies of Blu-ray discs. Ashampoo Burning Studio provides a step-by-step instruction when you make a Blu-ray burning, but it lacks some customization options for you to customize your Blu-ray. It also can be used to burn CD and DVD. However, this burner is not free Blu ray burning software. If you want to know how to burn a Blu ray disc on Windows 10, resort to the step-by-step guideline on its official website.

Don’t be fooled by the CD in its name, CDBurnerXP in fact is a free Blu ray burning software program for disc lovers. All kinds of CDs/DVDs/Blu-rays are supported by this burning tool. With CDBurnerXP, you can burn any data to Blu-ray discs and make a copy of a Data Blu-ray. The burning software also allows you to burn ISO files to discs, create ISO images from discs. The major functions of this Windows burner are all presented in its main interface, so novice users can find the right tool easily, or they can go to its official website to find the detailed burning steps.

Now the features and functions of top 8 best Blu-ray burners have been listed above, so do you have any idea which one you shall choose? If you are still undecided, my advice is to try each or several of them yourself. DVDFab Blu-ray Copy and Blu-ray Creator should be on the top of your try list as the best free Blu-ray burning software, because they are powerful enough and provide a 30-day free trial. So act now!

By the way, if you aim to upscale video while ripping Blu-ray to videos that can be played on various devices, DVDFab Enlarger AI will help you achieve this aim. It will work seamlessly with Blu-ray Ripper module to rip Blu-ray to 4K videos with better image quality.