Summary: Is MPEG4 same with MP4? Here in this article, we will show the differences of MPEG4 and MP4, and present you how to convert MPEG4 to MP4 or convert MP4 to MPEG4.

At first glance, MPEG4 and MP4 may seem the same thing. That’s understandable as many are under the impression that MP4 is just a short form for MPEG4.

As you'll learn below, technically they are different in terms of meaning and their uses.

The Extended Knowledge of MPEG4 and MP4

This article will clear the air between the two terms and help you quickly understand their differences.

It will answer the question: is MPEG4 the same as MP4?

Let’s start with a quick explanation of MPEG4 vs MP4.

For starters, MPEG4 is a video codec. Generally a codec is used to compress a large video file to a manageable size so that it could be played in one’s preferred and supported hardware devices and software media players.

MP4 on the other hand, is a container format.

A container format allows the storage of a video codec, audio codec, images and subtitles in a single file.

Here’s a detailed explanation and background information of the two terms.

As has been explained MPEG-4 is a video codec recognised by MPEG (Motion Picture Experts Group) as a standard of audio and video data compression.

MPEG4 over the years has branched out into many different parts, among which are MPEG-4 Part 2, MPEG-4 part 10 and MPEG-4 Part 14 and more.

This clearly shows that MPEG4 is not the same as MP4.

Why then is MPEG4 still called MP4? In a way, the MP4 container format stands for MPEG4. However, it only applies to MPEG4 Part 14 (MP4). It's called MP4 mainly because  MPEG-4 Part 14 has .mp4 as its file name extension.

From the above MPEG4 vs MP4 explanation you could see that MPEG4 is not the same as MP4.

To round up the discussion, Here's a little history of the evolution of MP4 and MPEG4.

MP4 was originally conceived as MPEG-4 Part 12 which had its origin in the MOV format developed as a Apple's QuickTime File format. Over the years it evolved into MPEG-4 Part 14, which is today popularly known as MP4, which is a popular format supported by most media players and in use for video streaming.

MPEG4 on the other hand became popular in the late 1990s. It should be noted that it incorporated some important features of  MPEG-1 and MPEG-2 and many other related standards.

Now that you’ve enough background information on MP4 vs MPEG4, let’s proceed to the conversion process.

How to Convert MPEG4 to MP4 or Convert MP4 to MPEG4?

If you’re looking towards a one-off MPEG4 to MP4 or MP4 to MPEG4 conversion, you could opt for free video converters.

Online video converters would be ideal if you have to convert a small MPEG4/MP4 file as most of them limit the file size you upload online.

One such free online video converter is available at Convert.Files. You could use it if you want to quickly convert a MPEG4 to MP4 or convert MP4 to MPEG4.

Online video converters works reasonably well if you have a good Internet speed, especially on the upload side..

If you need a free software program which could convert MPEG4 to MP4 or MP4 to MPEG4 even when you’re offline, you could opt for Any Video Convertor which handle the conversion of most video formats.

If you're looking for quality and fast MPEG4 to MP4/MP4 to MPEG4 conversion on a long term basis, you could try out the versatile DVDFab Video Converter.

Whether you have online videos, captured videos or recorded videos, DVDFab Video Converter could convert any popular video formats to any mainstream video or audio formats.

With this easy-to-use video converter, you could customize your output video with its advanced settings module. It also comes with a built-in video editor to quickly help you trim or crop your video.

Here are the steps to quickly convert MPEG4 to MP4/ MP4 to MPEG4 with it.

MPEG4 to MP4/MP4 to MPEG4 with DVDFab Video Converter

After you’ve done so, click on the + sign in the middle of the interface, or drag your file there. 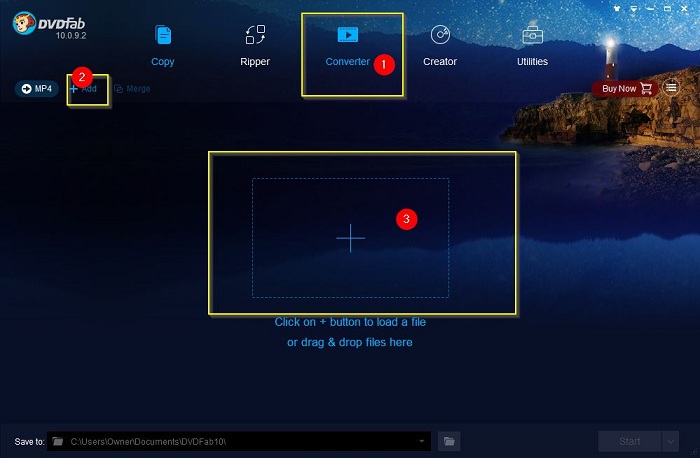 Next, proceed to choose your video output format as MP4.

Done with that, choose your output directory by clicking on the folder icon. 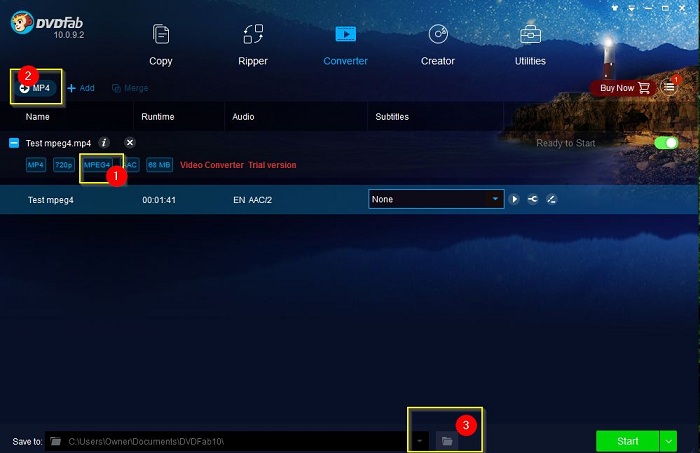 Before you proceed with the conversion, you want to preview your video to determine whether it’s the correct one you’re converting.

To do this click on the Play button to preview your video. 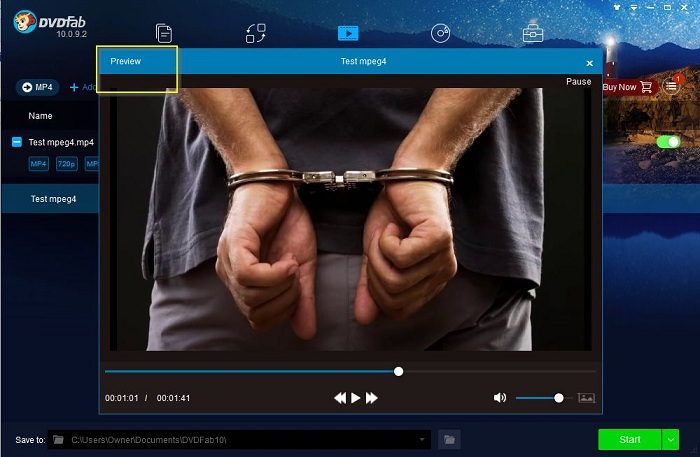 The second option available to you is the Advanced Settings.

Click on the spanner icon and you can customize the settings of your output file. On the “Advanced Settings” panel, you can choose the codec as “MPEG4”. Choose the “MPEG4”, you will get a MPEG4 encoded MP4 video. 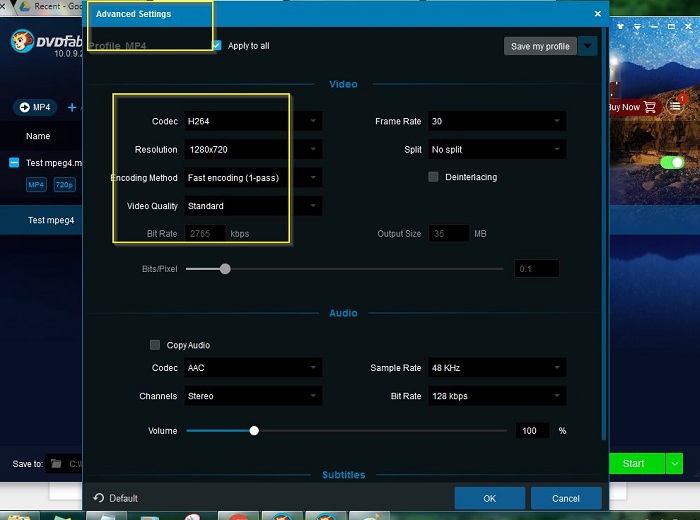 Basic functions like trimming, cropping and watermarking are available to enhance your output video. 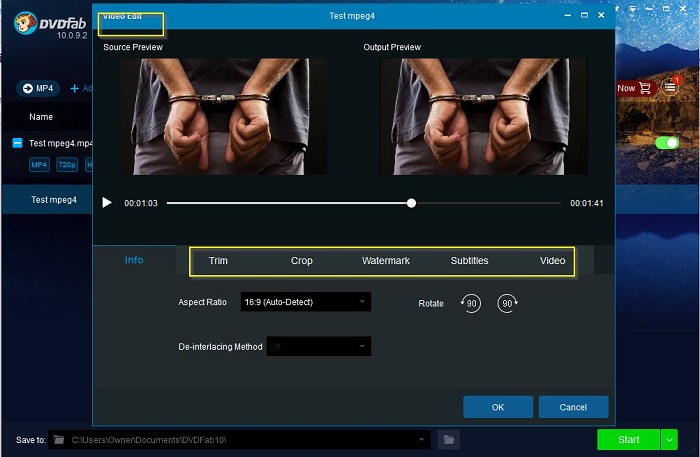 Once you’re done with the necessary adjustments, hit the green Start button to start conversion. 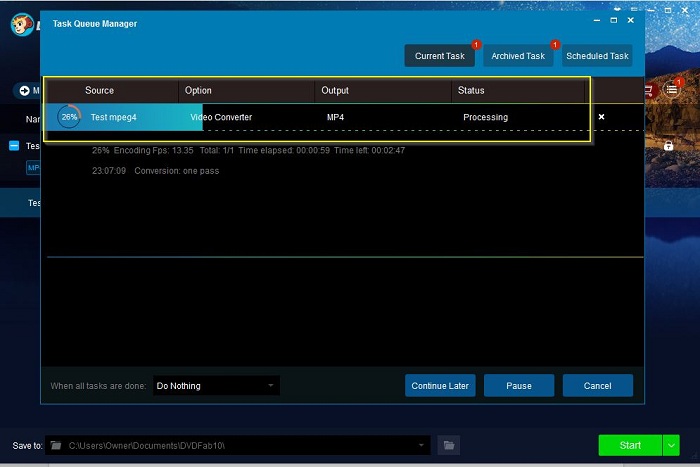 Go ahead and give it a try and you’ll not be disappointed with your MPEG4 to MP4/MP4 to MPEG4 conversion.