Convert 4K Ultra HD Blu-rays down to standard Blu-ray specifications without compromising too much on the video quality.

Can You Play 4K Movies on Blu-ray Player? [Solved!]

PART 1: Can you play 4K movies on Blu-ray player? Why?

Can you play 4K Ultra HD Blu-ray on a common Blu-ray player? How to play 4K movies? These questions have bothered many 4K UHD entertainment enthusiasts. As per the rules of downwards compatibility, you cannot directly play 4K UHD Blu-ray disc on a common Blu-ray player unless you are willing to beat about the bush via simple conversion. The reason is that normal Blu-ray players support on BD25 or BD50. Here 25 and 50 signify the size of the Blu-ray disc in GBs. Common BD players are pretty much limited to 1080p resolution, only one-fourth the quality of a 4K UHD resolution.

Warm tips: When it comes to 4K UHD backups, you need to make sure your UHD drive is friendly. Otherwise, you need to downgrade the unfriendly firmware before copying or ripping UHDs. To achieve this aim, DVDFab UHD Drive Tool comes in handy.

Simply turn to DVDFab UHD to Blu-ray converter that can downscale any 4K UHD movie to a BD25 or BD50. The downscaling will be done to HD (1080p) resolution from 4K (2160p) resolution. You can either choose to create a Blu-ray ISO or can directly burn the downscaled movie to a blank BD25 or a BD50 disc. For this purpose, you should have a Blu-ray optical drive because I have seen many people experimenting with DVD drives to play their BD discs. This won’t work no matter how many times you try. Hence, in this tutorial I will show you how to downscale a 4K UHD movie to either a BD25 or a BD50 which represents the common 1080p Blu-ray format. Now let’s figure out the questions like ‘Will a Blu-ray player play 4K?’ and 'Can you play 4K Ultra HD on Blu ray player?' The reason why DVDFab UHD to Blu-ray Converter dominates the market share in 4K UHD solution lies in that it can well convert 4K UHD to Blu-ray with premium quality and lightning-fast speed (GPU hardware acceleration technologies).

One of the most outstanding features of DVDFab UHD to Blu-ray Converter is that it excels in preserving audio and video quality during the copying or ripping process. But since we are downscaling a 4K UHD Blu-ray movies to normal BD format then there’ll be video quality difference. But the converter will process the video for the best viewing experience on a normal BD player. You’ll get equal quality that a normal BD should have, even better than a standard Blu-ray. You can choose a BD50 during conversion to get even more video quality than a BD25.

Aside from video quality, audio will also be preserved and will remain close to the original source. It will be automatically encoded to digital sound like Dolby Atmos, Dolby digital etc. with surround sound. Thus, you don’t need to worry about it. The whole process is automatic. I can just say the downscaled 4K UHD Blu-ray movie will have the best sound and video quality beyond expectation. Then how can you play 4K Ultra HD on Blu ray player? Take a look at below guideline.

PART 3: How to Use DVDFab UHD to Blu-ray Converter

Since you are familiar with DVDFab UHD to Blu-ray Converter as mentioned above, now let’s turn to its operating steps. 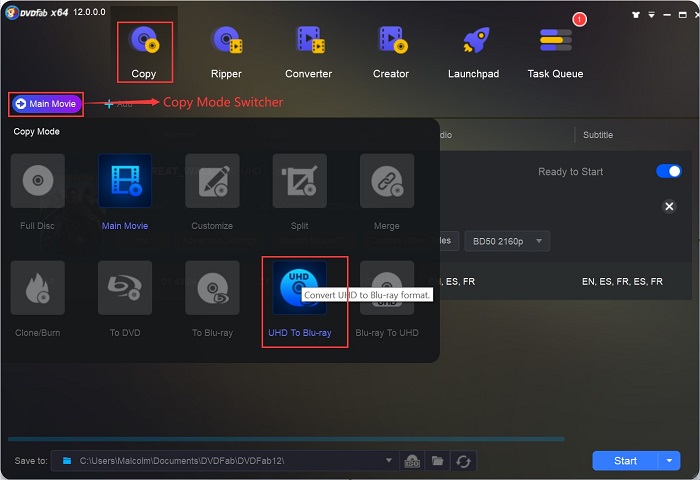 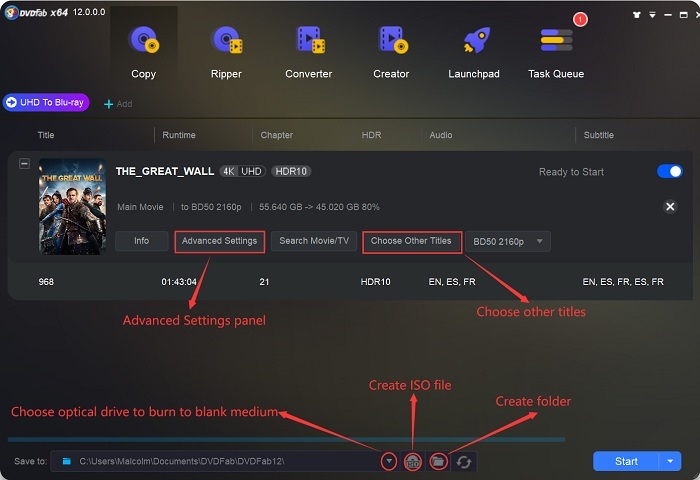 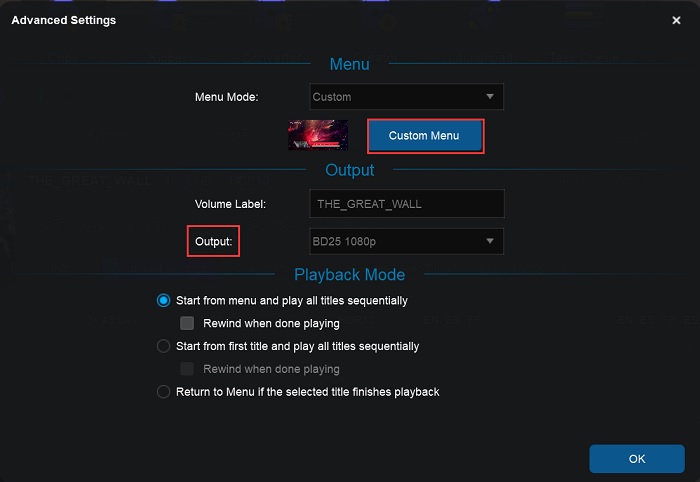 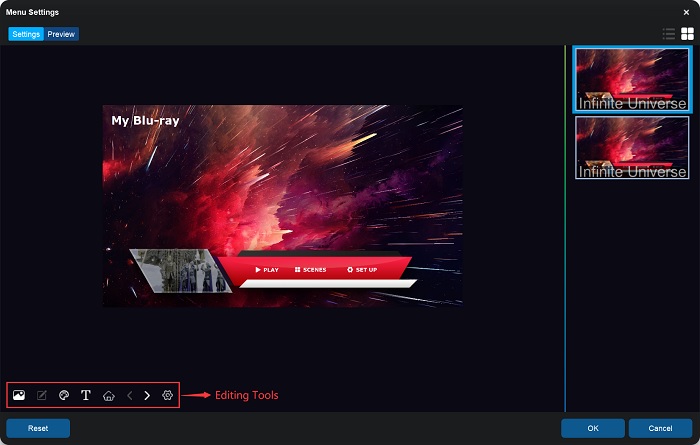 You have successfully learned to use DVDFab UHD to Blu-ray converter and now you can convert all your 4K UHD discs to common Blu-ray format.

PART 4: How to Play 4K Movies on Blu-ray Player

After converting 4K movies to Blu-ray format, it’s high time that you should watch them right now. Here come two solutions to enjoy your loved movies.

In the long run, you are advised to choose the latter since it is able to play all DVDs, Blu-rays, 4K Ultra HD Blu-rays, H.264, H.265 videos and other media files, which will ensure you quality audio-visual experience. This is how to play 4k movies as expected. You might as well have a try.

Now you might have found the answer to “Can you play 4k Ultra HD Blu-ray on a common Blu-ray player?” A sure card is to downscale your 4K UHD Blu-ray movies to Blu-ray format so that you can enjoy them on common Blu-ray players. You can either choose to burn a blank disc or create an ISO file that you can save on your computer’s hard drive and use accordingly. Creating an ISO file is a nice option because once created you can burn it on a blank disc or can share with your friends without having to re-convert it. Meanwhile, as how to play 4K movies on Blu-ray player, there are two ways out there for your option.

One more word, DVDFab Blu-ray to UHD Converter comes with a 30-day full trial without any limits. Just fee at ease to convert your wanted Blu-ray movies before the final subscription. Of course, you can rip 4K Blu ray movies to quality videos playable on mobile devices.

DVDFab UHD to Blu-ray Converter converts UHD to Blu-ray to make files playable on a device you want in the format of BD 50/25, Blu-ray folder or ISO file. It is the best free program to downscale 4K Ultra HD Blu-rays to standard Blu-rays with the least quality loss.