Samsung is a great company producing great smart phones, tablets, and to attract your attentions, phablets. What’s phablet? Usually, people refer those smart phones with a display screen between 5.0 inch and 7 inch as a phablet, meaning you can call it a phone which has a huge body as big as a tablet PC, or you can call it a tablet PC with the feature of making phone calls. Whatever how you name it, it is there, and it is driving more population into local telecommunication providers’ stores to buy it.

Samsung Galaxy Note probably was the first phablet the world has ever seen. It was introduced in October 2011. It has an impressive 5.3-inch display screen. Why they are making the screen so big? Maybe they want to talk you into watching movies on your phone, other than on your tablet. Then how to watch your own videos on Galaxy Note? With one smart video tool called Mac video converter software, you can convert all your own videos on your Mac computer to play on this massively big phone. And DVDFab offers such a software tool, Video Converter for Mac, which does that job in just three steps.

Check out the tip below if you are interested:

Converting Videos for Galaxy Note on Mac: 1 -> Download and install the latest DVDFab 9 for Mac onto your computer;

Converting Videos for Galaxy Note on Mac: 2 -> Launch DVDFab 9 for Mac, choose Converter optionfrom Option Bar at the Main Interface, then load the video you are about to convert; 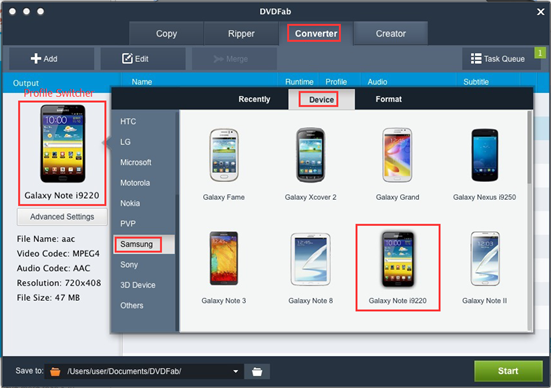 Note: selecting Galaxy Note profile from the built-in Profile Library is the key point of the whole process.

① Convert videos from one format to another for compatible devices
② Extract the audio tracks from videos and output as audio files
③ Support all the popular audio & video formats like MP3, MP4, MKV, etc.
④ Support to edit the videos like cropping, trimming, and more
⑤ Support GPU hardware acceleration to convert much faster