The Best Video Converter For Samsung Galaxy SII On Mac


With feature phones losing their advantages to smart phones, people are now forgetting that kind of phones which enable them to text short messages, make telephone calls, and play tetris. Now we’re getting used to the smart phones which have operating systems, big display screens, fanciful video games, compass, built-in map, thermometers, all kinds of apps, and internal video players and music players, etc. Wow, we are living a much colorful lives on our phones.

As far as smart phones are mentioned, the most popular two are Apple’s iPhone and Android phones. Samsung used to roll out a very good Android phone called Galaxy S II, which used to be the street phone as far as Android was brought to the table. Do you have one such phone, how can you watch your personal videos on this smart phone? Today let me introduce you a Mac video converter software offered by DVDFab, Video Converter for Mac. It has the ability to convert all your personal videos on your Mac computer to Galaxy S II videos for playing on the move.

Check out the tip below if you are interested:

Converting Videos for Galaxy S II on Mac: 1 -> Download and install the latest DVDFab 9 for Mac onto your computer;

Converting Videos for Galaxy S II on Mac: 2 -> Launch DVDFab 9 for Mac, choose Converter optionfrom Option Bar at the Main Interface, then load the video you are about to convert; 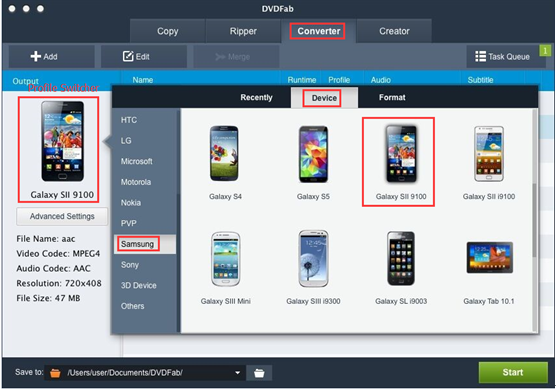 Note: selecting Galaxy S II profile from the built-in Profile Library is the key point of the whole process.

① Convert videos from one format to another for compatible devices
② Extract the audio tracks from videos and output as audio files
③ Support all the popular audio & video formats like MP3, MP4, MKV, etc.
④ Support to edit the videos like cropping, trimming, and more
⑤ Support GPU hardware acceleration to convert much faster