Home > Resources > Video > How to Edit Videos on PS4?
All Topics

How to Edit Videos on PS4?

Summary: How to edit videos on PS4 before sharing them online? PS4 has a basic video recording and editing feature that lets you record your gameplay footage and edit it before sharing it online. Now please check.

When we show our awesomeness while playing a PS4, it is quite natural to want to share the awesome moments in the form of a video. But how to edit videos on PS4 before sharing them online? Well, PS4 has a basic level of video recording and editing capability that lets you record the last 15 minutes of your gameplay footage and edit it before sharing it online. This is far from professional gameplay recording that happens nowadays but for the important short scenes, it is a good feature to help you showcase your skills to your friends and audience online. Let’s see how to edit videos on PS4 in a few steps.

Part 1: How to edit videos recorded on PS4 with the Share button

Before we start, keep in mind that it is not possible to make clips of videos or the menu interface of the PS4. 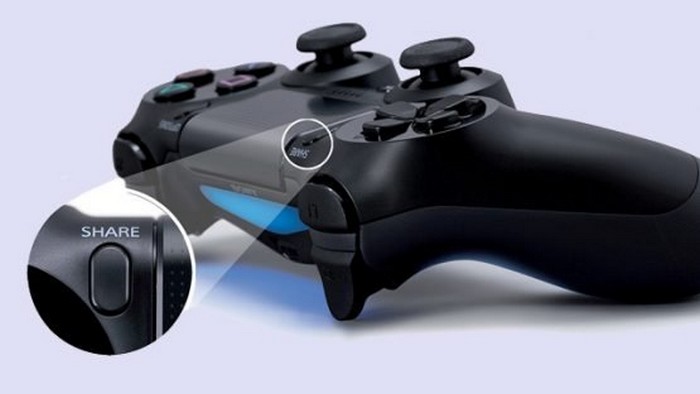 Step 2. You will see 3 options, out of them the first one should be saying “Upload Video Clip”, click on it. A new window will open named “Captures” which will have a list of captured videos if you have created videos before or just 1 if you are doing it for the very first time. Select the appropriate clip by clicking on it once to start video editing on PS4. 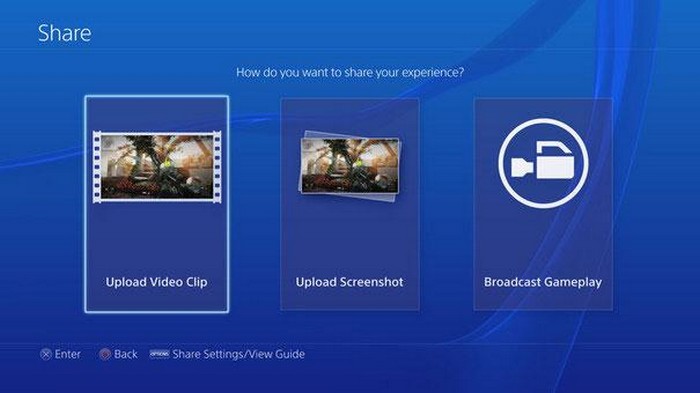 Step 3. Use the Edit window to start video editing on PS4. Note that you can only Trim your video here, there is no feature to allow you to add any effects, subtitles, codec conversion or any other advanced video editing effect. 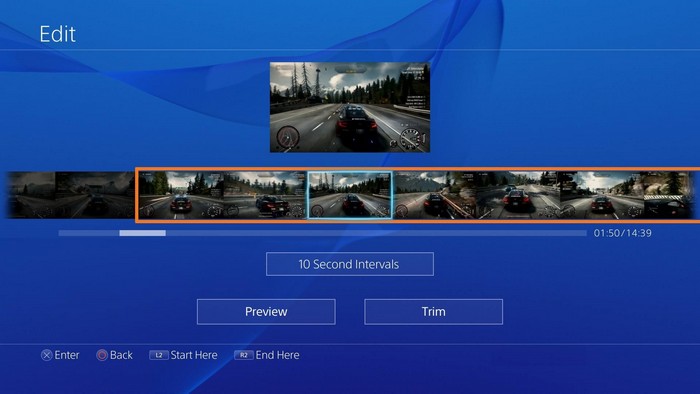 Keep scrolling through the clip by the default 10 seconds or change it to 1, 5 or 60 seconds. Find the beginning point from where you want to start the clip from and hit the L2 button. Similarly, scroll through the video to reach the endpoint and click the R2 button to mark the endpoint of the video.

Step 4. Once both the start and end points are set, use the Preview button to see if the correct parts of the gameplay are present in the video. Once confirmed, you can click on the Trim button to cut the video or change the endpoints. That’s all in the part on how to edit videos on PS4. 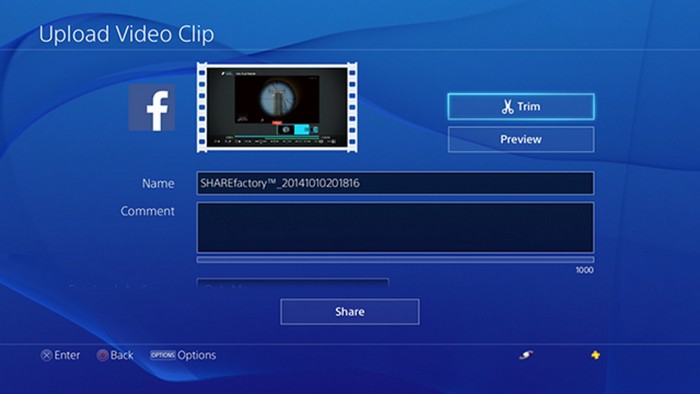 Step 5. Now you can share the edited video on Facebook. For this you might need to connect your PS4 with your Facebook account first. You can change the title of the video before sharing it otherwise by default it will have the name of the game along with a random string of characters as its title. You can also give a brief description of the clip before sharing it online.

Part 2: The best method to edit video recorded on PS4

PS4 offers us nothing in terms of video editing capabilities for gameplay clips recorded on it. If you need to do anything except removing portions of your gameplay video, you need a good video editing software like DVDFab Video Converter. It not only converts videos from one format to another, but also comes equipped with a video editor with which you can edit your PS4 video and change its properties.

Step 1. First, we need to transfer the gameplay video file from PS4 to a USB so you can do video editing on PS4 gameplay video using your Mac or Windows computer. To do so, head to the gallery in PS4, highlight the video you want to transfer and click on the Options button on your controller. Select Copy to USB Storage and then press the OK button to start the copy.

Step 2. Install DVDFab Video Converter on your PC/Mac if you haven’t already done so and attach the USB drive to this computer.

Step 3. Launch the software and add your video to the application by using the + button in the center of the screen and browsing for the file or by dragging and dropping the video on the main screen from the USB.

Step 4. Now that the video has been added, let’s launch the video editor to see how to edit PS4 videos on PC using DVDFab Video Converter. To do so, use the last icon in front of the file you have just added to the application. 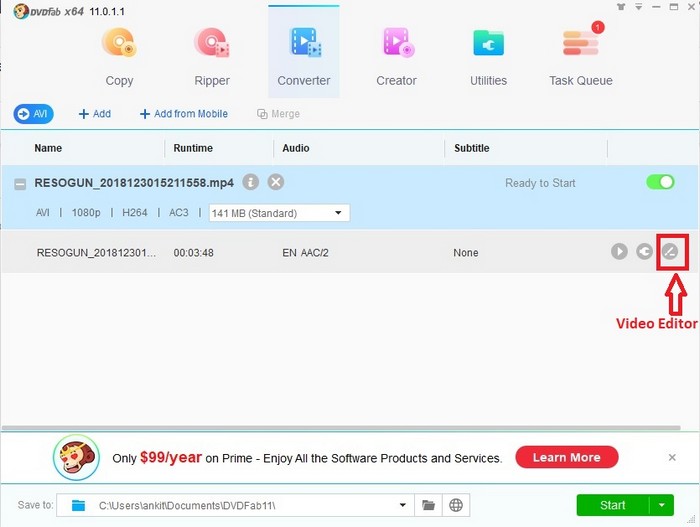 Step 5. The section below the navbar of the video contains 3 buttons - Text, Image and Subtitle. You can use the first 2 to add watermark over the video to protect from unauthorized copying and the subtitles option if have created a subtitle file like .srt to help you viewers read something in addition to hearing your game audio. 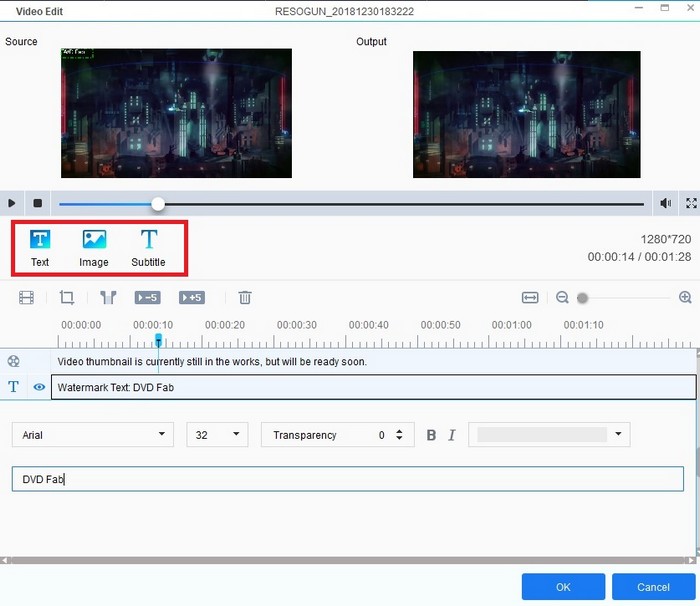 Step 6. The section below it contains other tools that will help you change the brightness, contrast and saturation level of the video. You can also rotate the video if you want from here. 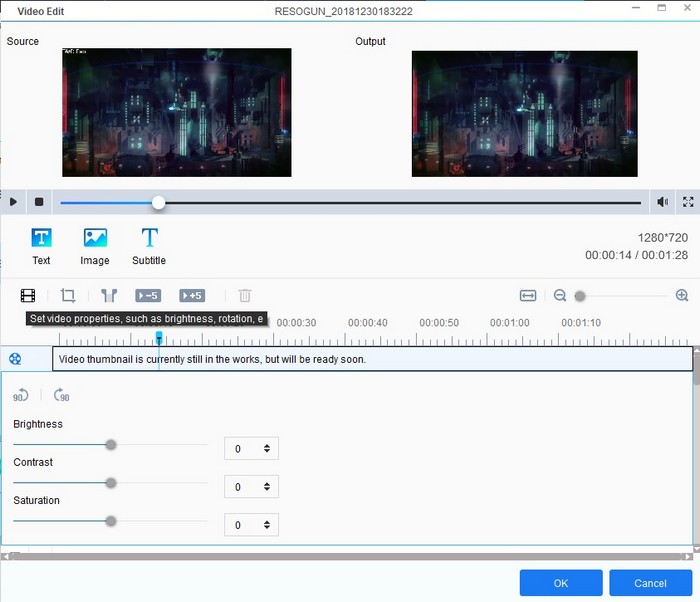 After that, there are buttons to help you Crop or Trim the video. You can Crop the video to remove some part of the video or use the Trim to remove the unwanted portions. The Trim feature can help you create 2 videos by trimming from between, merge two ends of the video after removing the middle part or the start or end part.

Step 7. The above steps are for doing visual changes to the video. DVDFab Video Editor also helps you do advanced modifications to the video. To do such changes, open the Advanced Settings windows using the second last icon in front of your video. 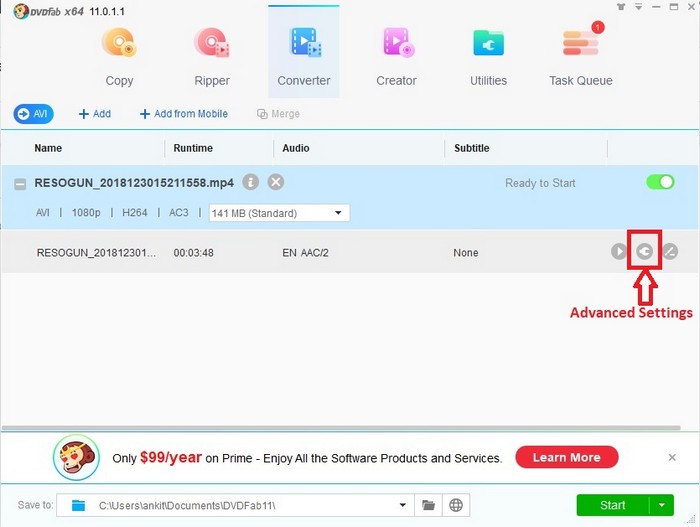 Step 8. Now you can change the Video Quality, Resolution, Encoding method, Frame Rate, Bit Rate of the audio, Audio codec and more. Click on OK once you have done the changes. 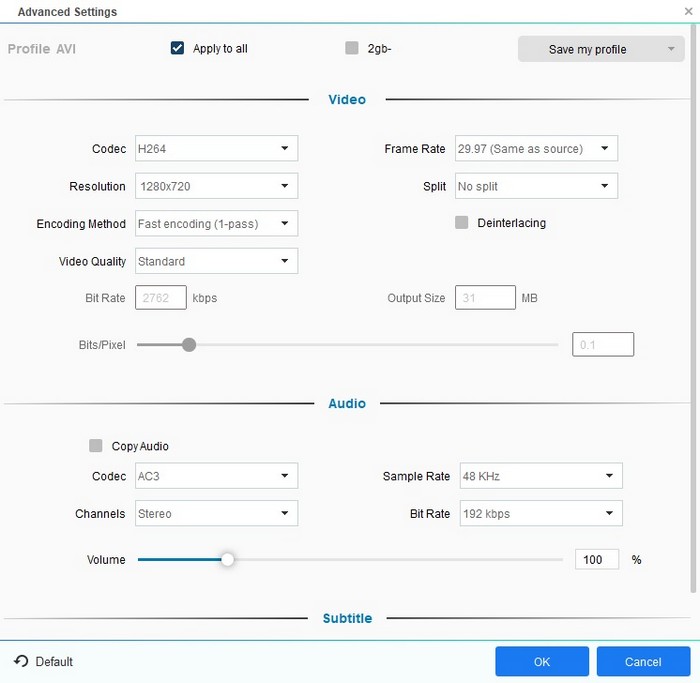 Step 9. Once your changes are finalized, click on the Start button to get another video with your changes in the output folder mentioned in the “Save to” bar at the bottom of the application. You can change the path before you start the conversion.

DVDFab Video Converter is a powerful tool that can do batch video conversions, change the format of your PS4 video from the default format to any other format and edit your video without compromising on stability or speed. You can use it as your default software to edit your PS4 videos before sharing it online.

In addition to playing games, PS4 can also be used to play DVD movies, and you can click how to play DVDs on PS4 to learn the details.