Home > Resources > Video > How to Play MKV Files on Android Devices?
All Topics

How to Play MKV Files on Android Devices?

Summary: How to play MKV files on Android devices? You can either convert MKV to Android supported formats or take advantage of a third party Android MKV player. Now read on for the details.

Playing files of pretty much any format on Windows is not a big deal as nowadays the operating system comes by default with most of the codecs you’ll need. If you’re trying to play videos on Android, however, you might be out of luck because the mobile OS still struggles with certain file types, including MKV. The good news is that there are two ways that allow you to reliably play MKV on Android and we’re going to talk about both of them in this article.

In order to play MKVs on an Android phone you could try first converting your files to a compatible format. Although a lot of files can’t be played by default on Android, the operating system does support some common formats, such as MP4 for example. As it happens, you can easily convert MKV files to MP4 or any other format using DVDFab Video Converter. The tool supports all the most popular formats and offers plenty of great editing tools that you can use to customize your videos before converting them. Moreover, the new DVDFab 11 client even lets you import files directly from your mobile device and then export them back just as easily once the conversion is complete. Here’s a quick guide on how DVDFab Video Converter can help you play MKVs on Android.

1. Open DVDFab 11 and access the Converter module from the top menu. Load the files you want to convert by using the Add button or the new Add from Mobile feature. Alternatively, you can also use the good old drag & drop method. 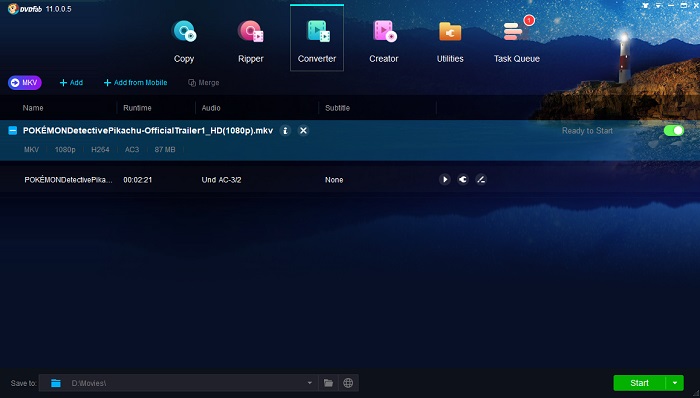 2. Go to the Profile Switcher and select the format you wish to convert to. As mentioned, MP4 is always a good option but there are a few other formats that might be natively supported by your Android device. If you’re not sure which format to choose, click the Device tab right next to Format and pick the brand and model of your device. The software will then make sure to convert to an appropriate format that will let you play the MKV on your Android device. 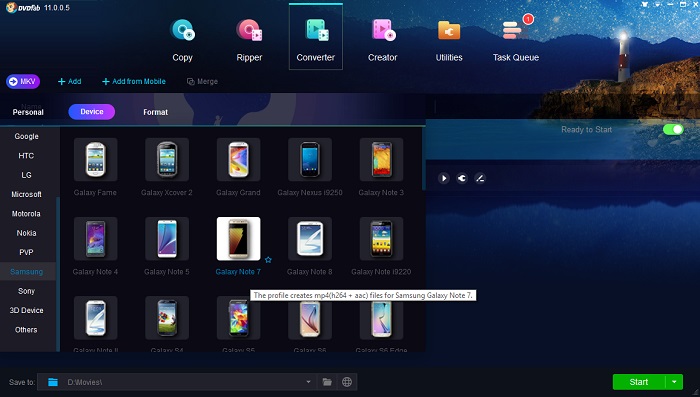 3. This step is optional but you can take a few moments to customize your file by accessing the Advanced Settings menu. Here, you can choose the video and audio quality of the video, the resolution, frame rate, encoding method, and more. Further customization can be done via the Video Edit menu, which is located right next to the Advanced Settings button. This particular menu lets you crop and trim the file, adjust certain video proprieties, and even add your own subtitles and watermarks. 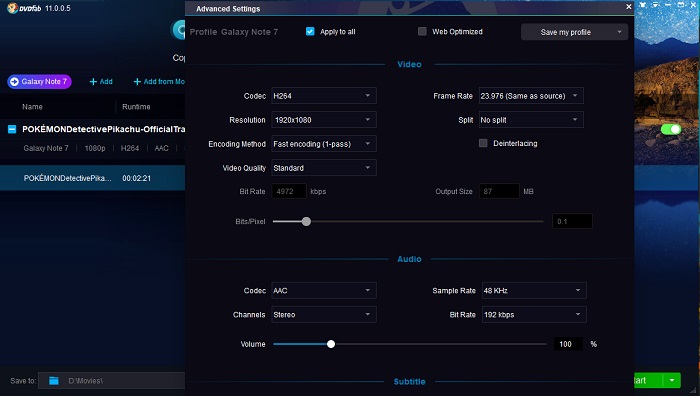 4. Use the bottom menu to pick a suitable location for the output file. Since you want to play your MKV on Android, it’s a good idea to select the option that exports the file directly to your mobile device. However, you can also just save it locally and transfer it later or even choose the new social option that lets you immediately upload the output file to YouTube. Regardless of which option you choose, click the Start button and then wait until the software finishes processing your file. 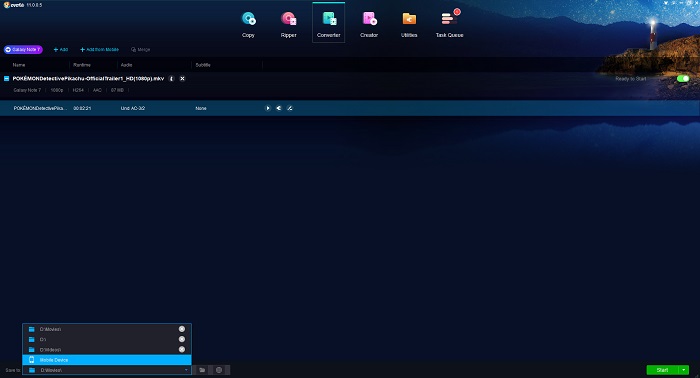 VLC is a popular app that is guaranteed to play MKVs on any Android phone or tablet. The player has been a popular choice for Windows users for ages and had similar success when it was released on all the other platforms, including Android. VLC is a free and open source map that supports pretty much every format you can think of and offers a variety of other useful features to boot. If you’re already using VLC on Windows, the Android version should feel very familiar as it features a similar interface. 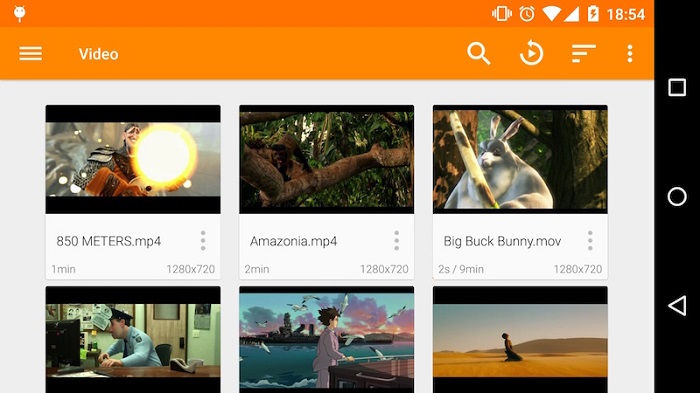 Another long-time favorite of Windows users, BS Player is a solid app that can handle almost any format you throw at it. Not only can you play MKVs on Android with this app, but you can do so in style as BS Player has great gesture support. Another great feature of this player as that it’s very lightweight and only eats up a small portion of your battery, making it a great choice for watching long movies or binge watching a TV series. 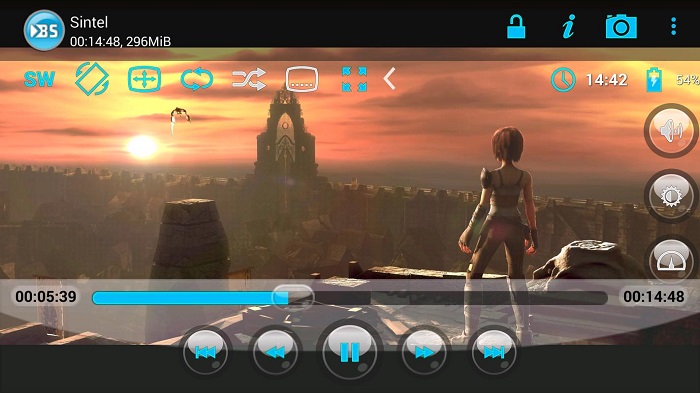 Speaking of popular Android apps, we definitely couldn’t leave MX Player out of this list. The app reigns supreme in terms of downloads from Google Play and can support just as many formats as all the other players on this list, if not more. Needless to say, you won’t have any trouble trying to play MKVs on your Android phone with MX Player. 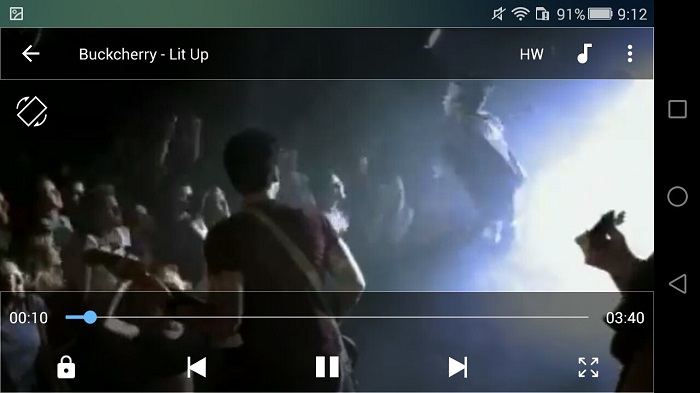 Yes, there is indeed an Android app known simply as Video Player. The app doesn’t try to do anything particularly innovative but it does have all the standard features and format support of any other good media player. Despite its name, Video Player might actually be better for music thanks to its many audio-focused features. That said, you can definitely play MKVs on your Android with this bad boy without any issues. 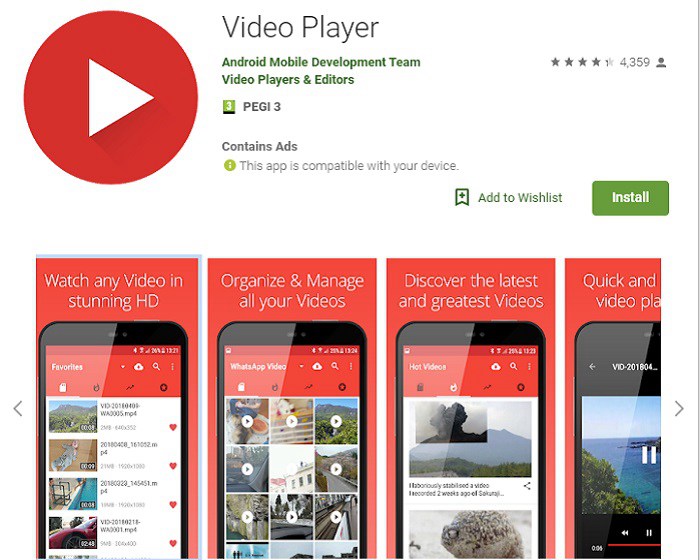 Also known as XPlayer, Video Player All Format does exactly what you would expect and is fully capable of playing almost any type of format, MKV included. But if you are having trouble with some of the more advanced formats, it’s worth noting that the app also has an HD version that specializes in 4K and UHD video files. 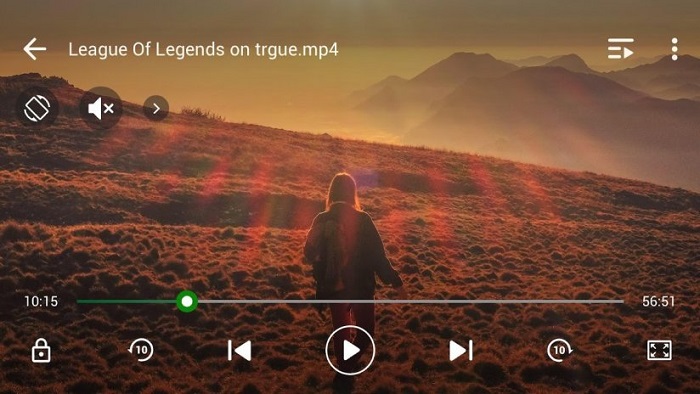 After reading this article you should be able to play MKV on Android without any problems. If you have data to spare, you can pick up one of the many free Android apps like VLC or MX Player and never have to worry about compatibility issues again. But if you would rather save that precious data, you can simply convert all your MKV files to an Android supported format using DVDFab MKV to Android converter while also customizing them in the process. Thanks to the tool’s new mobile-oriented features, it’s now easier than ever to import and convert files with this ever-evolving piece of software.