Summary: DVDFab Video Converter is a versatile video converter tool that allows you to convert any videos to various video formats. Now with the release of DVDFab 11, the Video Converter comes with many new features you may like.

Tools that can be used to convert between various types of formats are no longer a novelty nowadays. In fact, it’s quite easy to find software that can perform simple file conversion at a reasonable speed. What’s not easy, though, is finding software that supports countless different formats while also offering other useful features to boot. Not easy, but not impossible either because we actually do know of such a tool. The software in question is called DVDFab Video Converter and is an important part of the DVDFab 11 software suite, an all-in-one DVD/Blu-ray/Video solution package. If you want to learn more about it you’re in luck because our DVDFab 11 Video Converter review will tell you everything you need to know about this great tool.

As mentioned, the video converting software is part of DVDFab 11 so our first order of business is installing the main client. Luckily, that’s a very easy process that only involves visiting the official DVDFab website and downloading the software directly from the main page. DVDFab 11 is available on both Windows and Mac and there are two different versions on Microsoft’s operating system, namely 32-bit and 64-bit. Some tools are only available on certain versions of the client but the Video Converter works on all of them so don’t worry about choosing the wrong client.

As far as the system requirements are concerned, both Windows and Mac users need at least 10 GB of free space, 2 GB of RAM, and a Pentium II CPU @ 500 MHz or better in order to install the software. In short, the video converting software will work on pretty much any type of computer. However, it is important to note that having better specs will allow the conversion process to occur faster so make sure to install the software on your best machine.

The next part of this DVDFab 11 Video Converter Review is all about the UI. The overall design of DVDFab 11 is cleaner and more straightforward than on its predecessor and that extends to the Video Converter module as well. The module is still located in the top menu and can be easily accessed with a simple press of a button. The video converting software has a similar layout to the other main modules to keep things familiar. However, the converter does have an extra button labeled “Add from Mobile” that lets users load videos directly from their smartphones or tablets. 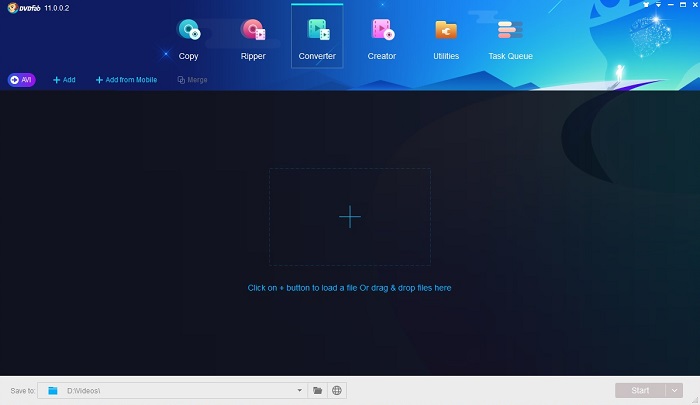 After the video has been loaded a new set of buttons appears that can be used to personalize the video. The Advanced Settings seem pretty much identical to what we had in DVDFab 10 but the Video Edit user interface looks a bit different. You have access to the same video editing tools as before but now they are presented in a manner that’s more streamlined and easier to use. The UI now also includes an option that lets users upload their videos directly to social media platforms after the conversion is complete. This button is located near the bottom next to the folder icon used for picking the output location. Another small detail some users might miss is a button that appears after the video conversion software does its job and can be used to send the output video directly to DVDFab Player 5 for quick playback. 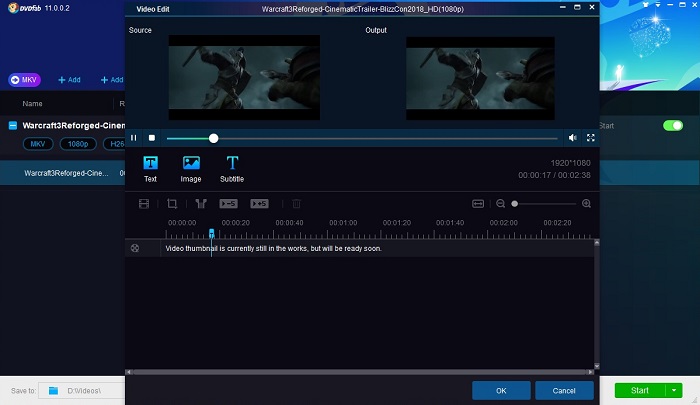 We already mentioned the main features but in this section of our DVDFab 11 Video Converter Review we’re going to take a more in-depth look at them. The first thing to note about this software is that it supports a ton of formats ranging from common ones like MP4, AVI or MKV all the way to various types of 3D and 4K formats. In addition straight-up video conversion, the tool is also fully capable of converting videos to audio-only files and even has a conversion option for web-optimized videos that are perfect for YouTube. All of these options can be selected from the Profile Switcher, which also includes conversion options optimized for specific devices like smartphones, tablets or certain gaming consoles. 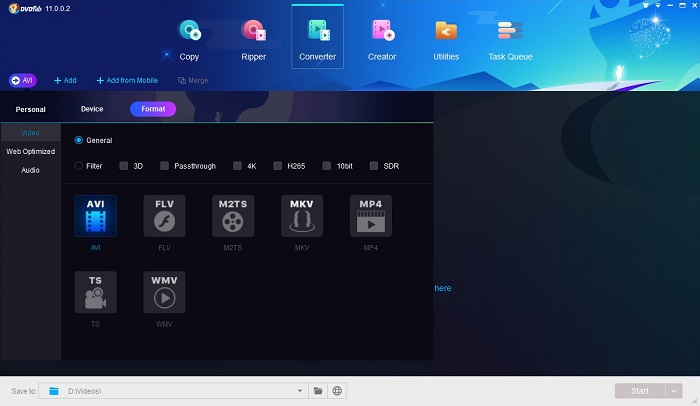 Loading files to the video converting software can be done either by using the “+” button or by dragging and dropping them into the center area. Videos can be added not only from your computer but also directly from a mobile device. Similarly, the output can be saved locally, sent to a mobile device or uploaded directly to social media, as mentioned earlier. Currently, converted videos can only be uploaded to YouTube but other platforms like Facebook and Vimeo will also be added very soon. DVDFab 11 lets users convert a video with lightning speed and can even convert multiple videos at a time thanks to its batch conversion feature. In addition, the tool also supports file merging and has the ability to transfer all available metadata from the original video to the output. 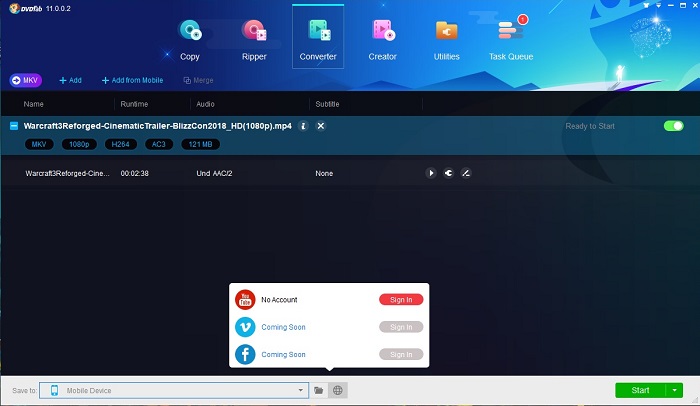 As far as video editing and customization is concerned, there are plenty of options to play with. The first set of options is found under the Advanced Settings menu and include things like resolution, video quality, encoding method, frame rate, and more. Meanwhile, the Video Edit button does exactly what it says and lets you change things like brightness, contrast or saturation, offers cropping and trimming tools, and allows you to add your own subtitles or watermarks. The video editing tools are quite powerful and one of the many reasons why this isn’t just your regular video converter. 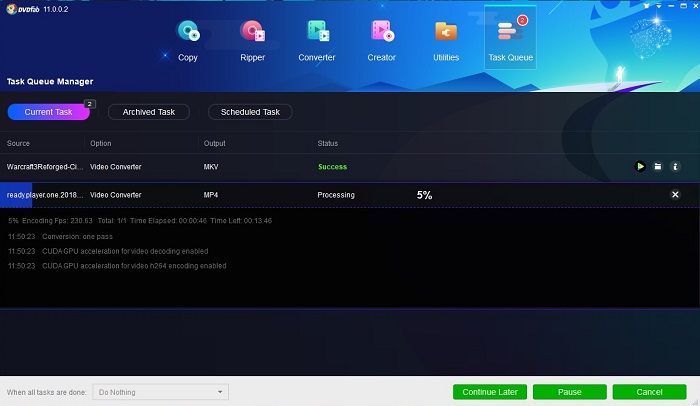 Hopefully, our DVDFab 11 Video Converter review gave you some insight into this excellent tool. With support for all the most important formats, powerful video editing and customization tools and numerous unique features, this software is perfect for both inexperienced and veteran users. In addition to the Video Converter module, DVDFab 11 also comes with professional tools that let us copy or rip DVDs and Blu-rays, including 4K UHD Blu-rays, create your own discs, download videos and music from YouTube, record your screen activity, and more.

The new DVDFab 11 is faster and more stable than previous generations, supports even more formats than before, and offers a companion app on Android and iOS that can be used to monitor all tasks in real-time on your mobile device. DVDFab 11 offers a 30-day free trial so don’t hesitate to download it before checking out the full version that gives you access to even more great features.