Samsung has overturned Apple to be the world No. 1 smart phone producer by market share, thanks to its massive-model strategy. The minority wonder that Apple is losing the competition as it produces only one phone while Samsung produces a basket, and that basket is a very big one. Taking its Galaxy lineup as example, Samsung always likes to issue several variants under one certain model.

Galaxy S II was considered as a classic model, which used to make very good reputation for its master. Now let me ask you a question, do you usually watch videos on your Galaxy S II? If yes, you might be very interested in getting to know how to convert DVD movies for this smart phone, on your Mac computer. The answer is that we should bring in a third party software which is called a Mac DVD Ripper software, like DVDFab DVD Ripper for Mac, which converts all your DVDs into Galaxy S II playable videos:

Can’t wait to see how to do that? Just move on:

Ripping DVDs for Galaxy S II on Mac: Step 1 -> Download and install the latest DVDFab 9 onto your computer;

Ripping DVDs for Galaxy S II on Mac: Step 2 -> Launch DVDFab 9, choose Ripper option from the Option Bar at the Main Interface, then load the Blu-ray you are about to convert; 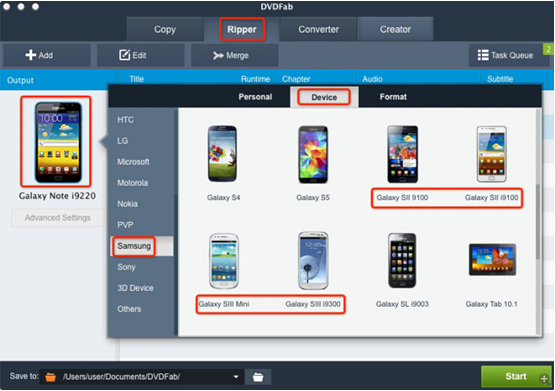 Note: Selecting Galaxy S II profile from the built-in Profile Library is the key point of the whole process.