How to Convert or Merge DVDs to Blu-rays Discs, ISO, or Folders

Many people are looking to convert to Blu-rays since it's Blu-ray an awesome media storage technology. It is a superior advancement to DVDs with larger storage and high definition audio and video resolution support. A single layer standard Blu-ray disc can hold nearly 25GBs of data. That’s why Blu-ray discs have become the default media storage standard for high resolution movies. You can still find DVDs of latest movies,but they often don’t get commercially produced just like Blu-rays because of less demand and low video resolution.

DVDFab DVD to Blu-ray Converter is a powerful software which can merge multiple DVD discs, ISO, or folders into a single Blu-ray disc, ISO, or a folder. Given below are the notable features of this software.

You may not know this that a DVD has 4 types which are DVD5, DVD9, DVD10, and DVD18. The standard DVD types are DVD5 and DVD9, while the last two types aren’t commonly used. With DVDFab DVD to Blu-ray converter you’ll mostly be using the DVD5 and DVD9 types only. Check the individual descriptions of these types.

1. DVD5: It has a maximum capacity of 4.7GB and is the most common type of DVD used by us. It is single layered only.

2. DVD9: Can hold data up to 8.5GB. These types are mostly used in commercially produced movie DVDs. It is a single layered DVD.

3. DVD10: Has a maximum data holding capacity of 9.4GB. It is a double sided single layer disc.

Just like DVDs, Blu-ray discs also have 4 types. Out of 4, two are unofficial types. These types are BD5, BD9, BD25, BD50. Check their descriptions below.

1. BD5: In reality no Blu-ray disc of this type exists. A BD5 is just a normal DVD5 which is used to burn a Blu-ray movie under 4.7GB. DVDFab DVD to Blu-ray is able to create a BD5 ISO or a folder.

2. BD9: It is an unofficial Blu-ray disc type and uses a DVD9 to burn a Blu-ray movie having size less than 8.5GB.

3. BD25: This is the standard Blu-ray disc type which holds 25GB data. These discs are physically available for purchase.

4. BD50: The second official BD type which can store 50GB of movie data. BD25 and BD50 are the excellent choices for merging multiple DVDs into a single Blu-ray disc, ISO, or a folder.

We bet that you will not be confused about DVD and Blu-ray disc types from now onwards.

DVDFab DVD to Blu-ray Converter isn’t available as a standalone software rather it comes as an integral part of DVDFab 12. So, you have to download DVDFab 12 which is available for Mac and Windows. Check the download links below.

The installation procedure is quite simple. Just download offline or the online installer of DVDFab 12, double click to open the file and follow the on-screen instructions to install the software. This just requires only few clicks.

A DVD or a Blu-ray ISO is an exact copy of the movie data stored on the physical DVD or Blu-ray disc. A DVD/Blu-ray ISO image is a single package file that contains this data. Similarly Blu-ray or DVD folders are the exact copies of their corresponding movies data but in form of a folder directory. Many people create ISOs or folder just to make soft copies of their DVDs and Blu-rays which also serve as disc backups stored on a computer’s hard drive. Here are some interesting facts about DVD/Blu-ray ISOs and folders.

We are happy to tell you that DVDFab DVD to Blu-ray Converter fully supports disc ISO images and folders. So, even if you have different DVD ISOs or folders,then feel free to follow this article to convert or merge DVDs to Blu-rays discs, ISOs, or folders.

Part 3: How to Convert or Merge DVDs to Blu-rays Discs, ISO, or Even Folders

Important Note: If you have physical DVDs than only one DVD can be converted to a Blu-ray. This is because your computer has only one optical drive which can’t read more than one disc at a time. If you’re looking to merge multiple DVDs to Blu-ray,thenyou should have DVD ISOs or folders of different movies. But if you don’t have ISOs,thendon’t worry. For merging multiple DVD discs to Blu-ray you should follow the steps below first before doing anything.

1. Make a parent folder named ‘Movies’ on your computer’s desktop.

3. Now insert the DVD disc in the optical drive, open it and copy the ‘VIDEO_TS’ folder to the ‘Movie 1’ sub-folder.

4. Remove the disc when copy process gets over and insert the second DVD disc and copy its ‘VIDEO_TS’ folder to the ‘Movie 2’ sub-folder. You can copy multiple DVDs like this.

5. You can merge a maximum of 5 standard DVDs to a BD25 Blu-ray and approx 10 DVD movies to a BD50 disc if you go by their 25GB and 50GB storage size. You should use ‘Passthrough’ processing for this as discussed in the part below.

Now you have DVD folders of different movies and now we can start merging them to Blu-ray format.

At this point you should have installed DVDFab 12 on your system. It is a paid software and if you’re using this for the first time then you’re lucky because you can use this software fully during its full-featured trial period. So let’s begin. 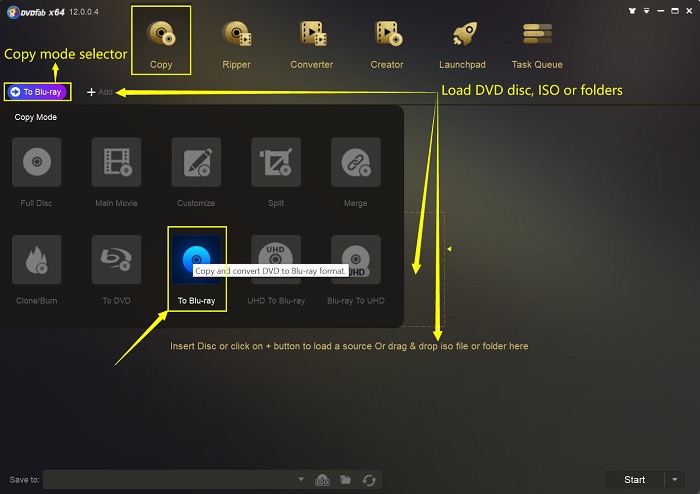 Step 2: Click ‘+Add’ and load the ‘VIDEO_TS’ folders of different DVD movies from the corresponding sub-folders named as ‘Movie 1’, ‘Movie 2’, etc. DVDFab 12 will recognize these ‘VIDEO_TS’ folders as a complete DVD. Load these folders one by one,unless you see multiple DVD folders loaded in the program. In addition to these folders you can also load a DVD from the optical drive. See the image below. 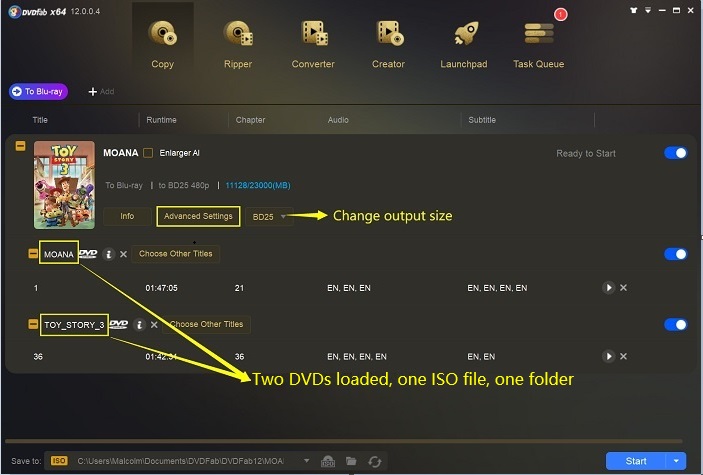 Step 3: After loading the DVD folders,click the ‘Advanced Settings’ button as shown in the image above. Click ‘Output’ and select the Blu-ray disc type as BD50, BD25, BD9, or BD5. Choose the right typeas per your need. To check for BD disc types scroll above and read ‘Part 1.2’. 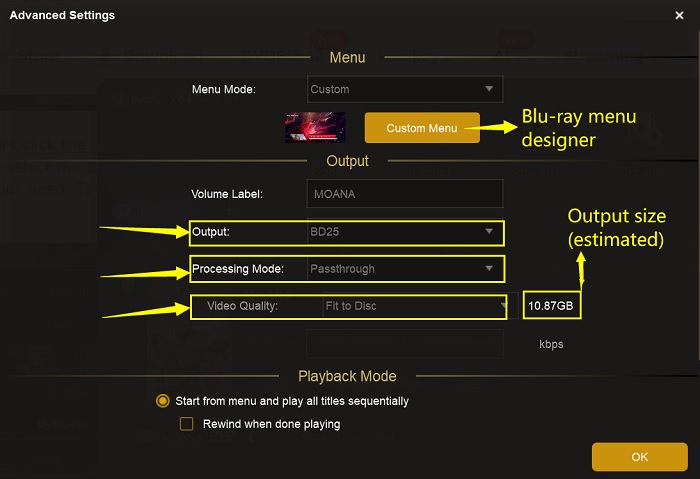 Step 4: Click ‘Processing Mode’ and either select ‘Passthrough’ or ‘Conversion’. Passthrough will maintain the exact DVD quality and size on the output Blu-ray. While ‘Conversion’ can provide enhanced quality. If selecting ‘Conversion’ then you have to also select the ‘Video Quality’.

Video quality can be selected as video bit-rates which are 15, 20, 30 Mbps, ‘Fit to Disc’ or ‘Customize’. On selecting the appropriate bit-rate the final output size estimate will be shown in GBs just next to it. Use ‘Passthrough’ if you want to merge multiple DVDs to Blu-ray.

Step 5: You can also click ‘Custom Menu’ and design your Blu-ray menu or can set the menu to ‘No Menu’ from ‘Menu Mode’. You can leave this now as we will share a tutorial for custom menu designing later in this article. Click ‘OK’ to go back to the main UI window.

Step 6: A commercially produced DVD has many video files along with the main movie. These additional videos can be some promotion videos that is of no use. You can choose to select or de-select these videos and select only the main movie.

Click ‘Choose Other Titles’ and select the video files along with the by-default selected main movie. You can also play a video here to check if it is the right one that you want to select by clicking the green ‘Play’ button which appears on hovering the cursor over the video title. Repeat this step for all the DVDs that you have loaded. 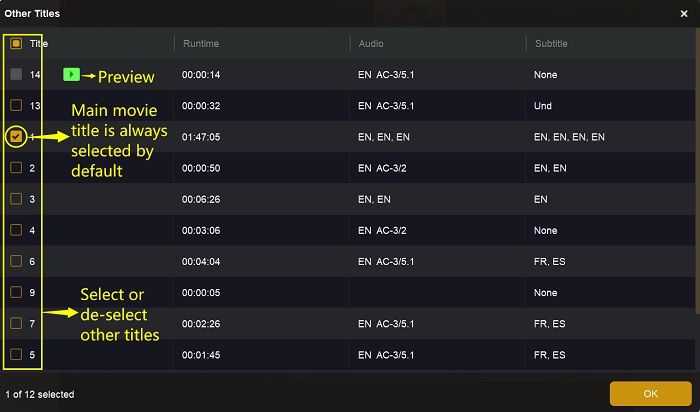 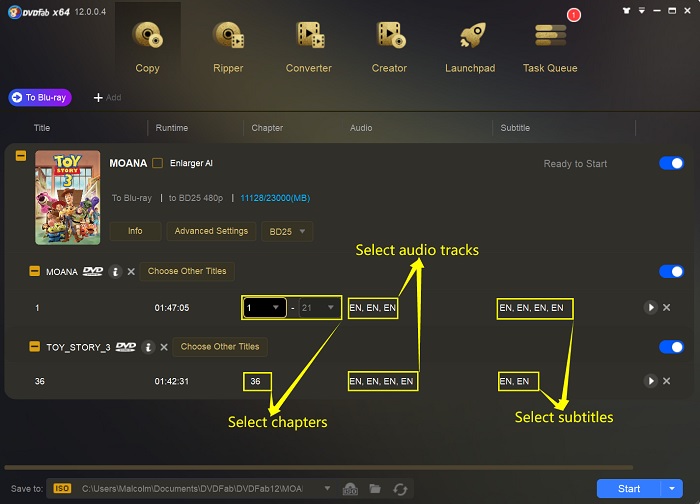 Step 8: At this point we are just ready to start merging the DVDs to Blu-ray. But if you want to learn more about the ‘Custom Menu’ then skip the next step and jump to the Blu-ray menu designing tutorial in ‘Part 3.2’ below. You can then resume the tutorial from here again. However, if you don’t want any Blu-ray menu and already selected ‘No Menu’ previously then move to the next step below. 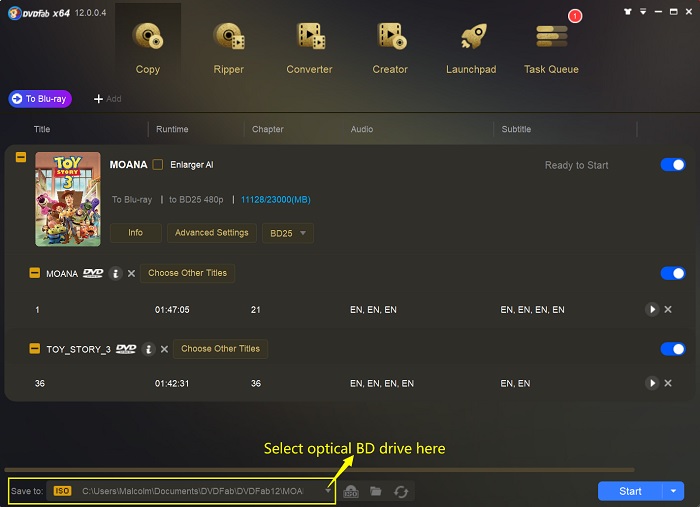 Step 11: If you don’t have a BD-ROM optical drive then save the project as a Blu-ray ISO. Click the ‘ISO’ button as shown in the image below and select the output location to save the Blu-ray ISO. Finally click the ‘Start’ button and wait till the conversion and merging process completes. You can burn this ISO later to a blank Blu-ray disc. 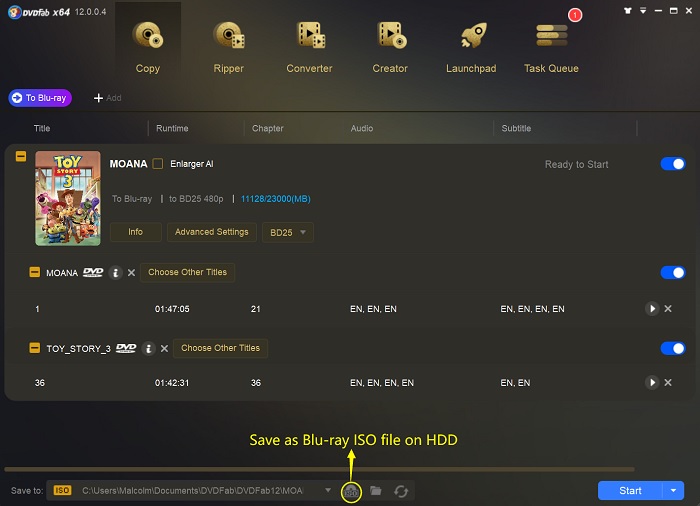 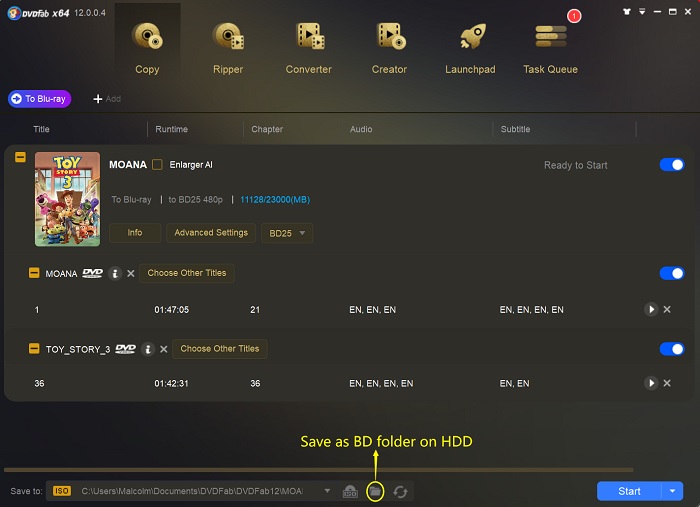 You now have successfully learned to copy DVDs to Blu-rays. You can now play this freshly prepared Blu-ray on your BD player. Remember that some hardware and software players can directly play Blu-ray ISO files and folders, though the device compatibilty list is not that vast but still many of them can play.

Here’s a quick tutorial for designing a custom menu for your Blu-ray disc, ISO, or folder. This part is proceeding directly after the ‘Step 8’ from above that you have skipped to learn menu designing from here.

1. Head to the ‘Advanced Settings’ and click its icon as shown in ‘Part 3.1’. Click the ‘Custom Menu’ button to launch the Blu-ray menu designer. Check the important functions below. 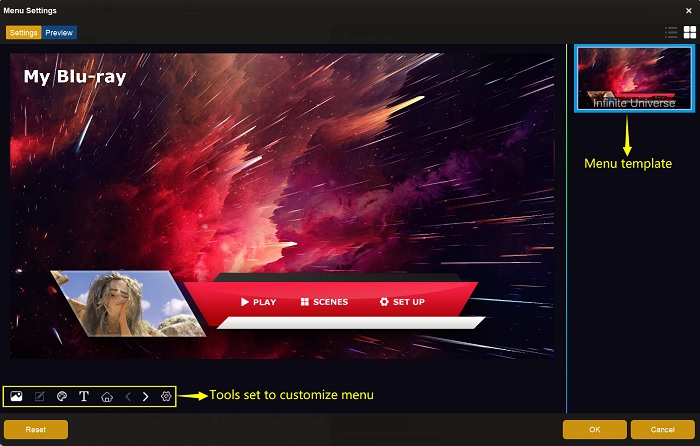 3. You can use the tools set to add custom backgrounds, adding image widgets, adding texts. You can also drag and drop the visible text or items on the screen.

4. To add text click the ‘T’ button and replace the ‘Text’ string with your custom text. Use the on-screen text formatting tools like bold, italics, font size, color, and font. 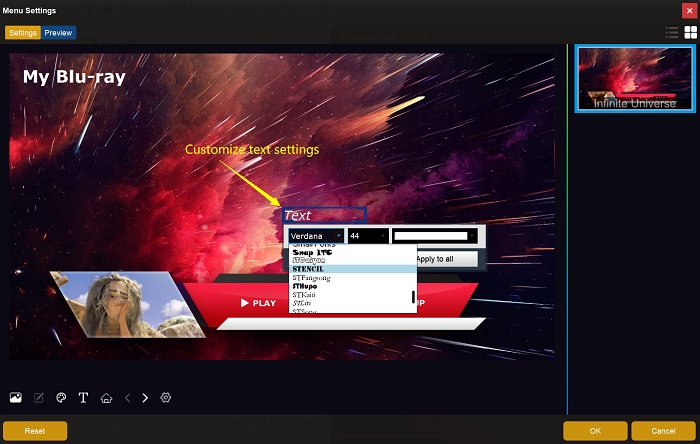 5. Use the ‘Next’ and ‘Previous’ buttons in the tools set to access the other menu screens for customization. Click the ‘Preview’ button once you finish designing the Blu-ray menu. Click ‘OK’ to go back to the main UI window.

Now you can resume with ‘Step 9’ from the ‘Part 3.1’ that you have might have skipped to learn the Blu-ray menu designing process in this part.

You just have learned to use a powerful software which has the ability to convert and merge DVD(s) to a single Blu-ray disc, ISO, or a folder. For information on how to copy DVDs to Blu-ray, please visit our detailed tutorial to see how to do so.

After reading this brief article you’ll never get confused about DVD and Blu-ray types. You also now know what a DVD/Blu-ray ISO and a folder is? And most of all you just have learned to copy DVDs to Blu-rays. DVDFab DVD to Blu-ray is currently the best software which is able to convert DVDs to Blu-rays with powerful customization options related to disc types, video quality, custom menu.

This is the one of those reliable software which can collectively process or merge DVDs to Blu-ray without getting crashed thanks to DVDFab’s powerful hardware acceleration technology. If there is nothing left you want to hear from us about this software then it’s the right time to give this software a worthy try. Please download, install, and start using the software to find out how well it works for you.