What is the best free Blu ray player Windows 10? How to play Blu rays on Windows 10 free and easily? The best Blu-ray players are typically needed for top quality and highly comfortable movie/video experience. Since it’s not all media players that are capable of playing Blu-ray discs, you’d need any of these professional media players to enjoy seamless playback of your Blu-ray movies or videos.

Also, Blu-ray discs are used to store premium videos with high resolution up to 4K, and they offer more capacity than DVDs, being that a Blu-ray disc (BDXL) can hold up to 128GB storage. Nowadays, most people are turning to Windows 10 version since it boasts more powerful features. So, if you’re looking for the best free Blu ray player for Windows 10/8/7, we’ve got you covered in this post.

Before figuring out how to play Blu rays on Windows 10, let's check the top 8 best free Blu-ray player Windows 10 programs you might need to enjoy your favorite Blu-ray movies or videos.

Compatible with Windows and Mac, this best 4K video player is practically the most powerful Blu ray player software. Powered by a re-engineered media playback engine, the app can load 4K UHD Blu-ray files up to 10x faster than other media players alike. It comes with two distinctive playback modes for your PC or compatible smart TV with unmatched UI design. DVDFab Player 6 supports navigation menu on all media formats of which Blu-rays is not excluded. 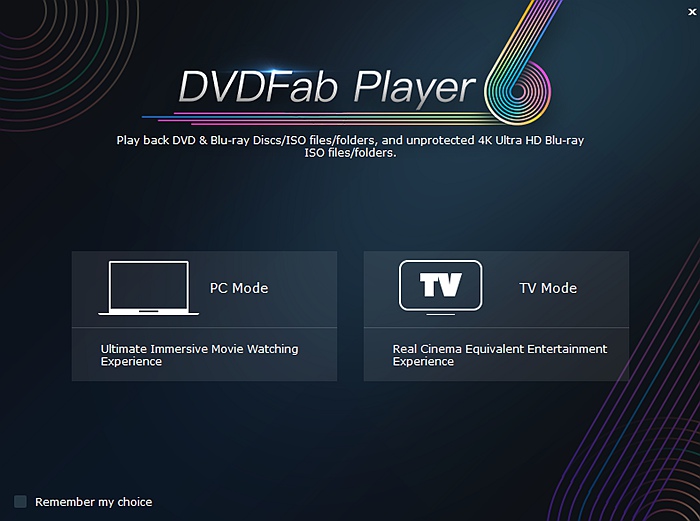 Also, with support for 3D videos, DVDFab Player 6 can playback 3D Blu-ray discs, folders, ISO files and SBS (side-by-side) or top & bottom 3D videos. Plus, this Mac and Windows Blu ray player software supports Hi-Res audio output quality which makes the app a perfect option for homes having an acoustic system equipped with state-of-the-art technology. It doesn’t stop here, DVDFab Player 6 includes support for all forms of media format and resolution all the way up to 4K HDR.

It's time to make a long story short. Here are the feature highlights of this best Windows 10 Blu ray player software.

Apparently, you can get this Blu ray player downloads for free before the final subscription. That being said, playing Blu rays on Windows 10 will be free and easy. You'd better not miss out on such a freeware Blu ray player Windows 10 program.

Then, follow me to discover more free Blu-ray Players Windows applications. The below Blu-ray players for Windows 10 are available for free and they are also compatible with Windows 10, 8, 8.1, 7, XP, and even older versions. However, unlike DVDFab Player 6, there are some limits to the Blu-ray files you can playback with these free apps.

As the name tells that this is a great app for playing Blu-ray discs and like you can also decode from the name, it is available for free. This media player comes with an intuitive interface and loads Blu-ray quite faster than you may assume. The free Blu-ray player software is well capable of playing Blurays on Windows 10 with vivid audio output quality.

This is an intuitive Blu-ray player for Windows OS with flexible settings. It supports a variety of other media formats which includes DVD, VCD, AVI, MKV, FLV, RealMedia, and QuickTime. The Blu ray media player app is optimized to run expressly even on low-end PCs, thanks to a patented hardware acceleration engine.

Using KM Player to playback Blu-ray discs is easy and enjoyable because of its robust playback engine and support for high-quality and Ultra HD videos up to 60FPS.

Free 4K Blu-ray Player is another great Blu ray media player for Windows with versatile features. It is one of the Blu ray player apps as you can detect from the name, plus, it offers seamless playback for Blu-ray files you throw to it. The app plays Blu-ray files directly with 1080p HD visual effect and also plays H.265/HEVC encoded 4K media lossless on Windows OS computers. However, this isn’t a full-featured media player; so, you shouldn’t expect much from it.

The VSO media player doesn’t have to download external codecs to read your media files and is capable of playing Blurays on Windows. It is a completely free Blu-ray player with a clear interface window to play your videos. This app is a free Blu-ray player for windows; however, if the Blu-ray is saved on an optical drive, you may need a decryptor such as Blu-ray Copy to open them.

Interestingly, the free Blu-ray player app supports text subtitles and allows the user to customize video settings. With VSO player, you can play practically all Blu-ray files and folders on your Windows PC.

This is an all-in-one Blu-ray media player for Windows OS. It comes with a simple interface which can be easily understood, and it has support for various media formats and codecs. Leawo Blu-ray Player is capable of playing Blu-ray media files with stunning output quality. The app is compatible with practically all versions of Windows OS and is quite lightweight. Though it is not free Blu-ray player, you can have a try within limited time.

VLC is a famous open source Blu ray player believed to be compatible with all media formats. Well, it is really compatible with various media formats, but when it has to deal with Blu-ray, VLC doesn’t play this format expressly, you have to perform some tweak before it can playback your Blu-ray movies/videos.

How to play Blu-ray on Windows 10 with VLC Windows10 Blu-ray player? Once you have added the files above, you can now playback your Blu-ray discs on Windows PC seamlessly just like every other format. VLC is wholly available for free but, it is not the best Blu-ray player for windows.

This Blu-ray player for Windows OS can play BD directly and is capable of choosing subtitles/audio tracks. AUN media player can play unprotected and decrypted Blu-ray formats freely without hassles. It comes with a simple interface that is very easy to read and navigate.

Part 2: How to Play Blu-rays on Windows 10 Free with DVDFab Player 6

As mentioned above, you can download and use this Windows 10/8/7 Blu ray player free. It does not bother you to install it on PC or laptop to play DVDs easily wherever you like. This free Bluray player Windows 10 aims to bring you stunning viewing experience. 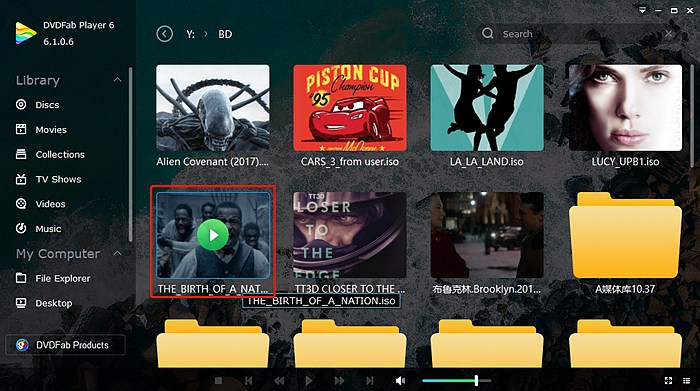 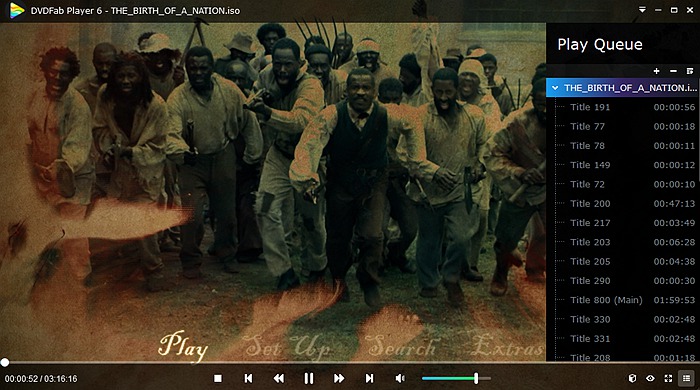 With three simple clicks, you can play Blu rays on Windows 10 free and easily. Note that you can enjoy 3D Blu-rays with this best free Blu ray player software. By the way, you can upconvert Blu-rays to standard 4K Ultra HD Blu-rays for quality playback. How to achieve that? DVDFab Blu-ray to UHD Converter comes in handy.

There are quite a lot of Blu ray player software Windows 10 programs out there which claim to play Blu rays on Windows or macOS, but you’ll be disappointed to know that a higher percentage of these media player cannot open Blu-ray files. Save yourself the stress of trying out several media apps, just to play your favorite Blu-ray movies. Choose one from our list and enjoy a seamless Blu-ray movie experience. What is the best free Blu ray player Windows 10? DVDFab Player 6 shall rank top on the list since it comes with more features, support, and no limitations. Other ones are still outstanding and offer great visual and audio output quality, but, most of them are limited and cannot play all Blu-ray disc formats.

According to the above introduction, you must have known which Blu-ray player is the best one for you. Then would you like to copy or rip your Blu-ray movies? Click the link to know the top 6 best Blu-ray decrypters 2021.

3-in-1 video converter to convert and edit videos & audios