How to Rip Blu-ray for Google Nexus 7 on Mac?


Amazon has successfully opened a huge market for consumer electronics in June 2013, paving way for its own branded tablet Kindle Fire (HD) to gain more market share in the world’s largest populated land. How about Google? Google also has its own tablet Nexus 7, which is as excellent as Kindle Fire, both in terms of hardware and software. Its 7 inch HD backlit IPS display with a resolution of 1200*800 and a ppi of 216 seems even superior to Kindle’s. It will be at least equally good when you watch HD movies on this screen. There is a way for you to test that, Mac Blu-ray Ripper software is a piece of video converting tool which helps you rip any Blu-ray to Google Nexus 7 compatible video files, and DVDFab Blu-ray Ripper for Mac is such a kind of software tool.

Check out the instructions below to learn how to do that:

Rip Blu-rays for Nexus 7 on Mac: Step 1 -> Download and install the latest DVDFab 9 onto your computer;

Rip Blu-rays for Nexus 7 on Mac: Step 2 -> Launch DVDFab 9, choose Ripper option from Option Bar at the Main Interface, then load the Blu-ray you are about to convert;

Rip Blu-rays for Nexus 7 on Mac: Step 3 -> Select the movie title, audio track and subtitle stream you want to keep at the Operation Window, click “Profile Switcher” to find Nexus 7 from Profile Library and press "OK" button, then just hit  “Start” button at the Main Interface to go converting. 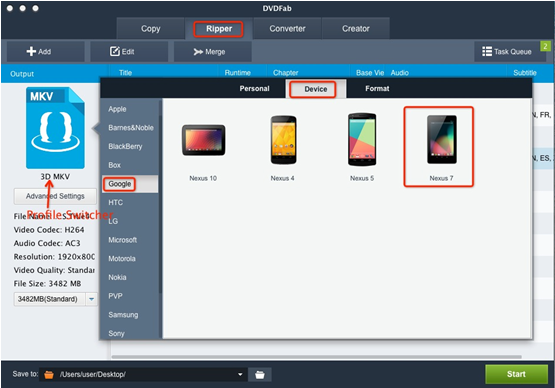 Note: selecting Nexus 7 profile from the built-in Profile Library is the key point of the whole process.