How to Convert 4K UHD to Blu-ray for Quality Viewing

There might be times when you have to convert 4K UHD to Blu-ray for quality viewing on cheaper HD devices. 4K Ultra HD Blu-rays are currently the best choice for watching movies in ultra-high definition with peak image quality. A single UHD Blu-ray disc can hold around 100GB of movie data and it is also known as BD-XL. 4K UHD Blu-ray discs are seeing regular advancements and now many of you can find 4K UHD Blu-rays having storage capacity of up to 300GB. But remember that by any means a 4K UHD Blu-ray can’t be played on a standard Blu-ray player. Now this is the situation when most people stop thinking about watching that movie in ultra-high definition.

Well there isn’t an official way which can let you play a 4K UHD Blu-ray disc on a modern Blu-ray player. But you can apply alternatives and the most useful one is to convert 4K Ultra HD Blu-rays to Blu-rays. Yes, we are talking about normal Blu-ray discs that you can play on your existing BD player. So, in this article we are sharing a detailed article with you which will teach you to convert any 4K UHD Blu-ray to normal Blu-ray disc format. And the software responsible for this useful conversion is DVDFab UHD to Blu-ray Converter.

DVDFab UHD to Blu-ray Converter is a powerful 4K UHD Blu-ray to standard Blu-ray converter software. It takes 4K UHD Blu-ray disc, ISO, or folder as the input and converts it to standard Blu-ray format (BD25, BD50, BD66, BD100). It can also directly burn Blu-rays with its built-in sophisticated BD burning engine. In this software you will find lots of creative Blu-ray customisation options that will make yourself feel like a power-user. You’ll learn all these creative options and features of this software in different parts of this article. But first of all, you have to download the required software whose links are given below.

What’s a 4K UHD Blu-ray ISO and a Folder

Just like an ISO, a UHD folder is the entire copy of the disc’s data. You don’t need a special software to make a UHD folder, just copy the disc contents somewhere on your computer’s hard drives, but don’t alter the folder directories and names otherwise some programs may not recognize it as a valid 4K UHD Blu-ray folder.

In this article we will be converting a 4K UHD Blu-ray to a standard Blu-ray disc, ISO, or a folder. Blu-ray discs have basically four types which are as follows.

While using the DVDFab UHD to Blu-ray converter you can either choose to burn a physical disc of these types, or create an ISO or folder. Remember that ISOs and folders can be burned to blank Blu-ray discs anytime.

First of all, you are suggested to check whether your 4K UHD Blu-ray disc drive is friendly or not. If not, you need to downgrade its unfriendly firmware with professional UHD drive tool. 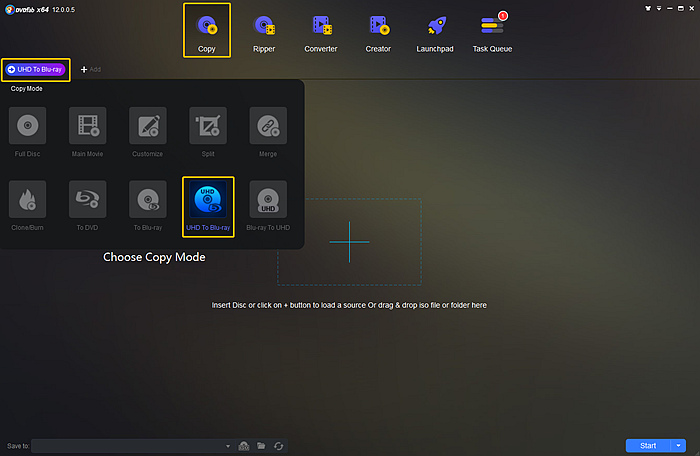 Step 2: If you do have an internal 4K UHD Blu-ray burner then insert your UHD disc into it and DVDFab 12 will automatically load the disc. You can also load a 4K UHD ISO, or a UHD Blu-ray folder by clicking the ‘+Add’ button or the larger ‘Plus’ icon in the middle of the main software window. 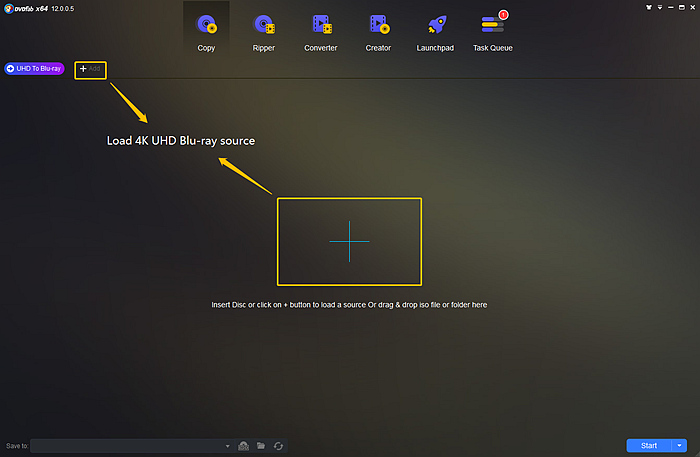 Step 3: After loading the 4K UHD Blu-ray source (either a disc, ISO, or a folder) the main UI window will look like as shown in the image below. Also check the important labelled information. 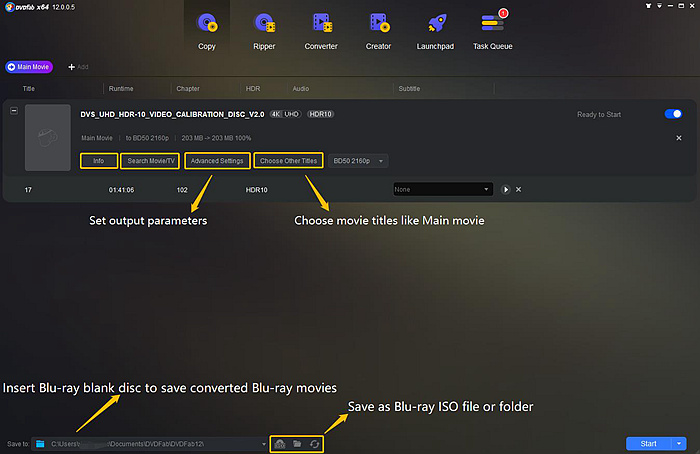 Step 4: Click the ‘Advanced Settings’ button and from here select the output type of Blu-ray disc. You can select either BD25, BD50, BD66, or BD100. Double click the ‘Volume Label’ field and enter the desired name for your Blu-ray. You can also use ‘Custom Menu’ to design the Blu-ray menu for your output disc type, but we will discuss it later in another part. After changing the settings click ‘OK’ to go back to the main program window. 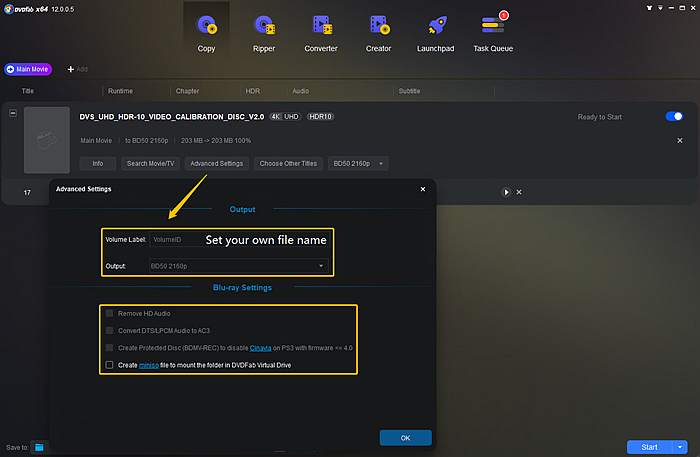 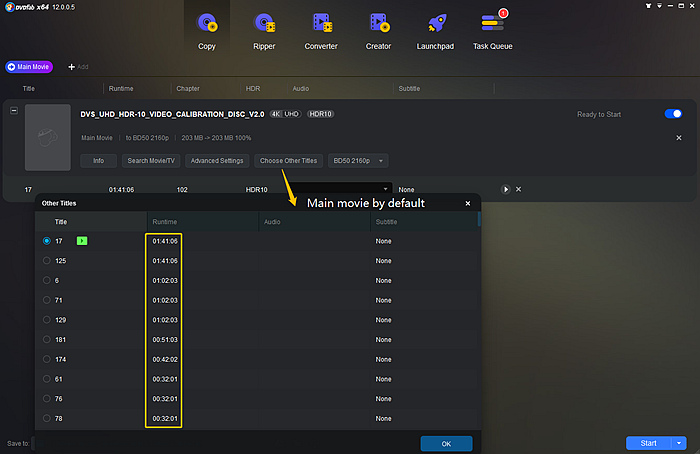 Step 6: While processing a movie disc like a DVD, Blu-ray, or 4K UHD DVDFab always selects the main movie by-default and skips all other video files. These files are extras and may not be of much use, but still you can choose them to be put on your output Blu-ray disc, ISO, or folder. Click the ‘Choose Other Titles’ button and select other video if required. Hover the mice pointer over any video title this will bring a green play button in sight. Click this button to play a movie title to check if it is the right one to be selected. 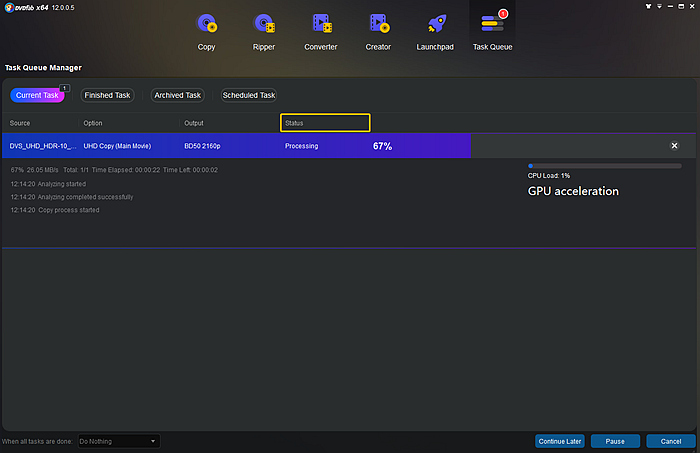 Click the ‘Save to’ field and select the ‘4K UHD burner Optical Drive ROM’ from this list. Hit the ‘Start’ button and when prompted insert the blank Blu-ray disc for burning. DVDFab 11 uses a powerful and error-free Blu-ray burning engine and discs burned by this burning engine are highly compatible with consumer-grade Blu-ray players.

Create an ISO or Folder: If you don’t have a 4K UHD or a standard Blu-ray burner then consider creating an ISO or a folder. Click the ‘ISO’ button and select the save location and then click the ‘Start’ button to start creating an ISO as the Blu-ray output created from your original 4K UHD Blu-ray disc. If you do want to save the Blu-ray output as a folder then click the ‘Folder’ icon instead of the ‘ISO’, select the save location and hit the ‘Start’. When the conversion process gets completed move to the output location and transfer the Blu-ray folder/ISO to your favorite PC device for playing.

So, this was the complete tutorial to convert 4K UHD Blu-ray to Blu-ray using the DVDFab UHD to Blu-ray converter. Once done, you can play converted Blu-ray movies via the world's best Blu-ray player, DVDFab Player. 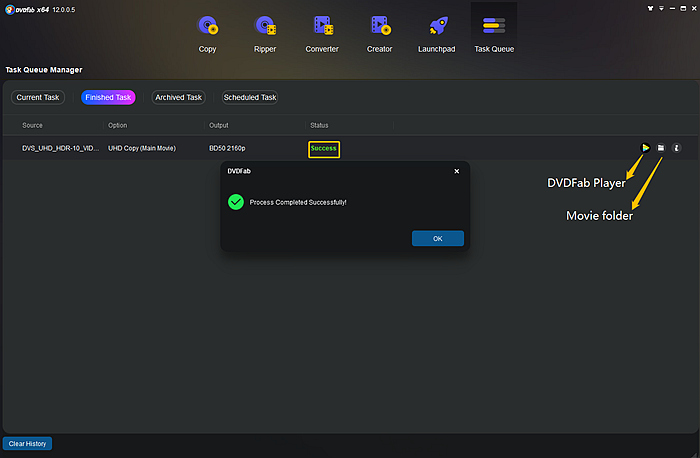 First of all, open ‘Advanced Settings’ from the main program window. And then click ‘Custom Menu’. Please note, if you still aren’t interested in creating custom Blu-ray menu then simply select ‘No Menu’ from ‘Menu Mode’ in ‘Advanced Settings’. This will open a separate window as shown below.

To add custom text, click the ‘T’ button and replace the ‘Text’ string with your favorite text. Use the on-screen text formatting tools like bold, italics, font size, color, and font.

Just next to the ‘Home’ button in the tools set there exists the ‘Next’ and ‘Previous’ buttons which will let you access the other menu pages. Click the ‘Preview’ button once you finish designing the Blu-ray menu. Click ‘OK’ to go back to the main program window.

We just want to keep this part as simple as possible without repeating the same things. Today people only want a software that does exactly what it says and doesn’t waste their precious time. We ask you, would you download a software today that claims to solve a problem but actually has a controversial problem solving performance? You’ll definitely say No! DVDFab UHD to Blu-ray Converter is not that kind of software, it strictly focuses on what it is being advertised for. Here are some strong reasons to choose it over any other UHD to Blu-ray converter software.

It is now clear from this article that there is no better choice than DVDFab UHD to Blu-ray Converter when it comes to downscaling your UHD movies to standard Blu-ray formats. This software not just converts 4K UHD to Blu-rays but also provides creative customization options which prove its versatility. You’ll be amazed after knowing that how good it is at preserving the original lossless audio tracks. With a powerful audio hardware, you can enjoy the pure digital surround sound on the converted Blu-ray movies. It also equips modern hardware acceleration technologies powered by Intel, Nvidia, and AMD which will boost the conversion. Without thinking for a while, you should go ahead and download this software to start using it. DVDFab UHD to Blu-ray is powerful, versatile, crash-free, safe, fast, reliable, and does what it says. Now it is up to you how do you want to use it.