Common Types of 4K Blu-ray Burner You Need to Know

The Most Complete DVD/Blu-ray/4K UHD/Video Solutions

DVDFab 11 offers the world's best services related to DVD/Blu-ray/4K UHD/Video. It can copy, convert, or create DVDs/Blu-rays/UHDs and remove their cinavia protection if they are protected. Their original qualities can be preserved or even enhanced under the help of an AI-powered enlarger tool of DVDFab 11. Additionally, DVDFab 11 allows you to change video formats and as well as remove DRM protection.
Free Download Free Download

If you are a 4K media buff, you must have heard of a 4K Blu-ray burner? Do you anticipate burning 4K UHD Blu-ray from high-resolution videos to be playable on your standard home 4K Blu-ray player, professional 4K media player software, or 4K HDR TV? However, look around, you might find professional 4K Blu-ray burner is rare due to its high cost. You might as well read this post to have a better understanding of the 4K Blu ray burners.

Quick Navigation
1. Can You Burn 4K to Blu ray?

4. How to Burn 4K Blu-ray with DVDFab Software

Normally, if you have lots of 4K resolution video clips or 4K movies, you can burn 4K to Blu-ray for better playback on standard 4K Ultra HD Blu-ray player. After all, everyone yearns for watching 4K Blu-ray movies with a grand home theater system at weekends. Meanwhile, burning 4K to Blu-ray helps you store 4K videos or movies for a longer time. To achieve this aim, you need to resort to 4K Blu-ray burners such as professional 4K Blu-ray authoring software, 4K Blu-ray copy program, 4K UHD Blu-ray external drive, and 4K UHD Blu-ray internal burner drive, which function as 4K Blu-ray burner to write 4K data for personal use. With 4K UHD discs, you can enjoy stunning 4K content on the 4K home theater system.

As for the best external 4K Blu-ray burner, Pioneer 4K UHD Blu-ray Burner outranks similar products. This external 4K Blu ray burner (with BDR-211UBK model) is a nice solution to building system and editing video with fast writing speed and wide bland media support, whose BD-R writing speed reaches up to 16X able to read/write sing and dual-layer BD-R discs, DVD and CD format. Besides, this 4K Blu-ray burner for PC works as a Quickplay that enables movie discs to be ready faster, and Auto Quiet mode to fit in with optimal speed, and Peak Power Reducer to suppress power consumption at peak operation. 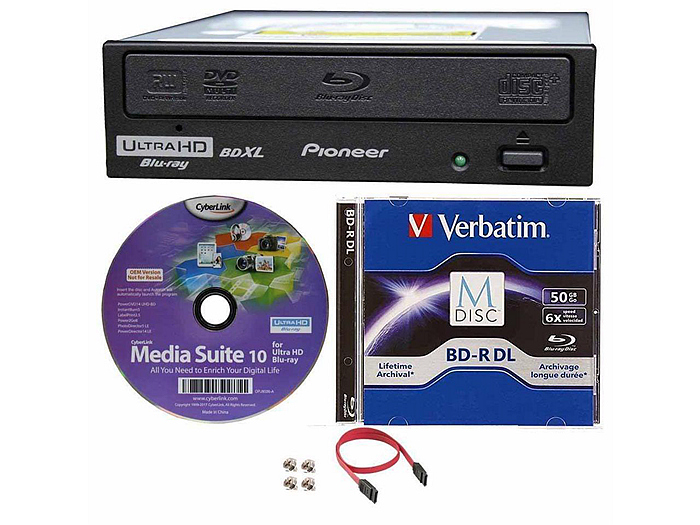 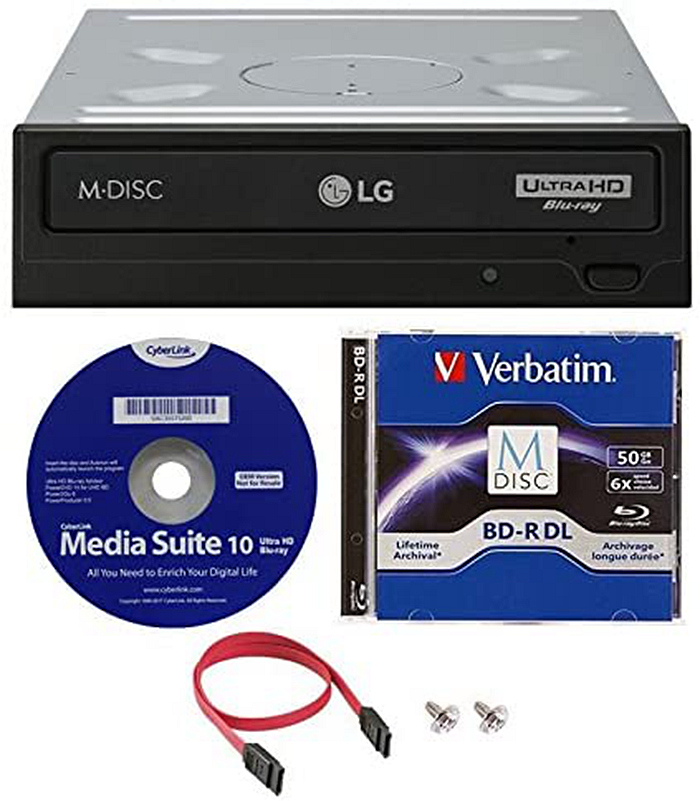 Aside from being a 4K UHD internal Blu-ray burner used to read and write 4K media data, it can deliver life-like and accurate colors with 4K resolution playback. But remember it is only available on Windows. 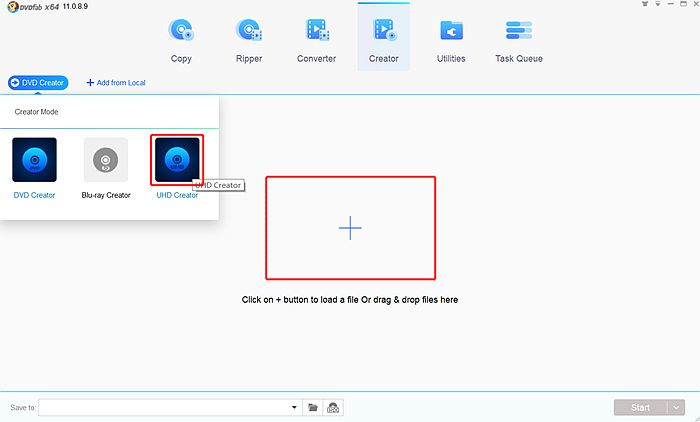 Above all, you can choose to preserve HDR10 and Dolby Vision image quality of the original content for the purpose of quality playback on 4K UHD TVs. To satisfy your personal needs, you can select output quality as BD-25 2160p, BD-50 2160p, and BD-100 2160p and save the output 4K Blu-ray as ISO file or folder saved on computer HDD, or burn 4K videos to a blank disc. 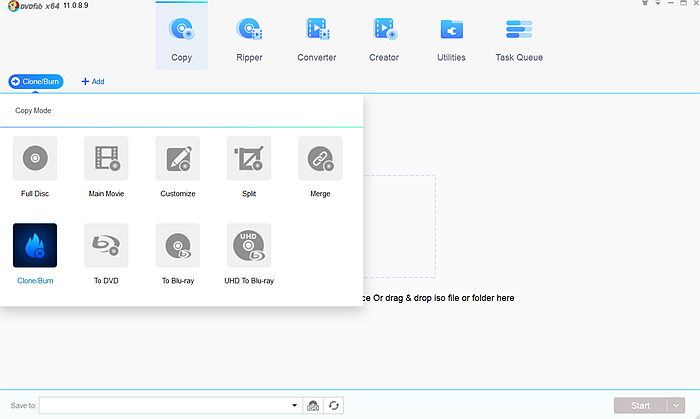 This 4K Blu-ray burner software is intended for home 4K UHD Blu-ray players and 4K UHD TVs by means of copying 4K Ultra HD movies from original 4K Blu-ray discs, thus saving them as lossless or compressed ISO files/folders, or burning them to blank BD-25/50/100 discs with retained Dolby Vision and HDR10 video quality. Up to till now, most 4K UHD titles are fully supported as long as you have a compatible 4K Blu-ray drive, turn to our supported drive list.

4. How to Burn 4K Blu-ray with DVDFab Software

As mentioned above, DVDFab has two master cards to burn 4K Ultra HD Blu-rays. Now let’s get down to checking how to burn 4K Blu-ray with DVDFab UHD Copy and UHD Creator.

How to Burn 4K Blu-ray with DVDFab UHD Creator

Note that only the 64-bit version of DVDFab 11 contains the UHD Creator module. 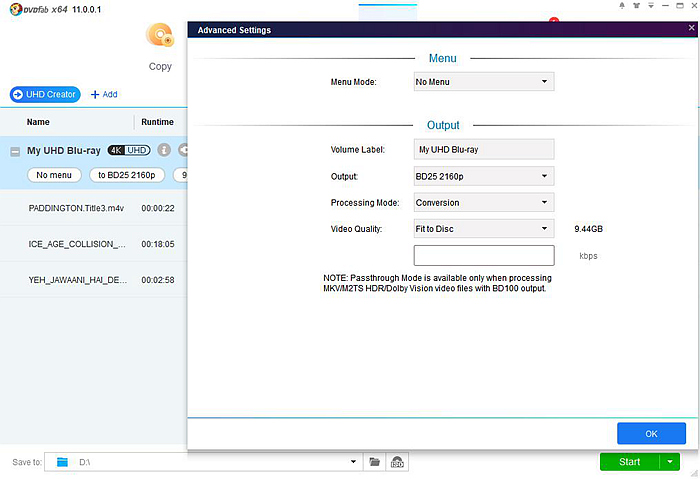 Set file destination to save the output 4K Blu-ray. Hit the 'Start' button to burn 4K Blu-ray. Detailed processing information will be shown on the progress bar. 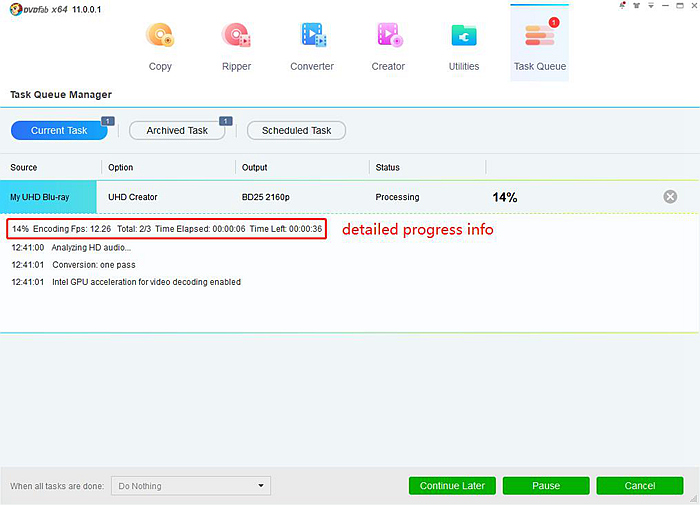 How to burn 4K Blu ray within 3 simple clicks? This 4K Blu ray burner makes it! With this 4K Blu ray burner, there is no need to purchase expensive physical 4K Blu-ray discs for home players. Every penny shall be spent wisely. Never keep your HDR10/Dolby Vision 4K video contents stored on HDD for years.

Note that only a 64-bit version of DVDFab 11 contains the UHD Copy module. 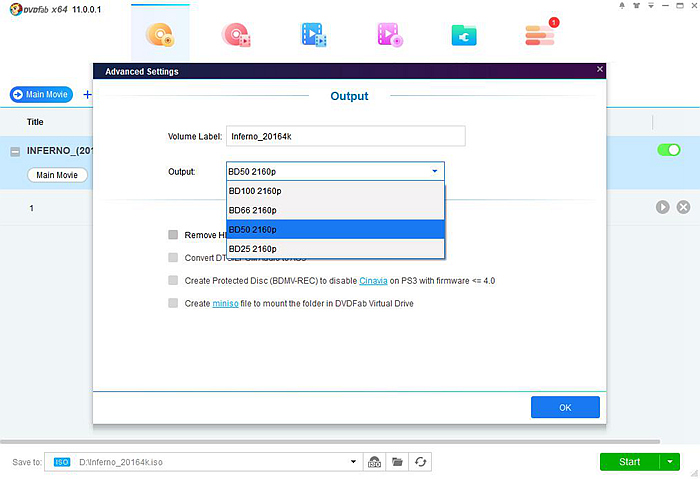 How to burn 4K Blu ray fast and well? This 4K UHD Blu-ray burner ensures you high-quality disc and fast burning speed. Above all, it allows for three copy modes to suit all your personal needs with considerate and customized settings.

Now you have gained a better understanding of the common types of 4K Blu ray burners and mastered how to burn 4K Blu ray with the world’s only professional 4K Blu-ray burners: DVDFab UHD Creator and DVDFab UHD Copy. These two best 4K Blu ray burners can meet all your personal needs to create stunning 4K Blu-ray content playable on the 4K home theater system. By the way, if you encounter an unfriendly 4K Blu-ray drive when burning 4K Blu-ray, remember to downgrade unfriendly firmware on 4K UHD Blu-ray drive with professional UHD Drive Tool so as to ensure a smooth backup task.

Price: $99
You May Need Other Tools
DVDFab UHD Copy

Copy 4K Ultra HD movies from the original disc, save them as lossless or compressed ISO files or burn them to blank BD50/25 discs