Summary: Are you looking for the best free Blu ray player software to play Blu rays, be it Blu ray discs, ISO files, or folders? This post gives you a full picture of the top five Blu ray software to play and watch movies in Full HD quality. Read on to take your best pick.

Want to have the best Blu ray player software to watch your Blu-ray movies with better video quality? What is the best free Blu ray player software? First of all, let’s face reality. Blu-ray is the latest storage standard for high definition entertainment. When actually nobody cared about the video quality, compact discs were used. Subsequently, CDs or compact discs were overcome by DVDs because of their larger storage. But for 4K UHD entertainment, Blu-ray discs proved to be the optimal storage standard because of their large storage size (nearly 5 times the size of a DVD) and better image quality.

Based on operation tests and user reviews, we have collected the best free blu ray player software able to play blu ray on pc and Mac computers. Each of them has its own advantages and disadvantages. In terms of overall performance, DVDFab Media Player ranks first on the list. Now let’s check the following Blu ray software player one by one.

DVDFab Player 6 Ultra is not just meant for playing several Blu-ray discs, but designed for real ultra-high-definition entertainment on a 4K TV display or a 4K monitor. Since you can always use your 4K TV as a PC monitor then it would be the best option for a real 4K viewing experience, let alone working as a standard Blu ray media player. Just connect the TV to your PC via an HDMI cable and set the optimal resolution settings. Above all, the full compatibility with PC and TV modes enables you to enjoy large and small screens, the best way to achieve a 4K UHD viewing experience at home. It is a good Blu ray player for PC and Mac users, with a free trial available.

As the best 4K media player, DVDFab Blu-ray player software utilizes the processing power of your graphics card (NVIDIA GeForce GTX 9 series or higher) to deliver eye-catching crystal-clear entertainment on your 4K TV screen, specially designed for high-end graphics card keeping the real entertainment in focus. Though it will work with low-end graphics cards it comes with a certain clarity difference. 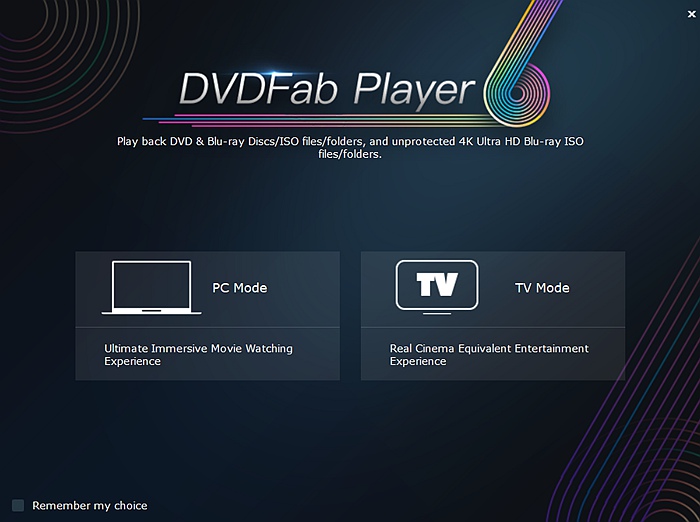 DVDFab Blu ray player software is not just limited to playing Blu-ray discs, it also enables playback for Blu-ray ISOs and folders, fully compatible with UHD MP4, 3D Blu-ray, and UHD MKV formats, and supporting Hi-Res audio output such as Dolby Digital, Dolby Digital Plus, Dolby TrueHD, Dolby TrueHD Atmos, DTS:X, and DTS-HD Master. This is not it, its HDR10 feature actually upscales the picture quality by utilizing your PC’s graphics card’s power. Besides, this Blu ray player PC and Mac program acts as a media library via poster wall to build, organize, and manage smart local video/movie/disc/music library, and can automatically load Blu-ray and DVD discs as ISO file for later playback. With a pair of 3D glasses, you can watch 3D movies at home theater. 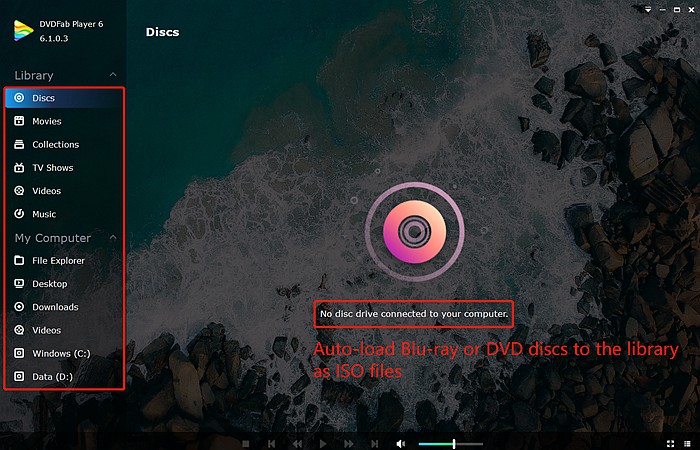 What makes this Mac and PC Bluray player stands out from the rest is that it supports navigation meu on DVDs, Blu-rays, and 4K Ultra HD Blu-rays. After all, good menu navigation is the gateway to a stunning playback control experience. Meanwhile, this PC Blu ray player software allows you to enjoy all forms of 3D content with optimal quality. 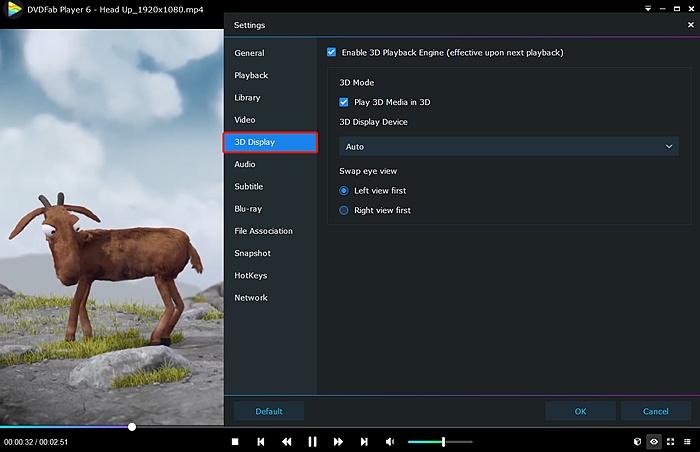 Warm tips: this best Bluray media player is available on Windows and Mac, with a 30-day free trial. Thus, you can enjoy this Blu ray player program via Blu ray player software free download from its official website. Besides, you can enjoy all region-coded Blu-ray movies without limit, because it is a region free Blu-ray player.

VLC is a free and open-source cross-platform media player that can play most multimedia files such as DVDs, Audio CDs, VCDs, and various video formats. As a free Bluray player, it can play Blu-ray discs allowing for select ‘Blu-ray’ in the playing menu. Though the VLC media player can be considered nice Blu ray player software, it comes with some limited features. For instance, it can’t play DRM protected BDs or that is protected by Cinavia watermark. Although you’ll get all the basic and most of the advanced Blu-ray player options in VLC, it is still not suitable for a 4K TV display. The entertainment will be satisfied because you are getting it for free, but should not expect high-quality performance. Anyway, it is capable of selecting the Blu-ray menu, selecting dual audio, customizing subtitles, and applying real-time video effects. Therefore, make do with this free Blu-ray player Windows and Mac program (also Android and iOS) if you have a fairly tight budget.

Media Player Classic (also known as MPC) is a completely free media player. Being a free Blu ray media player, it can play unprotected Blu-ray discs. But when it comes to playing a DRM-locked BD, then MPC won’t recognize it. It's a basic and free Blu ray player software tool and only designed for a PC computer. Moreover, it can’t utilize your graphics card’s power for upscaling the clarity, neither does it support any 3D Blu-ray content. It’s only good if you don’t have a 4K TV at hand but want to watch Blu-ray disc movies on your PC.

Downside: only for Blu-ray disc play, no 3D support

CyberLink PowerDVD is the oldest media player that exists even today. It is an advanced Blu-ray player software just like DVDFab Player 6. It also uses an upscaling algorithm for ultra-high-definition entertainment. You will find most of the features of DVDFab Media Player in PowerDVD. But unlike DVDFab Blu ray player software, PowerDVD only supports limited computer hardware. It always demands a powerful CPU at least 7th generation Intel Core processors, high-end GPUs, powerful motherboards. While DVDFab Blu ray player program will also work smoothly on a Pentium Core 2 Quad CPU. So PowerDVD may not work as advertised and also it is pricier than DVDFab Player 6. So, unless your computer’s hardware fits in with the system requirement section, you should not go for this Blu-ray player software.

Downside: only for standard Blu-ray disc, no 4K support

PART 2: How to Play Blu ray on PC & Mac with DVDFab Media Player

After knowing the top 5 Blu ray software to play Blu rays on PC, it's imperative that you should dive into the best Blu ray player Windows 10 & Mac program and figure out how to use it. First and foremost, let's summarize what flagship features DVDFab Player 6 boasts.

Aside from being a top-notch Blu ray player, it can be treated as the best Windows Media Center alternative, since Windows 10 has given up its original Windows Media Center application, replaced by Groove Music. For most users who own home theater system, it's a must to look for a all-purpose media manager and player to manage and play all sorts of media files. That's the most important thing in home entertainment.

But how to use DVDFab Blu-ray Software to Play Blu ray on PC & Mac?

Whatever updates have been released, DVDFab never forgets its original intention. That is, a handy but professional program with an intuitive and clean interface to deliver the ultimate user experience. To cut a long story short, it takes no shortcut to master how to use this Blu ray player software Windows 10/8/7 and Mac program.

Here you can insert a Blu-ray movie disc into your PC's optical drive, or add Blu-ray ISO or folder to the local library of the media player. Even click File Explorer from My Computer on the left pane to search your Blu-ray movie stored on PC. 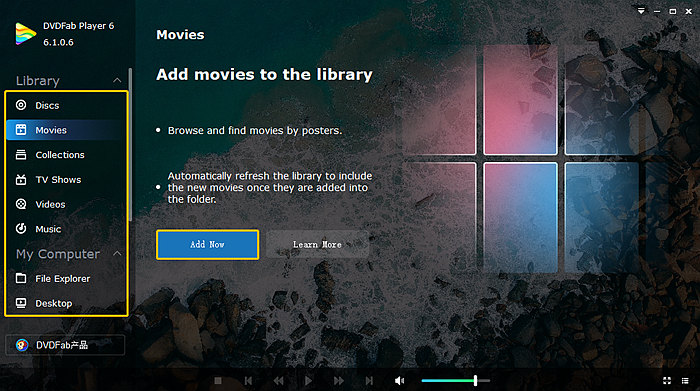 In this way, you can enjoy your Blu-ray movies with better image quality. By the way, if you are a member of the DVDFab DRM Video Downloader, you can use this streaming video downloader to download streaming videos from Netflix, Disney+, HBO, Prime Video, and Hulu, and then Play the downloaded 1080p titles with DVDFab Player 6. This will be a smooth transition to enjoy your downloaded movies or TV shows. For example, you can watch Netflix download and share it with your family members or friends.

In this article, we just listed some of the best free Blu-ray player software (paid for advanced features). And we have concluded that to get the ultimate 4K UHD cinema-like experience, you had better choose DVDFab 4K video player. If you have powerful hardware comprising of Intel Core 7th generation processor, the latest motherboard, powerful graphics card, then go with PowerDVD Blu ray player software. It is unlikely to have the powerful computer hardware that PowerDVD demands. And if you are just looking to play some of your Blu-ray discs, then you can go either with MPC, VLC, or Leawo Blu ray player programs. The final decision is up to you.

3-in-1 video converter to convert and edit videos & audios