Summary: Are you looking for handy but professional blu ray burning software for Mac so that you can watch HD movies on Blu-ray player software? Here we list top 5 best Bluray burners for Mac with powerful features enabling you to burn videos to Blu-rays (discs/ISOs/folders) on Mac easily and quickly. Read on to take your pick from below listed Mac Blu ray Burners.

Knowing the best Blu-ray burners for Mac shall be given top priority before mastering how to burn Blu-ray on Mac. Actually, do you remember we have witnessed a storage media transformation from CD to DVD and to Bluray? Nowadays, Bluray with large storage space (say 25GB single side) has become the default media for high-definition movies, including Blu-ray players and gaming consoles. That's why there are so many 1080p bluray movies and people all have a strong desire for a good Blu ray burner mac program.

Today opportunities to download and purchase videos online motivate us to store them on Mac hard drive. With the help of Blu ray burning software Mac purchased online videos can be saved in a BD disc so that we can enjoy them in a Blu-ray player on PC. What's more, we can also burn Bluray Mac and transfer it to a TV with a USB stick. Then backed-up Blurays will last up to 15 years which is the life expectancy of a BD disc.

Can I burn Blu-ray on my Mac? What is the best Blu ray burner for Mac? Would you like to burn Bluray on Mac with best Blu ray burning software compatible with Mac? All these questions will be covered in this post. Here, I have listed the 5 best Blu-ray Burning software for Mac that will transfer the high definition entertainment from your Mac’s hard drive to your HDTV’s screen. Let's check these out.

DVDFab Blu-ray Creator is handy but professional blu ray creator software for Mac. It has got a lot of features and its interface is easy to use. The good thing about this Mac Blu-ray burner is you merge multiple videos or movies before burning to a blank disc with it. Also, you have more control over selecting the audio language of a dual audio movie. You can customize your movie’s playback menu with pre-installed templates and add texts or images of your own. This Blu ray burner Mac works almost with every video format ever known. You can burn download Anime movies to a Blu-ray disc, folder, or ISO file. 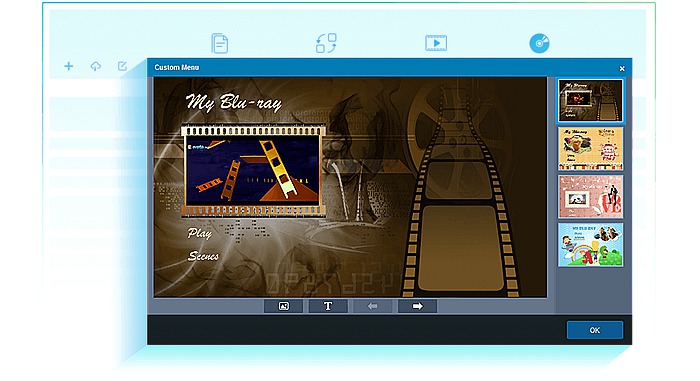 You can also make multiple copies and save the loaded video as an ISO file that can be later burned to a blank disc.  This Blu ray burning software Mac uses Intel’s quick sync and Nvidia’s CUDA technology which really makes the burning process fast. And if you are directly burning to a blank Blu-ray disc then don’t worry as this Mac Blu-ray burner will also be completed within few minutes. DVDFab Blu-ray creator is highly recommended as most of the software is incompatible with Mac. Though it is not free software but is definitely worth your money and you already have the option to try this Blu ray burner Mac before buying. So, this should be the first Blu-ray burning software for Mac that you should try. Download Netflix movies and save them using this program.

Leawo Blu-ray creator is another Blu ray burner Mac. It is fully compatible with Mac OS 10.8 and allows you to burn Bluray on Mac directly to a blank BD disc, including Bluray folder or ISO files. This Mac Blu-ray burner also provides tools to edit movies like trim, crop, adding watermark. With this Blu ray burning software Mac you can also convert plain 2D videos to 3D Blu-ray content. And it supports the most common video formats.

Above all, this burning software for mac allows for a 30-day free trial. You can make your own Blu-ray movies without spending any coin. If you want a regular view of the home theater system, then you might as well turn to its subscription plan.

Now let’s take a quick glance over how to burn Blu-ray on Mac in 3 simple clicks.

Free download and install this burning software for mac program. Click the + button and load the video source, or drag & drop it onto the main UI. 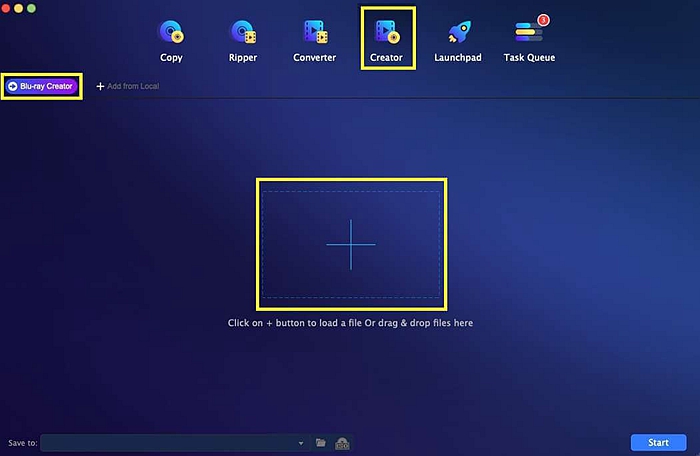 Click the Advanced Settings to set parameters for output Blu-ray. Then turn to the Menu Setting to choose your desired menu template and add-on customized features so as to make the output Blu-rays more personalized and professional. 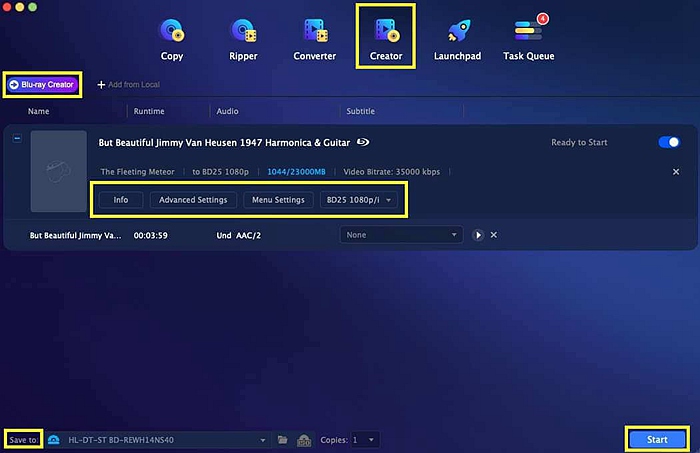 Once done, hit the Start button to initiate the burning process. You can burn Blu-ray on Mac in batch via this best burning software for mac. 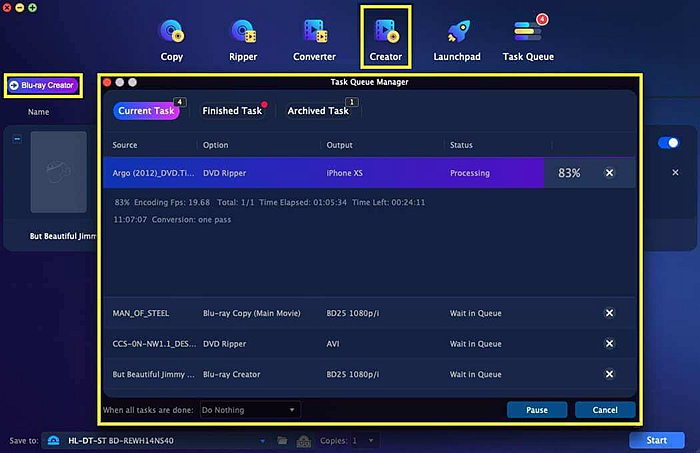 Within three simple steps, you can make your own Blu-ray movies from collected or downloaded videos.

Roxio Toast 16 Pro provides an easy way to burn your favorite movies to blank BD discs. This Blu ray burner Mac provides around 100+ themed templates to create the disc menus. It also provides a simple drag, drop, and burn approach. Along with the burning feature you get, the audio and video editing tools in this Blu ray burning software for Mac makes your movie even more polished for a high definition entertainment. It also provides an option to burn BD discs readable only on a Mac system. You can use it to burn download Disney movies to a disc for offline enjoyment.

Express Burn, another Blu ray burner Mac, employs the same drag, drop, and burn approach. This Mac Blu-ray burner supports all video formats with a DirectShow based codec. With this Bluray burner Mac, you can create and manage chapters on BD discs. It also supports dual-layer BD disc recording. However, this Blu ray burning software is not as advanced as DVDFab but works satisfactorily if you want a simple software for the Blu-ray burning purpose.

imElfin is a Blu ray burning software for Mac that can create a Blu-ray disc from any video. This Mac Bluray burner also provides 40+ templates to customize your disc menu. You can edit your movies with tools like cut, crop, and apply effects. Similar editing tools can be found in DVDFab Blu-ray creator. You’ll be impressed by its capacity for converting plain 2D videos to 3D Blu-ray format. Just like DVDFab, imElfin Blu-ray creator is able to preserve the multi-audio track of a movie after burning it to a blank BD disc. And there is no need to mention that this Blu ray burner Mac supports almost every video format and can also convert videos to ISO images.

From physical DVDs to Bluray format of videos, movies’ definition is higher than before. In order to enjoy such HD Blu-rays on Mac, a Bluray drive for Mac, especially a huge external Bluray burner Mac, matters a lot since Bluray files can be enormous. So where to find a Bluray drive for Mac able to read, play, and write Bluray discs? Maybe you can find one on Amazon or Best Buy. As to which is the best Bluray driver for mac, it all depends on your needs and the price you can accept.

While searching the internet for free Blu ray burning software Mac you may not find many options. Because options are limited for Mac OS. The five Blu-ray burner software that we have listed in this post can be considered as the best bluray burner for Mac featuring DVDFab. This Blu ray burner Mac has a history of 15 years and understands a user needs better than the other developers. There is no hurry. Just try every software mentioned above and start with DVDFab Blu-ray creator. All of these Blu ray burning software Mac come with a 30-day money-back guarantee and DVDFab is almost fully functional for a month. You may not get other Blu-ray burning software for Mac fully functional for an entire month just like DVDFab Blu-ray Creator for Mac.

This post lists the top 5 best Blu ray burning software for Mac, but if you also want to rip some of your Blu-rays, please check out how to rip Blu-rays to MP4/MKV/AVI/MP3 and more. By the way, if your male friends want to make Blu-ray movies for private play with videos downloaded from various video streaming platform, you can recommend him this best burning software for mac. Meanwhile, seeking a professional but versatile video downloader will make things much easier.