Does Xbox One Play DVDs? Of Course!

Summary: Can U watch Blu ray on Xbox One? Does Xbox One play DVDs? This article shows you how to play DVDs on Xbox One with the dedicated Blu-ray Player and how to convert DVDs to Xbox One supported videos with DVDFab DVD Ripper.

How to watch DVD on Xbox One? Xbox is one of the most popular home video game consoles developed by Microsoft. Can Xbox One play DVDs? As the successor of Xbox 360, Xbox One also comes with an optical drive that can be used to play back not only DVDs but also Blu-rays. The newly released Xbox One S and Xbox One X even can play 4K UHD Blu-rays and 4K video sources with HDR10 support. But most people find Xbox One not working. Why?

How much do you know about playing DVDs? Just get a disc stuck in Xbox One, right? Mostly, Xbox One not reading disc when you insert a disc to your optical drive.  You may think the playback of a DVD movie is as easy as inserting a DVD disc to the disc tray of Xbox One, but the fact is that you still need to turn to a separate app to do the playback job. Apart from that, Xbox One won't play disc due to a region code. Therefore you should first convert the DVDs to Xbox One compatible video formats. So how to play DVDs on Xbox One? Now please follow me to get through the ways of playing DVDs on Xbox One.

Part 1: Fix Xbox One Not Reading Disc by Converting DVDs to Xbox One Formats

Does Xbox One play DVDs? In order to avoid various Xbox One problems, it is simple and much safe to rip and convert DVDs to Xbox One compatible video formats and play them on Xbox One directly through a USB stick or your network-attached storage. Let me tell you the reasons for that. First, when you play DVD on Xbox One, there may exist some DVD copy protections such as region code, Disney copy protection, etc., which stop you from causes Xbox One not reading disc. Second, Xbox One S and Xbox One X can play DVD discs safely in a vertical position, while the 2013 Xbox One can only play DVD discs in a horizontal way, so you are at the risk of damaging your DVD disc, if you get a disc stuck in Xbox One directly.

Then, the best solution to fix Xbox One not reading is to use a DVD ripper to convert DVD to Xbox One digital formats, so that you can play DVD videos on Xbox One successfully. DVDFab DVD Ripper supports DVD to MPEG 4, AVI, MPEG 4, FLV, M2TS, MKV (Apple ProRes), MP4 (Apple ProRes, Mobile, Theater), TS, WebM, and WMV formats. Thus, you can convert DVD to MP4 and play DVD on Xbox One easily. How long does it take to rip a DVD to Xbox supported formats with this free DVD ripping software? Just a few minutes. With the support of advanced hardware acceleration technology, this DVD to Xbox One digital converter can output high-quality videos at a lighting fast speed, 10 times faster than the other free DVD rippers. If you want to edit a DVD video, there are also built-in video editors available, such as 'Advanced Settings' and 'Video Edit'.

Now, let's see how to watch DVD on Xbox One by converting DVD to Xbox One supported video formats like MP4.

This free DVD to Xbox One digital converter is available on both Windows 10/8.1/8/7 and macOS 10.10 - 11.3. Is DVDFab DVD Ripper safe? Yes, it is virus-free. With the assistance of this software, you can fix Xbox One not reading disc easily. 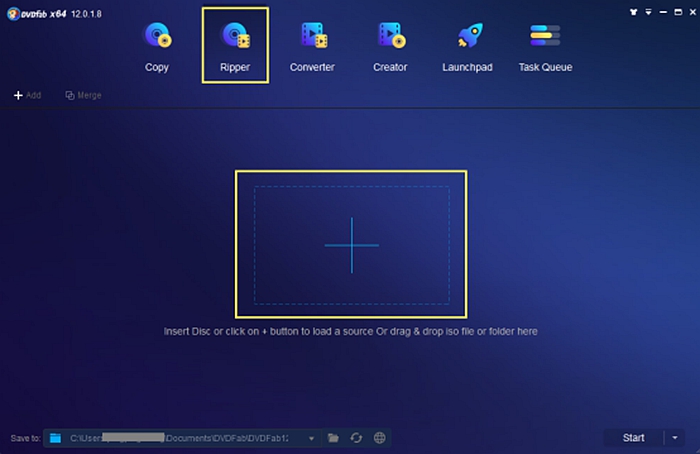 How to watch DVD on Xbox One? Convert DVD to Xbox One supported video format. Which format do you want, MP4 or others? With the help of DVDFab DVD Ripper, there are two ways to you convert DVD to Xbox One digital formats. First, click 'Choose Other Profile' > 'Format' > 'Video' and select 'MP4'. Alternatively, click 'Choose Other Profile' > 'Device' > 'Micorsoft' and choose your preferred output device - Xbox One. You can click Format > Video > Filter > 4K to choose a 4K format you want. 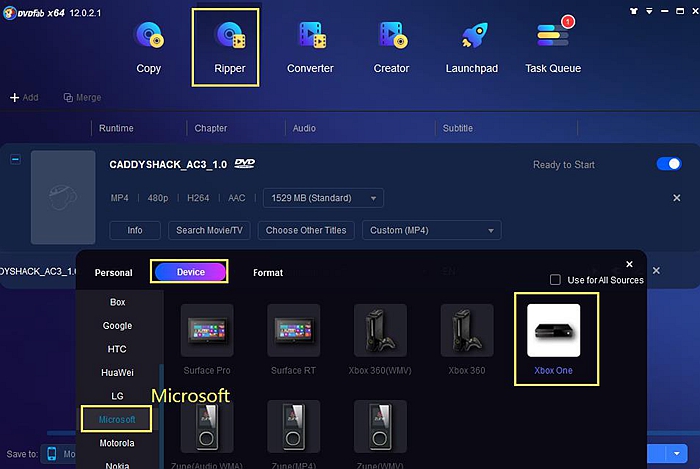 Can you watch Blu ray on Xbox One? The main movie title has been selected by default, but now you can click the “Choose Other Titles” to select the titles you want. You can also change the title name and select the audio tracks and subtitles you like. 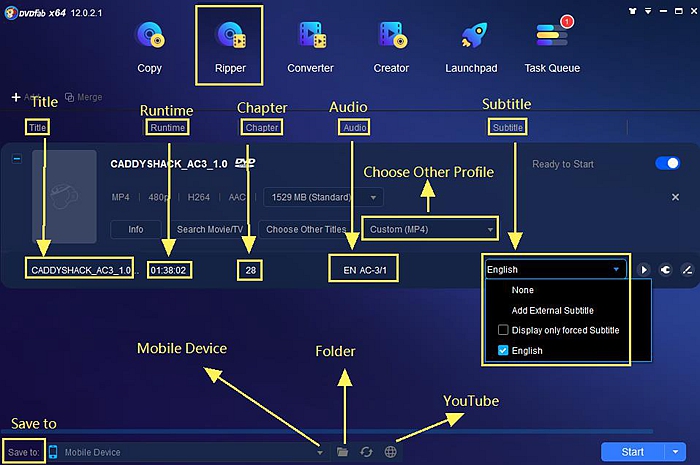 There is also “Advanced Settings Panel” for you to tweak your settings like codec, frame rate, resolution, etc., and 'Video Edit' tool to trim, crop videos, add watermark and subtitles, adjust picture values, and more. 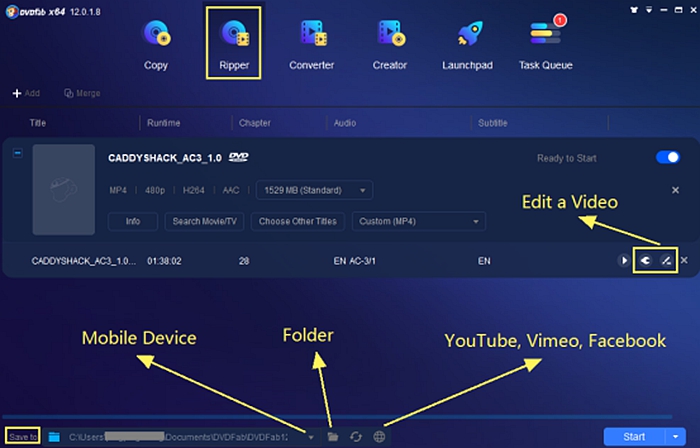 Step 4: Set the output destination and start to convert DVD to Xbox One digital

The last step for playing DVD on Xbox One. Move to the bottom of the main interface and click the “folder” icon to select a directory to save the output video. And then you can click the “Start” button to start the process of ripping the DVD to Xbox One.

Part 2: Play DVDs on Xbox One with the Dedicated Blu-ray Player

How to play DVD-R on Xbox One? The playback of DVDs or Blu-rays on Xbox One is not as intuitive as you think, and there are some extra steps involved. Microsoft doesn’t bundle a DVD/Blu-ray player with Xbox One, so you need to download and install the dedicated DVD/Blu-ray player first. Now I will make you go through the detailed process to fix Xbox One not reading disc.

Steps on how to watch DVD on Xbox One:

You can also install the Blu-ray player by inserting a DVD disc into the optical drive. The steps are as follows:

More Information about playing DVD on Xbox One:

Xbox One S is more advanced than the Xbox One. On the one hand, it enlarges the storage capability, from 500GB to 2TB; on the other hand, it allows you to play over 100 console exclusives and a growing library of Xbox 360 games. In addition, it is only consoling with 4K Ultra HD Blu-ray, 4K video streaming, and HDR. So if you are using Xbox One S and wondering how to play DVDs on Xbox One S? Here are the tips for you.

Xbox One S play DVDs:
(1) Insert your DVD disc into the Xbox One S.
(2) Choose the Blu-ray Disc app as soon as it appears
(3) Install it from its details page
(4) The DVD disc starts to play automatically

With the help of DVDFab DVD Ripper, it is easy to convert DVD to digital in any format you want and play it on any device you like. For more information about how to edit DVD with this free software, read the article of DVD to Digital: How to Upload a DVD to YouTube.

Table of Contents
•Part 1: Fix Xbox One Not Reading Disc by Converting DVDs to Xbox One Formats
•Part 2: Play DVDs on Xbox One with the Dedicated Blu-ray Player
•Conclusion