How to Rip Blu-ray to iPad, iPhone, Xbox 360, And Other Devices


Blu-ray is the modern medium for watching movies in high definition. And obviously, for playing a Blu-ray disc you’ll need a Blu-ray player. But can you watch your Blu-ray movies on your Apple devices like iPhone, iPad, or any other devices like Xbox 360, Samsung smartphones, and phones like Huawei Mate? The answer is a big YES. You can do this by ripping your favorite Blu-ray disc to a device-specific video format.

To start ripping your Blu-ray disc to your iPad, Iphone, or any other device you should first download and install DVDFab 11. If you’re a Windows 7/8/10 user then you should either download the 32-bit or the 64-bit version. Check the download links below.

DVDFab Blu-ray Ripper provides pre-configured video profiles for many devices. You just have to load these profiles to apply the best possible output video settings. However, not all the devices are listed in this software. So we have divided the tutorial in two parts. One part is for the listed devices and another part is for the unlisted devices. 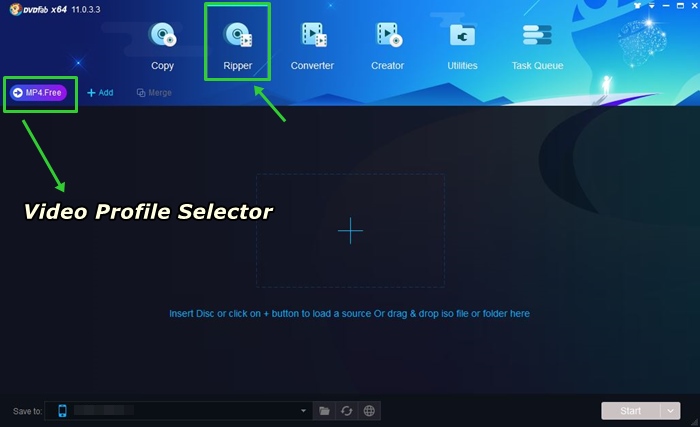 ·         Click the ‘Video Profile’ selector button and click the ‘Device’ tab. On the left most side of the software window you can see a list of many devices. 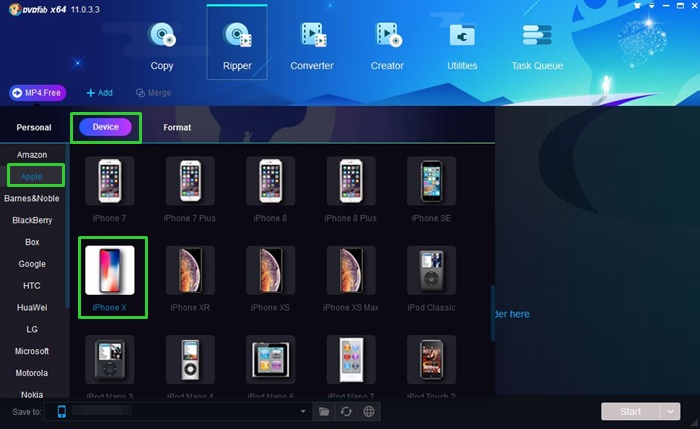 ·         Here we are selecting iPhone X profile. You can check your device against these pre-configured video profiles and select the right one.

·         Now we have to load the source which can be a Blu-ray disc, Blu-ray ISO, and a folder. Click the ‘+Add’ button to load an ISO, or a folder, or directly insert the Blu-ray disc in the BD-ROM drive.

Note: A Blu-ray ISO is an exact copy of the physical Blu-ray disc which has all the data which is stored on the disc. The Blu-ray ISO file is highly portable and isn’t prone to scratches. You can directly burn this ISO to a blank BD. Similarly a Blu-ray folder is an exact copy of the Blu-ray’s movie data. The data is stored in a group of folders that’s why we refer it to as a Blu-ray folder. DVDFab 11 has full support for working directly with Blu-ray ISOs and folders.

·         Now after loading the Blu-ray disc, ISO, or a folder the software interface will change to this below. Also check the informative labelling. 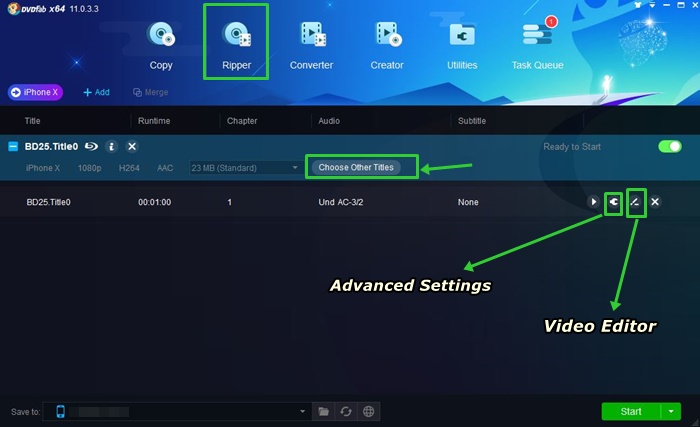 ·         If you are an advanced user then first click the ‘Advanced Settings’ and check whether you want to customize several settings like ‘Resolution’, ‘Bit-rate’, ‘Video Quality’, ‘Frame Rate’ etc. 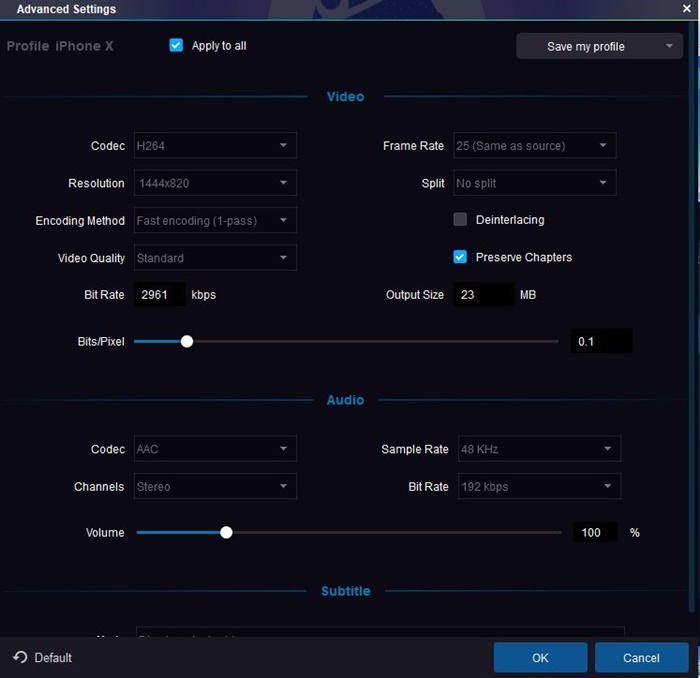 ·         There’s a wonderful option to increase the audio up by 500 percent. This is beneficial for videos having very low audio output. Check the ‘Volume’ slider in the image above.

·         Click ‘Choose Other Titles’ button and select other Blu-ray titles for ripping because by-default only the main movie is selected for ripping. So, you should check this whether you want to rip other titles too along with the main movie.

Note: Main movie is the largest video/movie file stored on your Blu-ray. This movie is the main movie and is different from other movie files like extras, bonus videos, making of type videos which may be present on the Blu-ray disc. 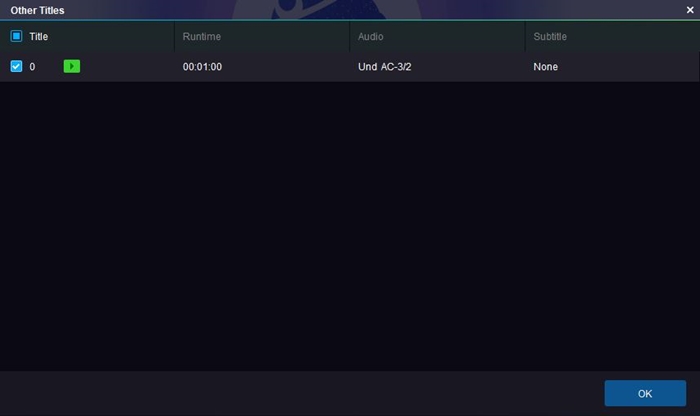 ·         You can select or deselect multiple movie titles from here. You can also play a particular movie title to check whether you are selecting the right movie title or not. Click the green play button to play the movie. Click ‘OK’ to go back. 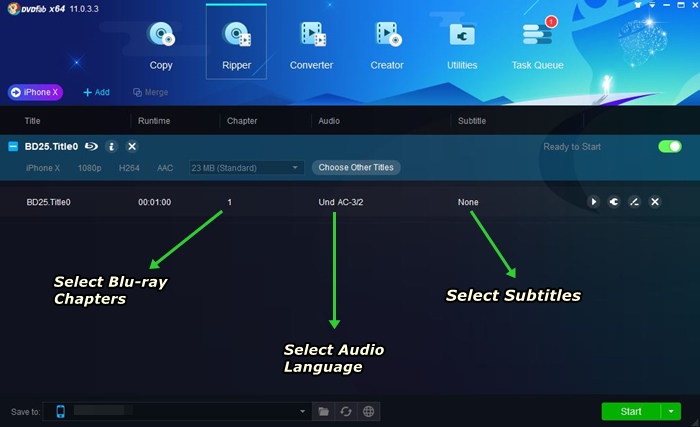 ·         If you want to edit your videos then click the ‘Video Editor’ button. This will launch the buil-in video editor and you can edit your Blu-ray movies before ripping.

·         If you want to check the video editor then move to ‘Part 2.3’ below or else click the ‘Start’ button to rip your Blu-ray disc to iPad, iPhone and other devices.

If your device isn’t listed under the ‘Device’ section then don’t worry because you can still rip your Blu-ray disc to a compatible format supported by that particular device. This device can be a TV, home theater, or any other media player with a USB support. These types of media playing devices do support portable formats like MP4 or MKV. So, it is better to rip your Blu-ray discs to such formats if your device doesn’t have a device-specific video profile in DVDFab Blu-ray Ripper. Follow the steps below.

·         Open the DVDFab 11 software and click the ‘Ripper’ tab. Click the ‘Video Profile’ selector button, then click the ‘Format’ tab and select the output video format supported by your device (say MP4). 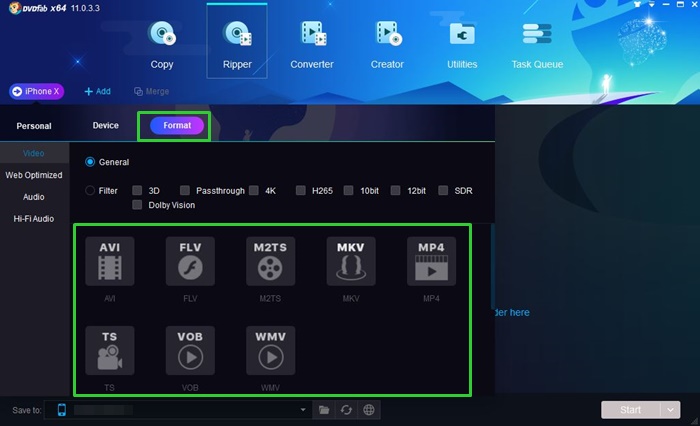 ·         Simply click the ‘Advanced Settings’ button and customize the video settings yourself because this is not a pre-configured video profile.

·         After ripping process gets over, go to the output folder, copy the video to your device and enjoy. TVs can play these ripped videos via USB flash drives.

DVDFab Blu-ray Ripper gives you an option to edit your videos before ripping. The main functions of the video editor are as follows. 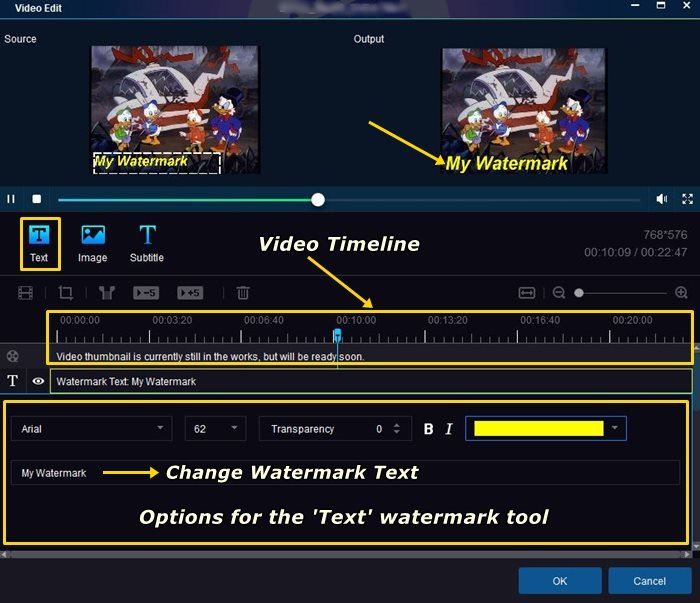 2. Image Watermark: You can use any image as a watermark too, control its transparency, location on the screen, and its size. For this purpose use the ‘Image Watermark’ tool. 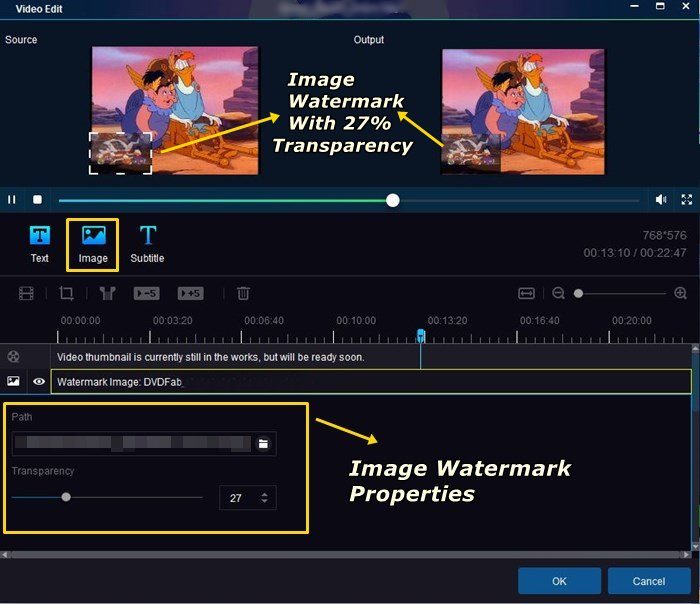 3. Crop: Use this function to crop the video. Click the ‘Crop Tool’ and drag the white edges towards the center of the source video’s frame to set a crop area. You can preview the cropped video in right side. 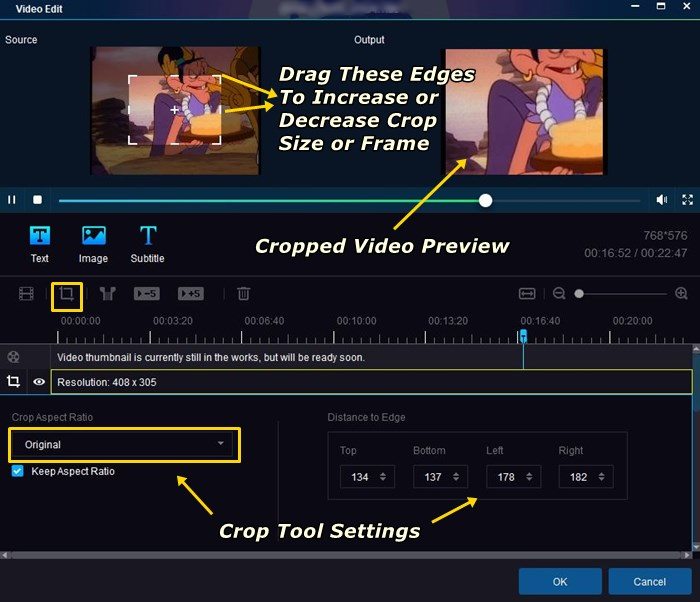 4. Trim Tool: If you don’t want several scenes in the finally ripped video/movie then use this function. This tool can also be used to apply multi trims at once. Click the ‘Trim Tool’ button to apply a trim section on the video timeline. Move the ‘Blue T Marker’ out of the current trim section and click the trim tool button again to add another trim section. Use the ‘Trim Invert’ button to invert selection. This will invert the selection and select the video parts outside the trim sections. 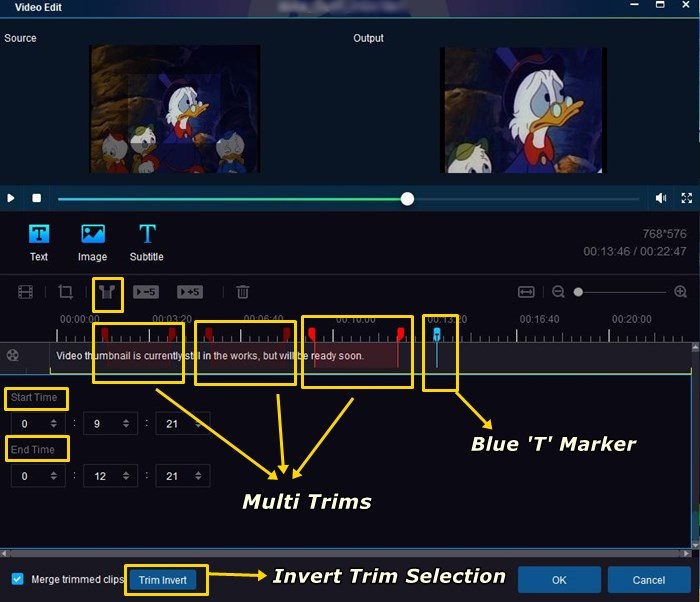 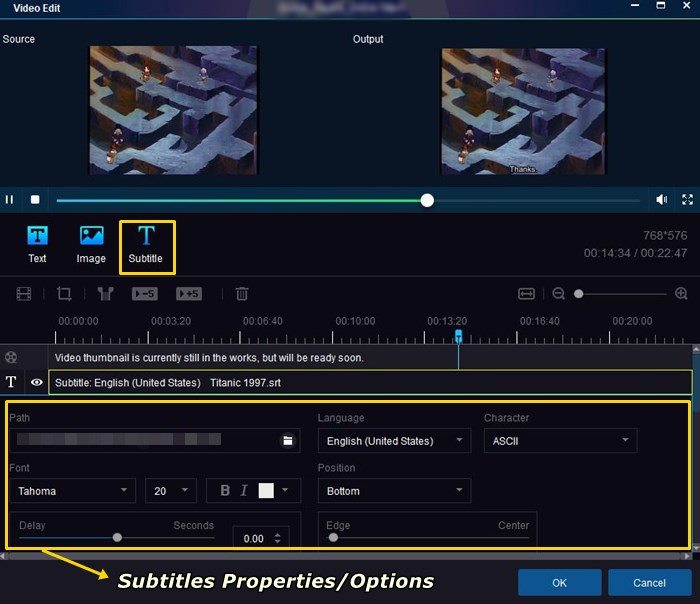 6. Video Properties: Use this tool to change the video brightness, contrast, and saturation. You can also rotate the video by 90 degrees to left or right. 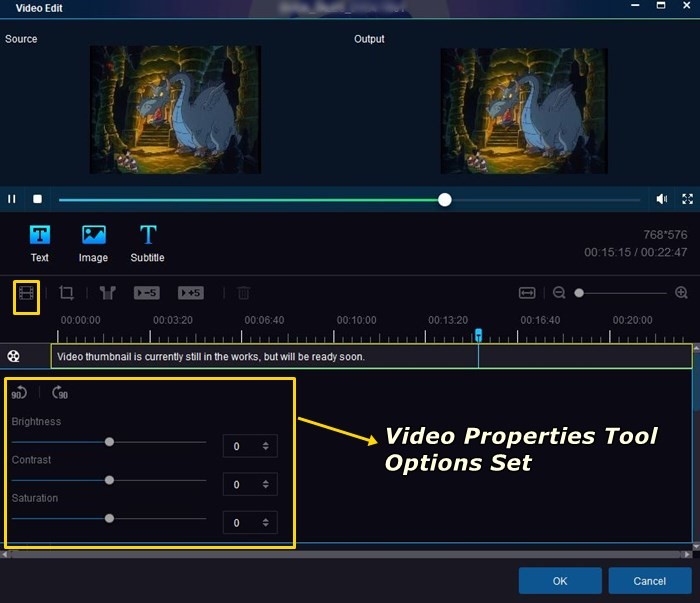 So, these are the main functions of the DVDFab’s video editor. You can use it if required.

Here are some considerable reasons to choose DVDFab Blu-ray Ripper for ripping your Blu-ray discs to iPad, iPhone, or any other device.

·         Supports a large number of inbuilt, pre-configured, device-specific video profiles. Each device profile is already set to its best settings.

·         No need to customize the video profiles unless you are an advanced user or unless your device isn’t listed.

·         Apple devices have limited support for non-apple content unless it is properly encoded. DVDFab Blu-ray Ripper takes proper care of this and auto loads the best output video settings for Apple devices.

·         DVDFab Blu-ray Ripper also removes various Blu-ray disc encryptions and protections. Other software may not remove those protections, so they even won’t rip protected Blu-rays.

·         Apart from device-specific format you can also rip your Blu-ray disc to portable formats like MP4, AVI, MKV, FLV etc.

We hope, from now onwards if you ever need to rip your Blu-ray disc to iPad, iPhone, Samsung devices, gaming consoles etc. then you will always choose DVDFab Blu-ray Ripper. It is a feature rich Blu-ray ripping software program which can convert any Blu-ray disc to a particular device’s video format. However, suppose if unfortunately the device isn’t listed but supports MP4, MKV, or any other known video format then you are still covered by this wonderful software. It’s just a matter of few clicks which will let you watch your favourite Blu-ray titles on your handheld devices on the go. So go ahead and test the software yourself to check how best it performs for you?

For converting video sources to various devices, you may refer to how to convert videos to iphone X, iPad, Samsung Galaxy, etc.