Copy Blu-rays to blank Blu-ray discs or to computer HDDs saved as ISO files or folders, with up to 5 backup modes.

Why does Blu ray decrypter have so many followers? Blu-rays stands for high definition entertainment up to 1080p, while 4K UHD Blu-ray discs are capable of giving 4K picture quality. The desire for HD movies drives people to invest in Blu ray player. Considering Blu-ray discs are expensive and easily go bad with time going on, many people want to copy Bluray to hard drive and keep them eternal. But latest Blurray movies often come with some sort of encryptions to prevent illegal viewing and copying. With the help of free Blu ray decrypter, you can save lots of money and back up of encrypted BD disc easily. That's why Blu ray decrypter is so popular. Today in this article, I will intorduce the best top 6 Blu ray decrypter in 2020 for you.

DVDFab Blu-ray Copy is the best Blu ray decrypter for copying and decrypting BDs. With five unique copy modes supported, this free Blu ray decrypter distinguishes itself from its competitors. If you choose this Blu-ray decrypter,  it will be easy to decrypt encrypted Blu-ray discs and copy them to your PC or a balnk disc including BD50 and BD25. You can also save decrypted BDs as ISO, or folder based on your needs. With the help of this Blu ray decrypter software, you can also compress a Blu-ray disc content to fit into a BD25 blank disc or an ISO or a folder. Subsequently, let's have a look at its five copy modes.

Copy the entire Blu-ray disc to an ISO (BD50,BD25) or a folder or directly burn it to a blank BD50 or BD25 under this copy mode supported by this DVDFab Blu ray decrypter.

"Main Movie" mode supported by this free Blu ray decrypter enables you to copy the main movie and skip the rest. You can also ‘Choose Other Titles’ and select multiple Blu-ray chapters for copying and save them as an ISO, folder, or burn to a blank BD50/25 disc. Only one title can be selected at a time in ‘Main Movie’.

Make a copy and burn the Blu-ray content to another blank BD50/25 in a 1:1 lossless ratio.

Copy any content from the Blu-ray disc you want with this Blu ray decrypter free. A Blu-ray has multiple video files. So in ‘Customize’ function you can choose which video files you want to copy and which videos you want to skip. You are also allowed to select chapters, audio, and subtitles.

Merge multiple Blu-ray discs in to one single BD.

With so many copy modes provided by this Blu ray decrypter freeware, which is your favorite? Choose your desired copy mode, decrypt your Blu-ray disc and make a backup which can be saved on a hard drive.

Faster Conversion: DVDFab Blu-ray Copy is empowered by Intel Quick Sync, Nvidia CUDA, and AMD acceleration, offering a fast speed. Based on your PC’s hardware DVDFab Blu ray decrypter will choose the best technology to boost the Blu-ray copy and conversion process. High end PCs are more capable of using these technologies for even lightning fast performance during copying and conversion.

DVDFab Blu-ray ripper decrypter is a perfect tool for ripping encrypted Blu-ray discs. This Blu ray decrypter software can rip and decrypt Blu-ray discs and convert videos from one format to other common mainstream formats like MP4, MKV, or AVI. Also there are many video profiles available in this free Blu ray decrypter. With the help of this Blu ray decrypter freeware, you can watch ripped BD movies on any device conveniently.  For example, if you save the ripped Blu-ray content on your computer’s hard drive, you cannot only watch it on PC , but transfer them to other portable devices like iPad. This Blu-ray decrypter also provide pre-configured device profiles for many devices like smartphones, tablets, and gaming consoles. It can also convert entire movies to audio files with this Blu ray decrypter. What's more there is a video editor embedded in this free Blu ray decrypter featuring a "wrench" icon, you can use it for multiple trims, rotate, crop, watermark, and subtitle. Here’s an image showing its user interface.

Note: Blu-ray ripping isn’t an easy task as it requires a powerful hardware for video conversion. But thanks to DVDFab Blu-ray ripper as it employs Intel Quick Sync, Nvidia CUDA, and AMD Acceleration. These technologies help increase the conversion process performance and larger videos get converted in least possible time.

Decrypt and copy entire Blu-ray disc to a folder. For creating ISOs and burning a blank BD50 you will need ImageBurn.

Copy the main movie from a Blu-ray disc. If you select this copy mode then the longest movie title  will be selected by default.

Important Note: To use ImageBurn as a third party burning engine you will first have to install it then go to ‘Common Settings’  by clicking the ‘Eject’ button just before the ‘Minimize’ button in DVDFab program. Now click ‘Drives’ and then select ‘Blu-ray write’. From the ‘Burnin Engine’ list select ‘ImgBurn’ and you can now burn blank BD50 discs and create ISO. If you think it calls for to many efforts, just choose other free Blu ray decrypters you feel easy.

This Blu ray decrypter is a trialware but worth your money. It is able to remove and decrypt BD+ copy protection in a Blu-ray disc. And it can convert your Blu-ray movies to common video formats.

If you are looking for a completely free and simple Blu ray decrypter then check out Aurora Blu-ray Copy. It’s a free  Blu ray decrypter software for decrypting and copying Blu-ray discs to ISO files. It only does one thing which decrypt any Blu-ray and make an exact copy of BD as ISO file. It is a very limited Bluray decrypter but is fast when used for Blu-ray copying and decrypting. There are no options to select in this software so it is the simplest of all and does one thing. If you don’t want many functions and don’t want to invest money in paid Blu-ray decrypters, then this Blu ray decrypter is suitable for you. It is cross platform compatible and works on Mac and Windows 10.

Winx Blu-ray Decrypter Windows 7 helps users to decrypt and back up Blu ray to M2TS. This Blu ray decrypter is able to remove AACS MKB v 25, BD+ copy protection in a Bluray disc. With the asssitance of Winx Bluray decrypter, you can keep your Bluray discs from scratch or loss. It supports two copy modes, with “Full Disc Blu-ray Backup” and “Title Copy” included. 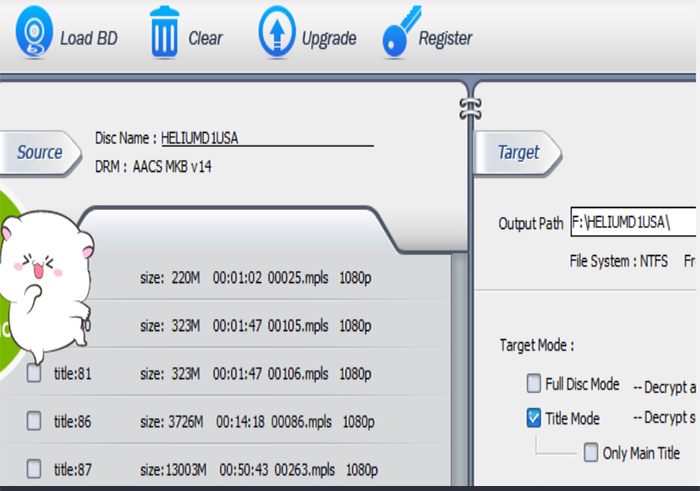 If you want to decrypt DVD movies on your windows, you can try these DVD decrypters for Windows.

Featuring the most advanced Blu-ray copy technologies, DVDFab Blu-ray Copy allows you to make premium backup copies to your legally purchased Blu-ray movie/TV Show discs at home, for non-commercial use. With 5 versatile backup modes catering various demands, you can copy your Blu-rays in the way that fits your situation best.